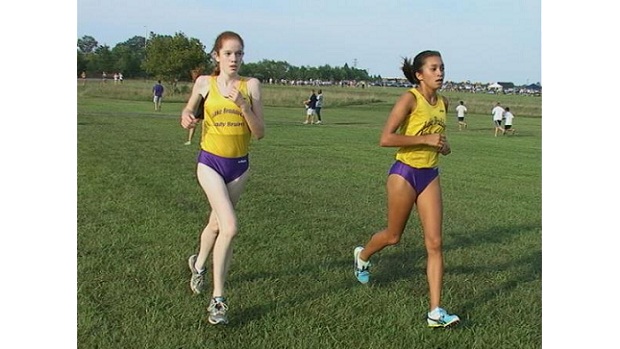 Returning Foot Locker finalists Ahmed Bile of Annandale and Sophie Chase of Lake Braddock began their 2011 cross country seasons on Thursday by running the fastest times among all races at the Potomac River Running Kick-off Relays at Bull Run Regional Park in Manassas. The runners for all schools were spread out in races based off their grade levels with the freshmen and sophomores running separate races, while the juniors and seniors ran a combined race together. Lake Braddock junior Sophie Chase was able to easily outdistance herself from the others in the junior/senior race as she won by a margin of 31 seconds to runner-up Sarah Jane Underwood of West Potomac (12:10) with her final time of 11:39, which was only three seconds off her time from one year ago on the same course. Bile did not runaway from the field like Chase did, but neither did he try to as he waited until the end to pull away from Lake Braddock junior Nicholas Tuck (10:21) for the best time of the day at 10:16. To put in perspective the times run on the Bull Run Regional Park's 2 mile course for the kick-off meet, Tuck broke 9:20 for 3200 meters on the track this past June. The grass was reportedly higher than last year's races to also slow times.

It was tough to read how the teams matched up against one another since some teams top runners are actually their sophomores and freshmen, which would be misleading then to only look at the team scores from the junior/senior races. In a merged scoring of all three races, the hypothetical winners were the Thomas Jefferson boys with 65 points and Lake Braddock girls with 62 points. It was expected to be a close match-up with Lake Braddock, West Potomac, Thomas Jefferson, and Bishop O'Connell for the girls, but few predicted the Thomas Jefferson boys to be the superior team of the meet as they were ahead by a significant margin against pre-meet favorite James Robinson by 57 points in the results merge. TJ's top five times averaged to 10:46 for the group and only 24 seconds separating fastest performer Andrew O'Shea (10:37) from their fifth fastest runner Dylan Keightley (11:01).

To be fair to the pre-meet favorites James Robinson, they were racing without two of their top five runners in David Janas (16:54 5K PR) and Nick Marshall (17:08 5K PR). The pre-season pecking order was certainly shaken up and turned on its head with the following places as well with two 2010 state qualifier squads West Potomac and Lake Braddock squads underperforming, while Herndon, Westfield, and Thomas Edison exceeding expectations. Edison raced without their top runner in sophomore Louis Colson as his addition would have certainly moved them up the rankings in the merge.

The Lake Braddock girls (62 pts in merge) almost made it a clean sweep of individual winners in all three races with Sophie Chase (11:39) in the junior/senior and Hannah Christen (12:08) in the sophomore taking first place finishes individually, while freshmen Ally Robinson (13:08) was second in her race behind only James Robinson's Lauren Berman (12:44). Berman is the younger sister of Jared Berman, who currently runs for Virginia Tech and competed in the IAAF World Junior Championships last summer in the steeplechase. Robinson's emergence is promising for Lake Braddock to add in the pieces to build around two sub 11 minute two milers in Chase and Christen as well as sophomore Katie Roche to make a state meet podium run this fall.

West Potomac (66 pts in merge) had one more girl run under 13 minutes than Lake Braddock, but Lake Braddock had two girls run faster than West Potomac's fastest finisher Sarah Jane Underwood (12:10) to help Braddock hold their Patriot District rival off by 4 points in the results merge. Joining Underwood under 13 minutes was Dale Lescher (12:45) and Colleen Boyle (12:55), while West Potomac was missing their #3 returnee Sophia Passacantando (19:33 5K best) on Thursday evening.

Not far behind both Lake Braddock and West Potomac as far as their overall team performance among the three races was Thomas Jefferson, which netted 75 pts in the results merge. The TJ girls had a few more key losses to graduation than Braddock and West Potomac from a year ago, so new faces have emerged into varsity roles for them at the start of the season. Katherine Sheridan (12:27) and Sarah Nielsen (13:11) are key returnees from last year, but others including freshmen Katrina Junta (younger sister of recent grad Lisa Junta) are new. Their team was also missing Rekha Schnepf (11:42 3200m), which her return would help them close the gap.

Add your photos from the meet here!