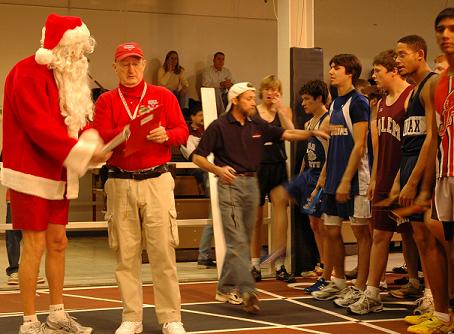 The Liberty Christmas Invitational turned out to be the meet of the weekend as seven state best performances were found at the first annual meet. The Blacksburg girls (90 pts) and Hermitage boys (55 pts) won team titles as the Blackburg girls blew out the field with their dominance in the distance events and relays, while the Hermitage boys barely squeaked out the win over three other teams in the hunt.

Four of those state bests belonged to two athletes in St. Catherine\'s Katie Doswell and E.C. Glass\' Carlton Phipps. Doswell posted a fine distance double on the Tolsma Track Center 200 meter indoor track as she won both the 1600 (5:05.82) and 1000 (3:05.83) meter races in state leading times. Her meet was a positive sign she may be returning to her form of last indoor season when she ran one of the fastest times in U.S. high school history for 1000 meters (2:47.10). 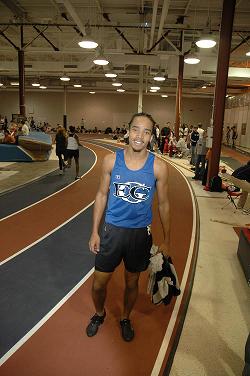 Meanwhile, Phipps had two dominating first place finishes with victories in the 500 meter dash (1:07.35) and 300 meter dash (35.81). Phipps had one of the state\'s fastest times outdoors at 800 meters and will look to use his speed to do some big things this outdoor season.

Buffalo Gap senior Angela Jenkins already had a co-share of the high jump state best at 5-4 and sole claim to the triple jump at 38-4 from her performances at the Walt Cormack Relays last weekend. At Liberty this weekend, Jenkins put her triple jump best further out of reach for the rest of the state\'s jumpers as she hit a personal best of 39-8 to win the triple jump competition. To go along with her personal best performance in the triple jump, Jenkins posted another one in her first place clocking of 7.36 in the 55 meter dash as well as winning the long jump (18-4) to give her three victories on the day.

Blacksburg also picked up an additional ten points in the 55 meter hurdles from a first place by Annie Grant with a clocking of 9.00. 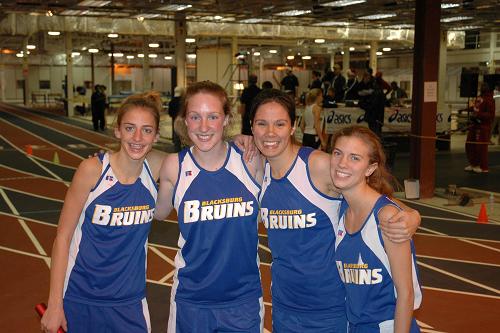 The Lady Bruins would close the day in winning style as they finished first in the 4x400 meter relay with a time of 4:20.07.

Deep run\'s Katelyn Zimmerman and Brianna Hudson denied Jenkins (3rd, 5-0) from winning four events on the day as they finished first and second respectively in the high jump with clearances of 5-2.

The meet was also the first competition for Hermitage senior Queen Harrison who had to end her outdoor season early last spring due to breaking her collarbone. Her performances were rusty as expected finishing fourth in the long jump (16-10) and third in the triple jump (36-4).

Christiansburg\'s Hope Creasy won her second major invitational of the season in the shot put with a toss of 37-5.

A relay victory and two first place finishes in the distance races help to push the Hermitage boys over the rest of the competition to win the team title. In the 4x800 meter relay, the Panters posted the state\'s fastest time to win in a time of 8;22.21. Fastest leg Alex Bowman would then later double to win the 1000 meter run with a solid 2:36.91 clocking, while teammates John Vial (2;42.43) and Kiernan Lee (2:44.06) finished third and fifth respectively. In the 3200 meter run, Hermitage went 1-2 in the event with Nathan Puckett as the race winner at 10:05.31 and Ben Hendrick taking second in 10:16.51.

The Jefferson Forest boys were nearly able to catch the Hermitage squad as they finished only half a point behind them in the final team scoring (54.5 pts). Less than two seconds and one place was the difference as the Jefferson Forest boys closed the meet finishing second in the 4x400 meter relay (3:37.51) to the spoilers Heritage (3:35.90). 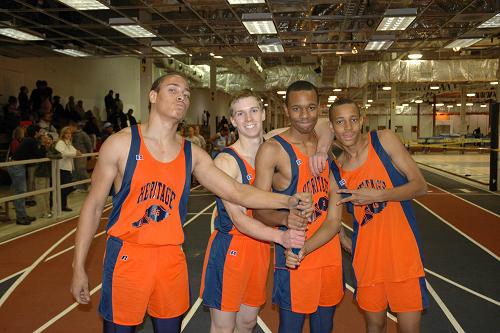 The Heritage boys could not simply allow the Jefferson Forest boys to win the 4x400 meter relay either as they found themselves in the team hunt as well as they finished third with 51 points.

Wayne Ferguson led the squad as he won the long jump competition (21-10) over Halifax\'s David Anderson (21-6.75), while the two switched places in the triple jump with Anderson (45-1.50) finishing first and Fergsuon (43-5) taking runner-up honors. Anderson\'s mark in the triple jump is the state\'s best to date.

Christiansburg senior John Horst took the win in the 1600 meter run with a 4:36.46 clocking, while Group A schools were well represented with Nelson County\'s Anthony Haliburton winning the high jump in 6-2.