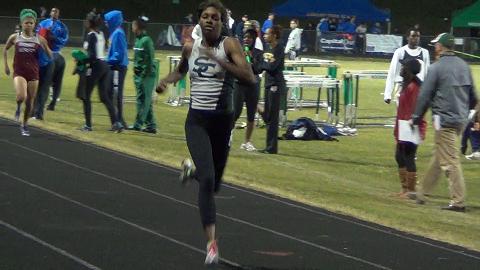 Other top performances from Woodbridge on Friday night:

Osbourn Park's Breanna Walker clocked a state leading FAT time of 12.17 in the 100 meter dash, while also doubling back later to go 1-2 with teammate Kiana Hairston in the 200 meter dash. The Osbourn Park girls dominated the sprints with relay victories in the 4x100 and 4x400

C.D. Hylton's Hali Mcfadgen and Heritage's (Leesburg) Marcus Finney both swept the hurdle races with Mcfadgen posting times of 14.99 (100H) and 45.29 (300H) respectively, while Finney defeated previous state leader Chris Blaylock of Battlefield with a VA #1 performance of 38.64 in the 300 meter hurdles.

The girls SMR saw Battlefield and Forest Park loading up with their top two half milers on anchor between Ellison Grove for Battlefield and Brianna Krumholz for Forest Park, which led to some quick times in the rarely contested event with Battlefield as the winners at 4:08 and Forest Park trailing in second at 4:10.  Meanwhile, the Forest Park boys were not only able to win the boys' sprint medley in a solid time of 3:38, but also take the 4x100 meter relay as well in 43.62.

The throwing events were dominated by two individuals between Battlefield's Galissia Cause and Fauquier's Luca Carrillo as each thrower claimed first in both the shot put and discus. Cause went big with her first throw ever over 40 feet in the shot put at 42'9.50", while Carillo had a breakthrough performance in the shot as well with his first 50 footer at 51'2".

Group AA is starting to become the place for quarter milers this spring with Loudoun County's Steven Graham running a 48 second open 400 two weeks ago and now Fauquier's Thomas White knocking on that door as well. White won the 400 meter dash at the Gojekian Twilight Classic with a lifetime best time of 49.17 to follow up his 49.58 victory at the Knights Track Classic last weekend.

More to come from the Gojekian Twilight Classic...

Race Videos - To be posted later this weekend