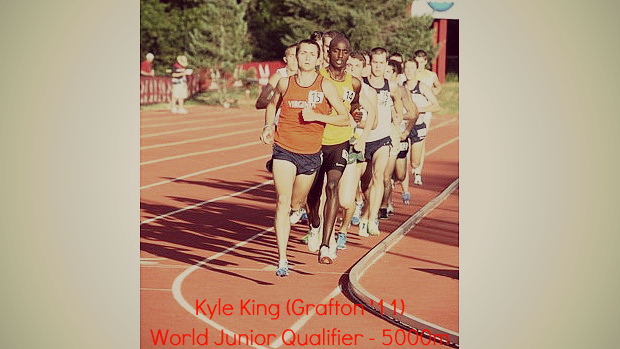 Grafton graduate and current University of Virginia distance runner Kyle King is in Barcelona, Spain this week and will be racing in the 5000 meter run on Saturday at the IAAF World Junior Championships. King qualified for the World Juniors 5K by finishing second at the USATF Junior Nationals last month in Bloomington, Indiana with a time of 14:28.26. King is the lone former Virginia high school prep representing the state on Team USA's 2012 World Junior Championship meet roster.

At Grafton High School, King was a state champion in cross country, indoors at 1000 meters, and outdoors at 3200 meters as a senior. Under the guidance of new UVA men's distance coach Pete Watson, King has only continued to develop and improve in college as a Cavalier including earning All-ACC honors in the 5K as well as running a swift personal best of 13:55 earlier in the outdoor season at the Colonial Relays.

King is writing a blog for the official University of Virginia athletics website while in Spain. Click here to read his blog leading up and following his race in Barcelona.