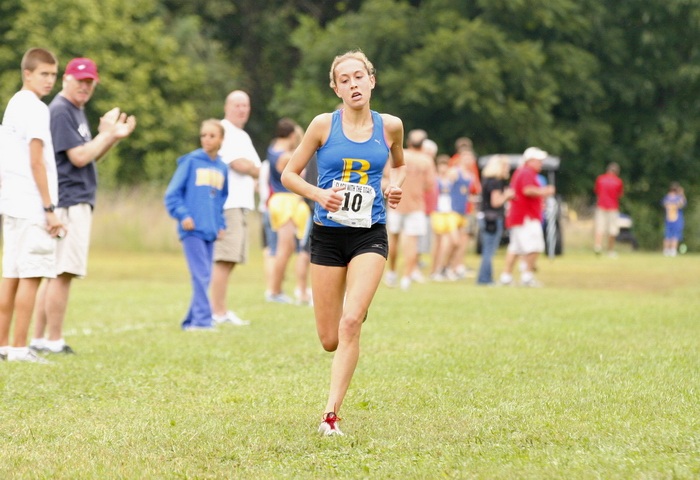 Defending Group AA state champion and VA #3 ranked Carolyn Bethel destroyed her home course record and dipped well under the 20 minute barrier which no girl had yet to do on the Hidden Valley course on Saturday at the Clash with the Titans. The problem though was that Bethel's impressive 19:25 effort was outdone 12 seconds earlier by Blacksburg sophomore Bonnie Angermeier crossing the line first and bettering the old course record by 52 seconds in a eye opening victory. AA state title already looked to be a two runner showdown between Bethel and Cave Spring's Katie Fortner. Add another River Ridge runner into the state title contending discussion with Angermeier following her breakthrough 19:12 win at Clash with the Titans.

Despite missing two of their top five returning runners in Claire Ewing-Nelson and Jennifer Fleming, the Blacksburg girls were still atop the team standings against their top competition Group AA in Christiansburg (2nd, 78 pts), Jefferson Forest (3rd, 81 pts) and Hidden Valley (4th, 116 pts). Coach James Demarco had two talented sophomores leading his Blacksburg girls' squad in Angermeier and Emily Beatty. Beatty, the team's top returning 3200 meter performer (11:12 PR) from this past spring, also went under the old meet record with her third place effort of 20:05. Next across the line for Blacksburg was a freshmen who will help Blacksburg continue to be a state powerhouse in future years with Olivia Hodge (9th, 21:04) breaking into the top 10 for her first high school invitational race.

Christansburg girls edged out Jefferson Forest for second place due to stronger front running with Allison Sherman (6th, 20:33) and Megan Burns (7th, 20:50) getting ahead of Jefferson Forest's front two in sophomores Alyssa Shupe (10th, 21:09) and Erin Saunders (11th, 21:13). Christiansburg almost left the door open for Jefferson Forest though with over a two minute gap for their top 5, while defending Region III champions were under 1 minute for their time spread. 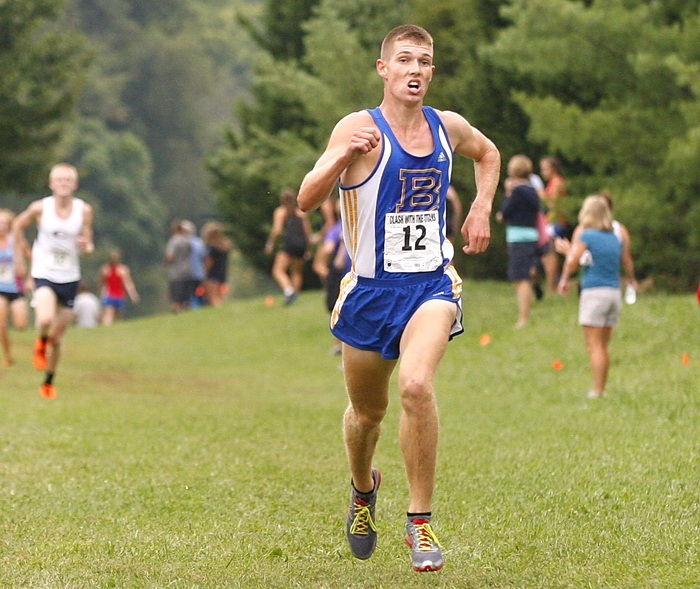 It was expected that Blacksburg runners Matthew Borny and Noah Combs would be challenging for their first invitational wins among other ranked runners from other schools at Saturday's Clash with the Titans since the Bruins top runner Nick Link was being held out. However, it was another Blacksburg runner in Luke Phillips who apparently did his running homework over the past few months as in his summer training to surprisingly leap frog quite a few higher ranked runners as he pulled away from Christiansburg's Zach Chase in the end for a 16:52 victory and helped a short-handed Blacksburg squad (missing #1 runner Nick Link, Matthew Paiser and Combs) win the team title at Hidden Valley.

Brentsville made the long trip from Nokesville to matchup against Region IV's best and nearly was able to return home with a first place trophy. Their squad was tightly packed with only 36 seconds existing between their top five runners consisting of Corey Tooke (7th, 17:18), Ben Lemons (10th, 17:31), Mike Blair (11th, 17:34), Richard Knab (16th, 17:43), and Kyle King (19th, 17:53). After not making it to the state meet last year, Brentsville looks to not only make it back to Great Meadow this fall but compete for a top 3 state meet podium finish.