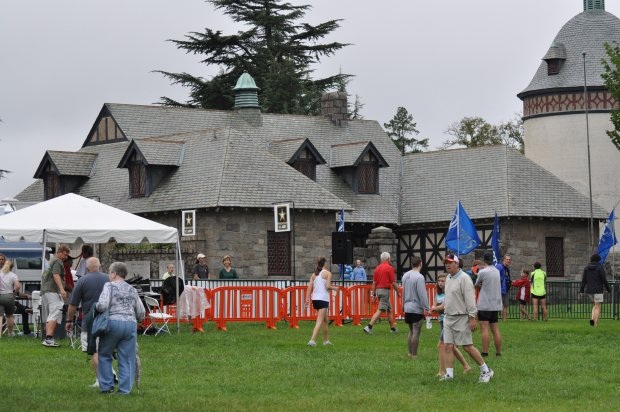 High school preview of the 10th annual Maymont X-Country Festival to be held Saturday, September 29th at Maymont Park in Richmond. MileStat.com will be on-site with coverage. 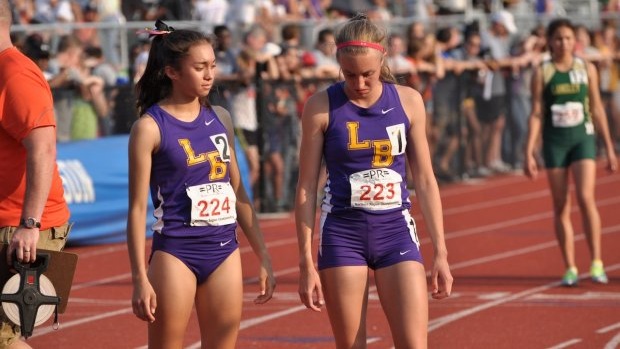 Sophie Chase and the Lake Braddock girls will be making their first trip to Maymont Park this weekend for the Maymont X-Country Festival. The VA #2 ranked Lake Braddock girls led by the state's top two runners in Sophie Chase and Hannah Christen will be favorites in the invitational division at Maymont on Saturday. It will be the first 5K race of the season for the Lake Braddock squad, who have previously ran 2 miles at the =PR= Kick Off Invitational, 2.98 miles at the Monroe Parker Invitational, and 2.5K at the Braddock Relays. The two All-American two milers Chase and Christen can push each other to go after the course and meet record of 17:42 set by Carolyn Baskir from North Carolina in 2009. The toughest challengers to the Braddock girls this weekend come all the way from Missouri in the Lee's Summitt West girls. The defending Missouri 4A state cross country champions from Lee's Summitt West have three girls who ran under 19 minutes for 5K last season in Kiersten West (18:44), Kennadee Williams (18:50), and Samantha Phillips (18:56).

Next group of teams include West Springfield, Maggie Walker, Ocean Lakes, and Jefferson Forest. The VA #9 ranked West Springfield girls are coming off a big win two weeks ago at William & Mary, which they edged out VA #10 Maggie Walker down in Williamsburg. West Springfield has two runners capable of finishing inside the top 10 between Caroline Alcorta and Maddie Wittich. Alcorta may be the runner with the best shot at breaking up the Lake Braddock top two as she was a close runner-up to Christen earlier in the season at Monroe Parker Invitational and had a dominant win at the William & Mary Invitational with a time of 18:20 on a course which runs fairly similar in times to Maymont. 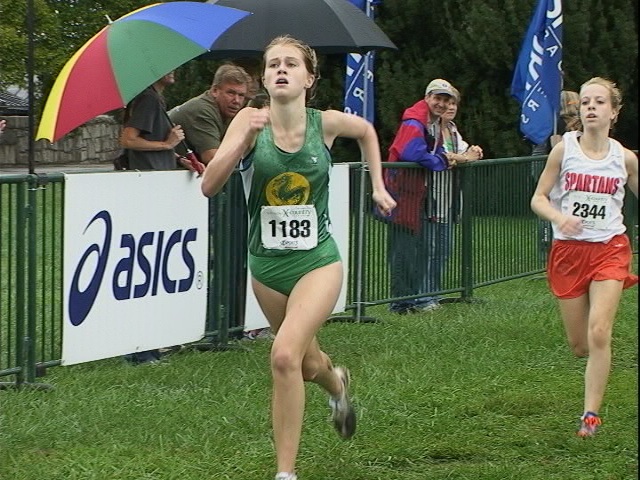 Maggie Walker was racing out with #2 returnee Daisy Banta at that point, but she recently returned to racing this past weekend and will be a big boost to their lineup as she works herself back into shape coming back from injury. Maggie Walker's top runner Rachel Galton is looking to bounce back from a subpar race at William & Mary and a race more like her opening performance of the season at the Newport News Invite when she clocked her season best 5K of 18:40. She is top returnee from last year's Maymont Festival when she placed 3rd in the invitational division with a time of 19:07, while Alcorta was right behind her in 8th at 19:08. 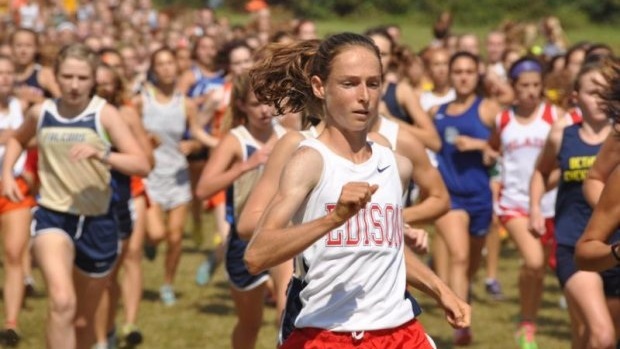 Also featured in the invitational division will be last weekend's Oatland Invitational champion Jennifer Flack of Thomas Edison. A recent transfer from Kansas for her senior season, Flack was able to pull away from a stacked field at Oatlands with a 5K PR run of 18:53. Flack will get to match up again at the top runners from her region (Northern) between Lake Braddock's Chase and Christen as well as West Springfield's Alcorta.

The Ocean Lakes girls are look for a much better team and individual performances than their first 5K invitational of the season two weeks ago at the adidas Challenge when they placed 7th down in Cary, North Carolina. The team lost two of their expected top 5 returnees from last year due to moves and transfers, so their two All-State runners in Nikki Park and Olivia Bethune will be relied on more to be strong front runners to help the back end of their scoring five. At last year's Maymont Festival, Ocean Lakes had an impressive 3 girls in the top 9 places between Park (5th, 19:08), Audrey Batzel (6th, 19:12), and Bethune (9th, 19:28) which helped to finish as team runners-up behind a nationally ranked squad from Tatnall in Delaware. Batzel has now graduated and moved onto UVA, but last year's Group AAA state cross country runner-up Park and Bethune are looking to show themselves as the state's top duo behind Chase and Christen of Lake Braddock on Saturday being in the same race with them.

After defeating VA #3 ranked Blacksburg girls this past Wednesday at the Metro Championships, the Jefferson Forest girls are looking to carry that momentum on Saturday and knock off a few more state ranked squads in Richmond. The James Madison girls are currently ranked in the top 15 in the state, while the Atlee girls have been ranked among the 15 best squads in the state earlier this season. 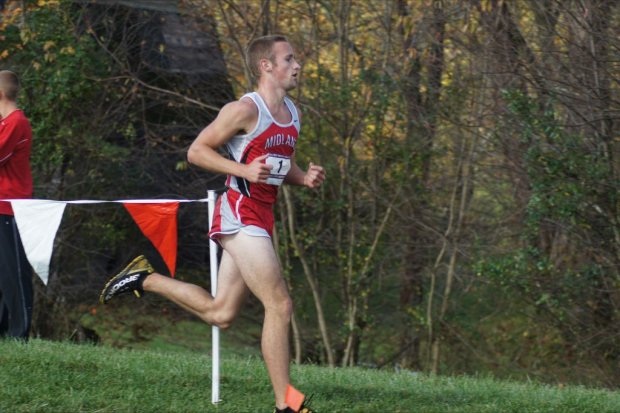 Headling the invitational boys' field at Maymont is MileSplit US #5 ranked Jacob Burcham and his Cabell Midland squad from West Virginia. Burcham has already ran 15:04 for 5K this season and the course and meet record of 15:31 could be in jeopardy with a talent such as a 4:02 miler in Burcham. Does not appear there is anyone in the field who could pull off such a huge upset, but there is quite a few of Virginia's best runners behind him in the field. 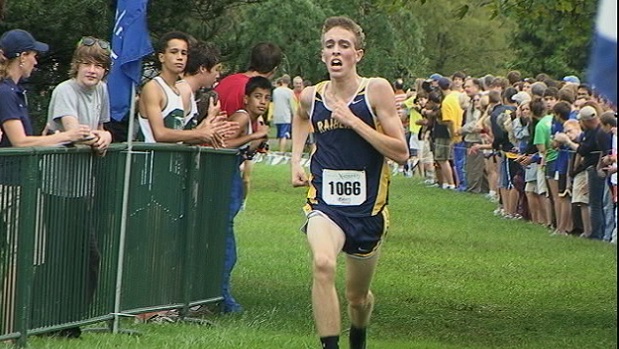 Defending Maymont Festival champion Patrick Joseph of Loudoun County is back. He will be hard pressed to defend his title with a national ranked runner such as Burcham in the field, but the defending Group AA state 1600 and 800 meter champion Joseph would like to be the first finisher from Virginia and defeat some of the runners who were ahead of him last week at Oatlands including Louis Colson of Thomas Edison and Nathaniel Hall of Atlee. 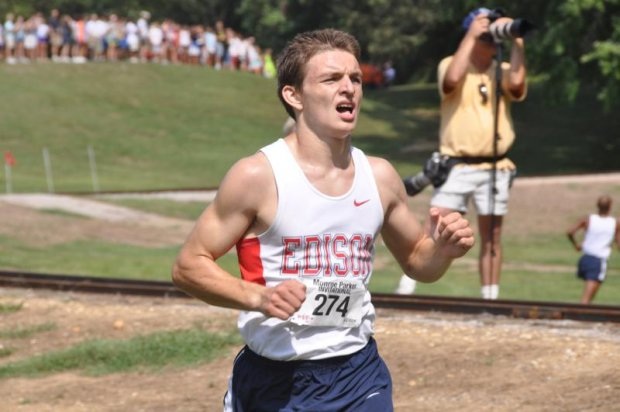 Colson has been running outstanding this fall with a win over Lake Braddock's Nick Tuck at the =PR= Kick Off Invitational and a recent runner-up finish at Oatlands defeating returning Foot Locker finalist Thomas Madden with his first sub 16 minute 5K at 15:51 on a challenging course. Speaking of Tuck, he will be at Maymont as well with his Lake Braddock team. He evened the score with Colson at the Monroe Parker Invitational with a second place effort of 15:16 on the Burke Lake Park 3 mile course. Tuck has the second fastest 5K PR in the field behind Burcham with a 15:24 best from last fall at Foot Locker South.

Atlee's Hall had two invitational at Fork Union and Woodberry Forest wins prior to his 9th place finish in a star-studded race at Oatlands last weekend. This weekend will be a great preview for the Central Region Championships for the defending regional cross country champion Hall as he will face two of his top challengers for a repeat between Douglas Freeman's Ronnie Calkins and Deep Run's Grayson Reid. Reid had a breakthrough victory two weeks ago at the William & Mary Invitational against Calkins to gain more respect as a threat to both Calkins and Hall within the region. The 9:15 two miler Calkins is anxious to rebound from William & Mary and race well against Hall and Reid.

Another out-of-state runner to take into account other than Burcham in the invitational boys' division is Cherokee (NJ) senior Shawn Wilson who has run 15:33 for 5K and is state runner-up at 3200 meters (9:14). Other individuals from Virginia who have been featured among the top 25 rankings at some point this season include defending Group A state champion Walker Mogen of Radford, Kurtis Steck and Jason Menzies of Lafayette, Billy Boros of Kellam, Reider and Mach Strehler of Trinity, and Ian McDonald of Douglas Freeman. Due to sanction rules with teams from other states, the Strehlers will not able to race against the top runners in the invitational division and will be placed in the second tier coastal division as well as their Trinity teammate Molly Breidenbaugh, who should be able to dominate the coastal division race individually.

Top 15 ranked teams in Virginia featured at Maymont include VA #7 Deep Run, #9 West Springfield, VA #11 Lake Braddock, VA #14 Lafayette, and VA #15 Western Albemarle. Deep Run and West Springfield raced well two weeks ago at William & Mary with Deep Run behind race winner Reid finishing second, while West Springfield relied on a tight pack for their top five for a third place team showing. West Springfield will also be anxious to race against their Patriot District rival Lake Braddock as the two teams figure to be battling at season's end for the district title, but potentially a state meet berth as well.

Both Lafayette and Western Albemarle had poor team showings in their last invitational meets with Lafayette finishing 5th at William & Mary with an off day from sub 16 minute runner Jason Menzies, while Western Albemarle was buried in the field at Oatlands especially with their top runner David Taylor struggling. Each team is trying to establish themselves along with Brentsville as that #2 team in Group AA with Blacksburg appearing to be head and shoulders above the rest in the classification currently. If Menzies and Taylor race well on Saturday, that should help both teams should place high at Maymont.

The Severna Park boys from Maryland were second last weekend at the Bull Run Invitational, which is essentially the state meet preview meet for Maryland schools on the state course at Hereford, so expect them to be competing for a top two finish at Maymont and maybe challenge Cabell Midland from West Virginia. Only three seconds separated their top three runners last week at Bull Run.