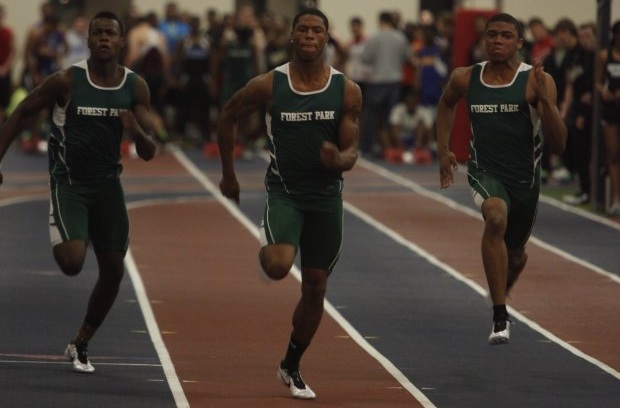 Coverage and highlights below from the Mid-Area Track Classic held on Saturday, January 19th at Liberty University's Tolsma Track Center in Lynchburg:

Mustaqeem Williams and the Forest Park boys were rolling in the sprints at Liberty with Williams throwing down personal best performances of 6.41 in the 55 meter dash and 35.04 in the 300 meter dash. The 55 meter dash time for Williams ties him for US #4 as three of the top five ranked runners in the short sprint are from Virginia. Forest Park went 1-2-3 in the both the 55 and 300 meter dash races with Williams, Ricky Morgan (6.58/35.36), and Joshua Washington (6.61/35.48). This group last week ran the nation's fastest time in the 4x200 meter relay, despite running on a flat track and could challenge to be one of the state's fastest ever in the event. The state indoor record in the event is held by the 2007 Deep Creek squad at 1:27.09. 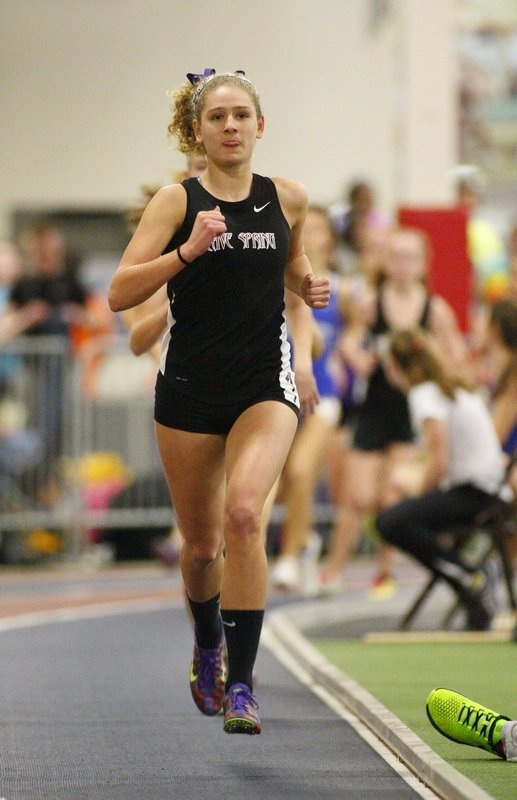 Katie Fortner (pictured right by Jon Fleming) is one of the state's best distance runners, but the Cave Spring junior can also jump too. Fortner won the high jump competition at the Mid-Area Track Classic with a successful clearance of 5'4". She also did work on the track in winning the 1000 meter run in a US #6 performance of 2:55.84 as she was able to break away from a talented field with Liberty Christian's Micah Brickhill trailing in second place five seconds later at 3:00.87.

An impressively tough double victory was completed by Liberty (Bedford) High School's Craig Danner as he held off Blacksburg's Kenneth Hagen for the win in the 500 meter dash with a time of 1:07.33, while coming back shortly thereafter to record a new personal best in the 1000 meter run by three seconds with his 2:35.80 effort. Danner has been a state qualifier in all of the past three seasons, but appears to have taken his running to another level to become an All-State runner as well this indoor track season.

After being rundown by Blacksburg's Kendell Wiles in the 500 meter dash last weekend at Liberty University, Pulaski County's Sydney Anderson evened the score in the 300 meter dash this weekend on the same track with a 41.41 victory over Wiles (41.71). Wiles earlier in the meet won the 500 meter dash (1:20.24), but much more comfortably and slower than last week when she ran a US top 5 time in the event against Anderson. Anderson was first place in a pair of events on Saturday including a new season best mark of 17'5" in the long jump as the field's best performance.

E.C. Glass junior Matthew Zajac went big in the shot put as he launched a new all-time best mark for him personally in the event with a VA #2 mark of 57'3.75". It is interesting to note that the state of Virginia has three throwers over 57 feet this season in Virginia's Nikolas Huffman (57'8.50"), Zajac, and Grassfield's Andrew Hines (57'2.50"), but they will not be seeing each other in championship season as they are all in different classifications. The defending Group AAA state outdoor champion in the discus, Zajac has really proved this winter that he can be equally as strong in the shot put by improving over 5 feet from last year in the event.

The Blacksburg boys showed just how deep they are exactly in the 4x800 meter relay as they split up their squads with an equally formidable "B" relay to their "A" relay and the "A" relay had to squeak out a 8:15.46 victory over its "B" relay right on its heels at 8:15.55. Few if any schools in the state of Virginia could spread their best 8 half milers among two relays and both run 8:15 or faster. Matthew Borny ran as one of those 8 relay legs for Blacksburg and came back on limited rest to win the 1600 meter run in 4:27.80. Borny rolled out a fast time of 4:18 last week at Liberty as a runner-up to Sean McGorty and his US #1 race of 4:11.