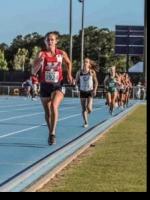 Elizabeth Mulford Reflects On XC Title, Looks Ahead Tow...
Elizabeth Mulford is the reigning 3A Cross Country Finals Champion and one of the top distance runners in the state. Dustin Fletcher caught up with her to talk the 2014 cross country season, her decis...

2014 All-Flrunners Girls XC Team...
From sub 18 minute performances to Florida's first ever female qualifier for Nike Cross Nationals, 2014 was a successful year for girls distance runners in the Sunshine State. It was a hard process bu...

3A State: Splendid Solos Yield to Deeper Teams...
Can we take a moment and acknowledge just how awesome Leon&#39;s Sukhi Khosla is? The Leon senior already set down a sub-15 minute and national top 10 time last week at regionals....

VOTE: Girls Performer Of The Week...
We had over 1,400 votes in our first Performer of the Week poll! Since it was so popular we wanted to continue it going throughout the postseason. We picked seven of the top girls performances during ...