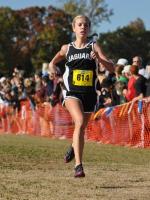 MileStat.com Elite Track Classic Preview...
It is quite the week to be a fan of Virginia high school track & field.  While many schools will make the trek up to Philadelphia for the Penn Relays, Sports Backers Stadium in Richmond will play hos...

Top 50 Fastest Girls XC Times in Virginia (FINAL Update...
A list of the top 50 fastest Virginia high school girls 5K times from this past cross country season. Many times on this list were achieved this past weekend at either the Foot Locker South Regional o...

Alcorta wins Foot Locker South with sub 17 clocking! 5 ...
A total of 6 Virginians qualified for the 2013 Foot Locker Nationals via top 10 finishes in the seeded race at the South Regional on Saturday in Charlotte, North Carolina.  West Springfield senior Ca...

4A Conference Championship Meet Coverage & Results...
Results and coverage from all of the 8 conference championship cross country meets in the VHSL Group 4A classification....

Group 4A Conference XC Virtual Meet Rankings...
Virtual meet cross country rankings for all 8 conferences (#17-24) in the Group 4A classification which generates team scoring based off season best 5K times in the database. Although they compete in ...