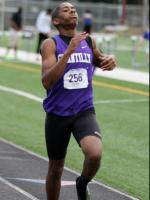 Chantilly Boys SMR National Record! 3:24.02!!...
This performance was the greatest sprint medley indoors ever and just adds to the list of amazing performances that VA has had thus far at New Balance Nationals....

KICK OF The Week: Son's Rundown Makes Dad Wanna Get Dow...
Watch Titus Jeffries anchor his 4x400 meter relay to remarkable come from behind win at the Virginia 6A State Meet, but more impressive was the dance moves that his dad threw down after his son's rund...

VHSL Group 6A State Auto-Qualifiers (1/21)...
Now that we have reached the final two huge weekends of in-season competition it is time to take a look at who are the current automatic qualifiers for states. Check them all out here....