The Grassfield and Western Branch boys waged war with one another for two days at Boo Williams Sportsplex for the 2013 Eastern Region indoor track & field team championship. At the conclusion of the meet, Grassfield came out the team champions with 84 points and Western Branch fell just short with 81 points in second place. It is almost certain that nothing is settled between these two teams and the rivalry will be renewed next weekend at the VHSL Group AAA State Championships as both teams should factor in the team title discussion along with top teams from the other three regions. 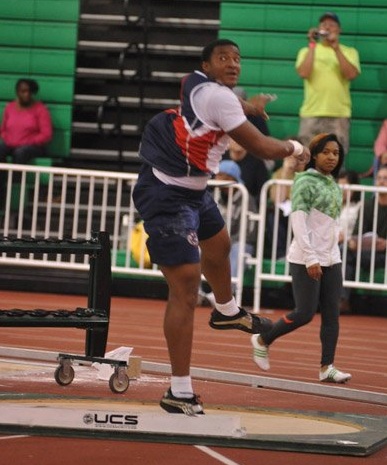 Grassfield senior Andrew Hines, the prohibitive favorite next weekend at the state meet in the shot put, returned back to top form after an off day at the district championships as he nearly eclipsed his personal best in the event with a first place mark by 2 1/12 feet at 57'0". Grassfield held Isaiah Harper out from jumping this weekend and freshmen Grant Holloway was only able to clear 6'3" for third place in the high jump, which their squad expects to score more than 6 points out of the jumps next weekend.

The high jump was one of the best competitions of the meet between Tallwood's Steven Dunbar and Oscar Smith's Bradley Jones. Both were able to successfully get over the bar cleanly at 6'9", but neither was able to clear at the next height. Earlier misses gave the US #2 ranked Dunbar the victory, while the Oscar Smith junior Jones settled for second and a new personal best clearance.

The relays were great battleground events between Western Branch and Grassfield. In the 4x800 meter relay on Friday, Western Branch challenged to break the 8 minute barrier with their winning time of 8:01.71, which will seed them fourth fastest at the AAA State Indoor Meet. Grassfield was four seconds back in second place at 8:05.63 and will look to score points with the same quartet and place among the top 8 in the state meet. Western Branch kept the momentum from their 4x800 meter relay victory into Saturday with the first race of the morning in the 4x200 meter relay. Western Branch's Byron Robinson was able to run down Oscar Smith on anchor leg, who had built a lead from an earlier leg by Michael Cherry, with a season best and VA #4 time of 1:31.02 to win the regional 4x200. Grassfield did not run a 4x200, but are state qualified with a VA #3 time of 1:30.96.

Both teams were featured in the 4x400 meter relay to end the meet and the regional team title on the line. Grassfield went into the final event of the meet with a two point lead on Western Branch, so Western Branch needed to finish among at least one place ahead of them and among the top four. With their top quarter miler Byron Robinson done for the day after running the 55 meter dash, 4x200, and 500, the rest of his 4x400 meter squad did an admirable job in his absence to post a time of 3:28.08. However, three seconds ahead of them and winning the 4x400 meter relay event was the one school that they had to beat in the race in Grassfield (3:25.66).Grassfield's time ranks them second fastest in the state of Virginia, behind only Western Branch who earlier in the season with a relay featuring Byron Robinson on it, clocked a swift 3:24.53. If Robinson had ran either the 300 meter dash or 4x400 meter relay instead of the 55 meter dash which he finished 8th in the finals and did not score a point (region only scores through 6 places), Western Branch would have likely won the team title. The margin of error is incredible narrow between these two deep and talented squads. 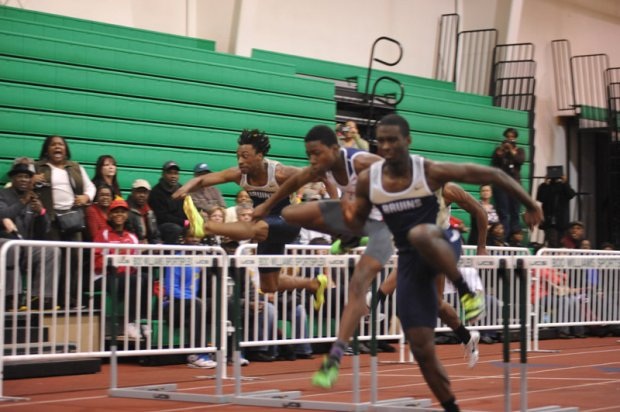 The 55 meter hurdles finals also saw a Grassfield versus Western Branch matchup between Western Branch senior Aaron Simpson and Grassfield freshmen Grant Holloway. Holloway is the state leader and national leader in the event with a 7.35 season best, which is also a US high school freshmen national record. However, the fastest time in the country has not intimidated Western Branch's Simpson too much as he has now beaten Holloway in three meets this season including for the Eastern Region title with a US #3 personal best clocking of 7.37 in the finals on Friday. Holloway was third in the finals at 7.49 as Charles Graham of Phoebus also bested him in second place at 7.46. Holloway can certainly erase the last three defeats to Simpson with a state championship next Saturday. 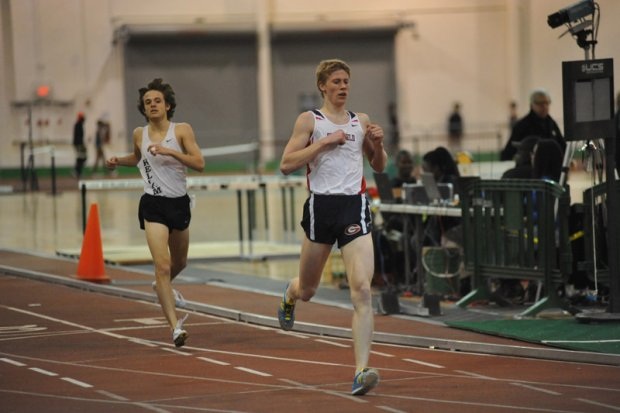 Grassfield and Western Branch each had a distance runner pick up a first place and individual title. In the 1000 meter run, Alex Midkiff for Grassfield grinded out for 5 laps with Kellam's Billy Boros who earlier won the 1600 by five seconds in 4:21.24. Boros doubled back well to run a new 1000 meter personal best in 2:32.58, but a fresher Midkiff had more in the tank to win in a near 5 second personal best of 2:31.83. Midkiff previously did not factor in Grassfield's projected state meet scoring, but his VA #4 2:31 run in the 1000 makes him someone to account for. Western Branch is hoping the same for Nick Richardson at the state meet and that he can break into the top 8 next weekend. Richardson looked fit and capable of doing that in his regional race as he was able to kick strong to pull away from Southeastern District rival Micah Ellington (2nd, 9:43) and run just two seconds off his season best in a 9:36.85 victory. 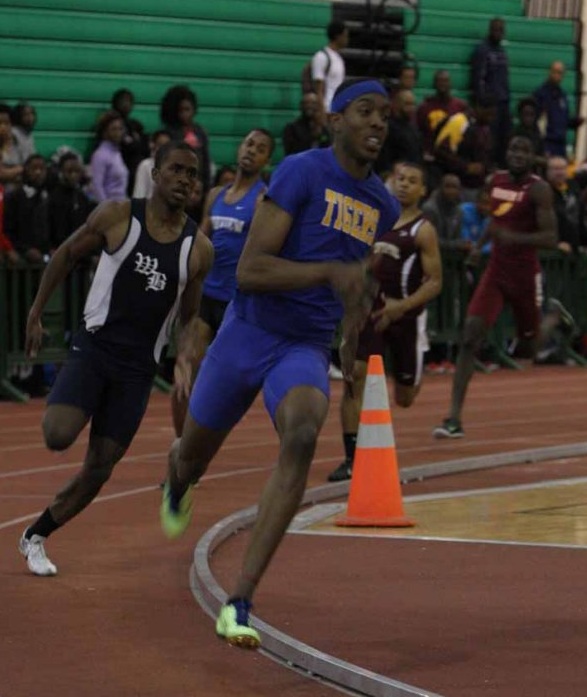 The 500 meter dash saw the first encounter of the season between two of the state's best quarter milers in Florida State bound Michael Cherry of Oscar Smith and Penn State bound Byron Robinson of Western Branch. Cherry was coming off his state record 1:02.61 500 last week at the district, so a match-up with arguably the next best 500 runner in the state in Robinson might push him to lower his own state record and US #4 all-time performance. With both coming off 4x200 meter relay races earlier, Cherry was not able to lower his time, but there was a great race nonetheless between the two with Cherry establishing a new meet record at 1:03.39 and Robinson running a new PR and the nation's third fastest time as runner-up at 1:04.37.

With neither Cherry nor Robinson in the 300 meter dash later in the meet, it opened the door for the region's other top sprinters to become a regional champion. Warwick junior Ian Barrett welcomed that opportunity and was able to pull away down the stretch from the others in the fast section for a personal best victory of 35.35, while Bayside's Xavier King Jr. grabbed second place from a slower section with his 35.49 performance.

In the 55 meter dash finals, Grassfield's Vincent Lowe matched the US #8 6.37 clocking posted by Mustaqeem Williams of Forest Park at the Northwest Region Championships this past week to share the state leading indoor time in the event with the defending state champ Williams. Kempsville's Devontay Doyle, who has been one of the region's best jumpers in the long and triple jump this season, proved himself on the track as well as dropped his time from 6.48 prior to the regional meet to a US #10 6.40 runner-up clocking in the Eastern Region finals of the 55 meter dash. 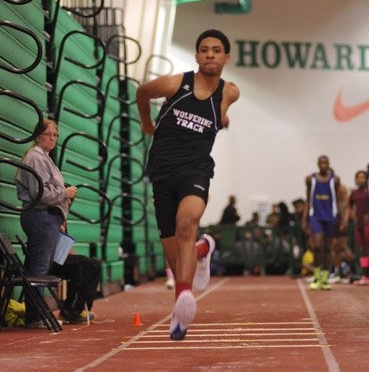 Doyle was a close runner-up as well in the long jump as his best jump of the day at 22'6.25" put him a mere one inch behind Beach District rival Rafael Moore of Tallwod, who joined teammate Steven Dunbar this weekend as a regional champion with his field best mark of 22'7.25". The margin between Woodside's Aaron Worrell and the second place finisher in the triple jump was nowhere near as close as the top two in the long jump as the recent University of Virginia signee Worrell was nearly three feet further than runner-up Trevon Byron (45'6") of Landstown with Worrell's mark of 48'4". Worrell is currently ranked US #9 indoors in the event.