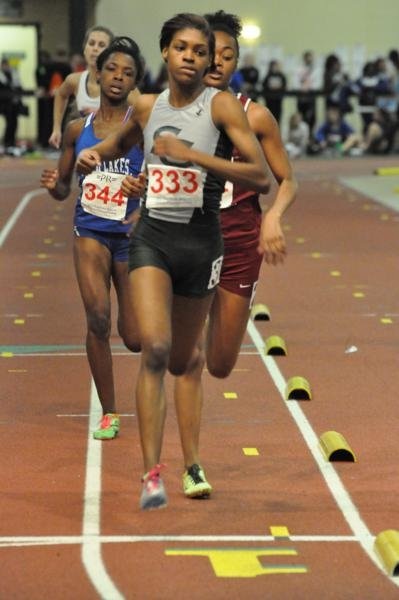 Felecia Majors may go down as the greatest all-around track athlete in the history of the Northern Region. There will at least be no athlete after her to challenge for that distinction with this being the last year of the region's existence. In the last Northern Region Indoor Track & Field championships before the current regional system disolves in the new 6 classification system next fall, the South County senior and University of Tennessee recruit Majors totaled 64 points individually in the one day meet held this past Saturday at George Mason University in Fairfax County.

In order for South County to overtake Lake Braddock, one of the team favorites for next weekend's Group AAA State Indoor Championships in Hampton, they need more from the rest of their team and not rely only on Majors. The Lady Stallions got that in a total of 50 additional points from other athletes and relays on their squad for their overall team score of 116 to become the regional team champions. Morgan Knight cleared 10'9" for third in the pole vault and placed second in the 55 meter hurdles finals (8.66). The 55 meter dash was loaded with South County athletes as they took three of the top five places in the finals with Majors (2nd, 7.17), Kierra Rountree (3rd, 7.31), and Brittany Kendall (5th, 7.39)

The Lake Braddock girls got the vast majority of their points through their trio of distance running superstars in Sophie Chase, Katie Roche, and Hannah Christen. Each runner earned a regional individual title in a distance race. Sophie Chase, who spent the weekend finishing up her swimming season for Lake Braddock as well, established a new meet record in the 1600 meter run with a 4:51.30 performance leading wire to wire over James Robinson's Macey Schweikert, who also ran under 5 minutes in a new personal best of 4:51.30. In the 1000 meter run, West Springfield junior Caroline Alcorta attempted to run away from Chase and junior teammate Katie Roche in setting a brisk early pace, but Roche changed gears quickly in the final lap to post a new school record time of 2:53.70 and take first away from Alcorta who finished with a new PR of 2:55.49 for second place.

The 3200 meter run featured two runners who could be contending for the 6A state cross country title next fall (along with returning Foot Locker finalist Alcorta) between Lake Braddock junior Christen and Oakton sophomore Allie Klimkiewicz. After the first mile pacing work was done mainly by Robert E. Lee's Bailey Kolonich (3rd, 10:59.01), Christen and Klimkiewicz broke away before the returning indoor All-American two miler Christen was able to make a move to keep the lead for good in the final 800 meters for a season best performance of 10:37, which is the fastest indoors in Virginia this season. The Foot Locker finalist Klimkiewicz settled for second in a 10:45 season best. 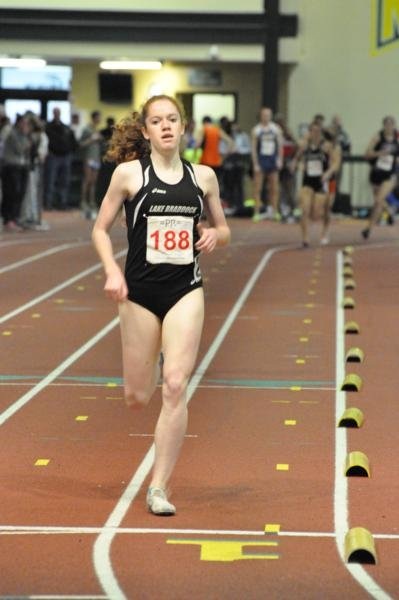 While Lake Braddock was a distant runner-up to South County at the regional meet, Lake Braddock is a team well positioned to compete for the state title next weekend. Despite not loading their 4x800 meter relay with Chase, Lake Braddock won the relay event in a time of 9:29 with Roche and Christen featured on the relay. In a two-day meet for the state championships, Lake Braddock will have no hesitation putting their "A" team on the track in the 4x800 with all their runners able to get a night's rest before competing in their individual events on Saturday. Rachel Fasana in the pole vault could play a huge role in their team's outcome after clearing 11 feet for the second meet in a row and will be ranked fourth in the event at the state meet.

Beyond Majors, the only other athlete in the girls' meet to win more than one individual event was Oakton senior Meghan Jean-Baptiste, who was able to beat Majors in the high jump with a successful clearance of 5'4". Later in the meet after posting the top time in the prelims at 8.45, Jean-Baptiste achieved a new personal best in the 55 meter hurdles with a 8.34 victory in the finals. With a strong race in the state meet prelims, Jean-Baptiste is capable of making the fastest finals section of six at Boo Williams next weekend.

Another athlete to hand Majors a second place finish and keep her from adding to her hoard of regional titles was Thomas Edison senior Anna Williams. Currently nationally ranked 5th in the country and leading the state of Virginia with her 40'3" performance from Virginia Tech, Williams nearly went over 40 feet again at George Mason with a leap of 39'6.50". Williams also excels in the other horizontal jumping event of the long jump as the Columbia University recruit was a regional runner-up to Majors with a mark of 18'6".

Not too many girls have ran under 7.20 F.A.T. this season in Virginia in the 55 meter dash, but two Northern Region sprinters were able to dip under the time just in time for the state meeet between Hayfield's Kerisha Goode (7.14) and South County's Felecia Majors (7.17). Majors may not run the event at the state meet and instead run on a relay for her third maximum running event along with the 500 and 300, but one can expect Goode on the starting line and attempting to challenge the speed and talent found in the Eastern Region after her personal best regional victory.

More speed will be coming down to the Tidewater area next weekend from Fairfax County courtesy of the South Lakes 4x200 and 4x400 meter relays, which won both races impressively at the regional meet in times of 1:46.71 and 4:00.54 respectively. Their relays include a 1:16 500 meter runner in Kyanna Calhoun as well as the 300 meter regional runner-up in Delaney Wickman. Finishing third in the 300 behind Majors and Wickman was Mount Vernon's Jasmine Hill, who made Majors work hard for the 500 regional title earlier in the meet as she was on her heels in second place with a new PR time of 1:15.89. 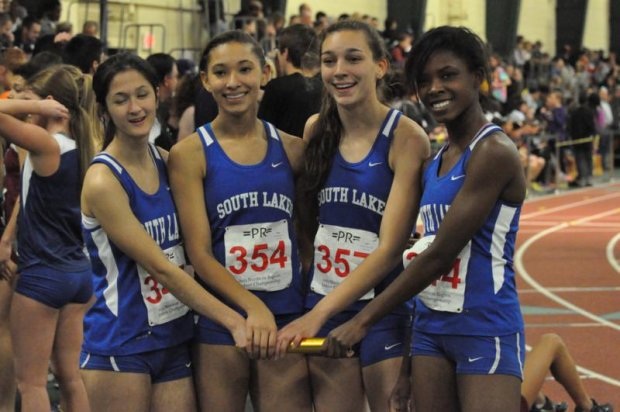