High school 300 meter national record holder Michael Cherry nearly pulled off the double to win both the 400 and 200 national titles, but came up just short in getting the second title. Cherry first took care of business in the 400, which he came in as the favorite and top seed after a strong preliminary performance yesterday. He may have held back in the first 200 meters from trying to go all out for the fastest time possible since the 200 meter dash finals were to scheduled to be run less than 45 minutes later, but Cherry still had a tough race on his hands from the other competitors in the finals. Laray Smith of New York matched Cherry in getting to the break point at the same time and pressed forward to lead going into 200 meters. Cherry had to swing out wide on the backstretch of the final lap to make his move for the win and pass Smith. 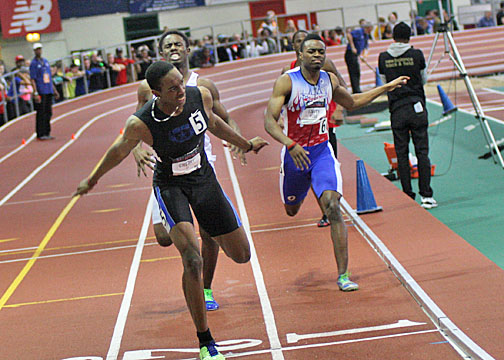 Once Cherry regained the lead going into the final turn, he powered down the homestretch for a 46.87 victory, which was just a hundredth of a second faster than his junior national class record race at the 2012 New Balance Indoor Nationals. Back on the track for the 200 meter dash finals in the same hour, Cherry in the middle of the track and Florida's Ceolamar Ways on the far outside lane ran virtually even from start to finish, but Cherry was never able to fully make up the stagger on Ways who won in a time of 21.37 and the Oscar Smith senior Cherry had to settle as national runner-up in the 200 at 21.43, which is a new personal best (both indoors or outdoors) for one of Virginia's all-time greats in the sprints.

One of the biggest surprises by the Virginians was Westfield's Nathan Kiley winning the national title in the 800 meter run. Kiley had a previous personal best time of 1:53.24 and was the state runner-up in the 1000 meter run. An All-American top 6 finish seemed to certainly be a feasible goal for Kiley to accomplish, but he was not considered to be one of the pre-race favorites to the win the whole thing. Running in section 2 of 3, Kiley set the time to beat for the fast section by running nearly a full two second PR with an incredible race at 1:51.37. 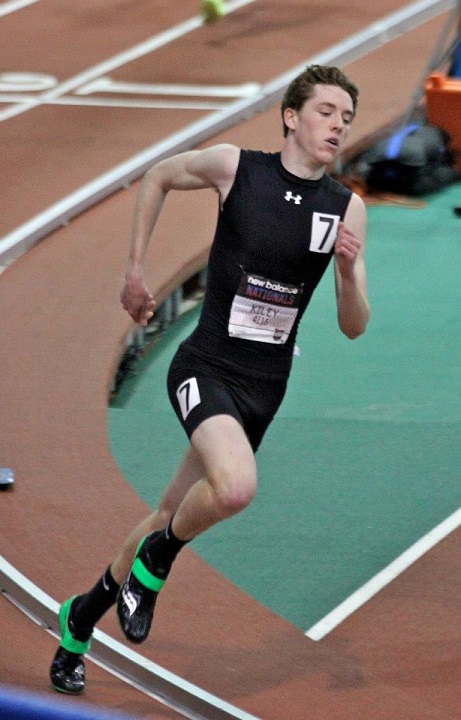 Kiley lead his section through 400 meters right at 54 seconds flat before James Buser of New Jersey seized the lead from him with an aggressive move. Kiley was pulled along to an honest third 200 by Buser before making the move to pass the fading New Jersey state champ on the backstretch with just over 100 meters to go en route to his breakthrough time at 1:51. Kiley put up the time to beat and tough challenge for the fast section runners and they could not beat it as Chris Ibarra of Texas was just a few fractions slower in winning the fast section in 1:51.40 to the joy of the spectating Kiley giving him the national title. 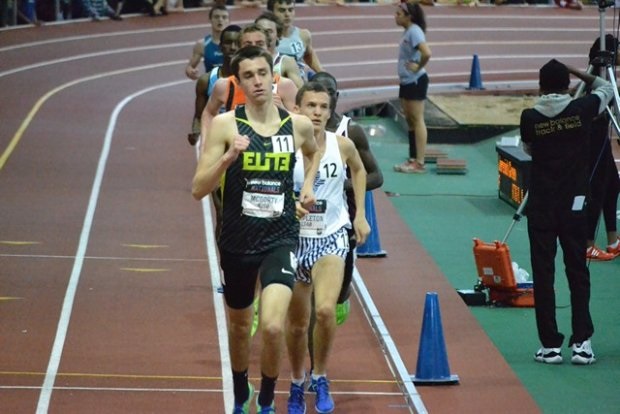 Sean McGorty had to settle for national runner-up once again to the Kenyan native Edward Cheserek of New Jersey. The Chantilly senior McGorty battled and challenged Cheserek for the Foot Locker Nationals title in San Diego back in December. McGorty, one of Virginia's most accomplished distance runners ever, once again fell just short in taking down Cheserek for his first national title as the 8:39 national record holder Cheserek was able to run away from McGorty and the rest of the nation's best in a winning time of 8:59 flat. McGorty was actually racing in a chase pack of four with one lap to go and was able to outkick them all with a 31 second last lap for national runner-up honors in a final time of 9:02.02. Earlier this season, McGorty ran a VA #5 all-time 3200 time of 8:55 in his district meet. His time at the Armory converts down to another sub 9 minute 3200 for the Stanford-bound distance runner. Running an exceptional race from the slow section and nearly sneaking into the top 6 was Lake Braddock senior Nick Tuck. Tuck established a new Lake Braddock school record in the two mile by running a six second PR time of 9:11.70 to finish second in his section and 8th fastest overall combining the two sections of the championship boys' two mile.

Featured in the seeded section of the girls two mile were three of the Northern Region's elite in West Springfield junior Caroline Alcorta, Oakton sophomore Allie Klimkiewicz, and Lake Braddock junior Hannah Christen. Christen was a returning All-American indoors in the two mile, while Foot Locker finalists Alcorta and Klimkiewicz were coming off personal best races at the state meet with Alcorta securing her first individual state title. Both Alcorta and Klimkiewicz continued to lower their times on Sunday at the Armory as Alcorta ran the fourth fastest time ever in Virginia high school history with an All-American fourth place finish of 10:23.77. The Oakton tenth grader Klimkiewiz was not far off an All-American medal herself in 8th place with her stellar time of 10:32.35, which ranks 7th fastest all-time in state indoor history.

The Woodbridge girls posted the second fastest time in state indoor history for the 4x400 meter relay with their All-American third place effort at 3:47.94. Their relay closed strong in the race with 55 and 54 second splits for their final two legs with Farrah Suber and Jewel Christian. The fastest split in the 4x400 races among the Virginian squads belonged to a smoking 53.80 anchor leg from Felecia Majors to help her team finish 8th in the national meet with an overall time of 3:53.67.

Both Westfield and Western Branch pushed each other hard enough in a slower section of the boys 4x400 to propel both into the top 6 overall for All-American honors as 800 meter national champ Kiley anchored Westfield to a final time of 3:19.69 to place fifth overall, while Western Branch led off with their best two legs in Byron Robinson and Corey Jones to help them run a swift season best time of 3:21.61 to finish sixth overall for All-American honors.

A young Nansemond River girls 4x200 squad earned All-American honors by simply getting around the track and passing the batons cleanly in the six-team finals. Their finals race was not as strong as their preliminary run of 1:40 as they finished last with a time of 1:43, but still earned All-American honors with their sixth place finish and will graduate only one leg from this year's group.

Two future UVA teammates can report to their future college coaches as All-Americans now with Woodside's Aaron Worrell and Manchester's Christian Rogers producing marks far enough to insert them inside the top 6 at the New Balance Nationals in the triple jump. The recent Group AAA state champion Worrell moved into third place with his third jump at 49'5.75". His position never changed with himself and the top two performers as the only competitors who went over 49 feet. The Central Region champion Rogers also got his best mark early in with his second legal mark 48'1.75" to place him fifth for an All-American medal.

Ranked fifth in the nation coming into the New Balance Indoor Nationals, Thomas Edison senior Anna Williams moved up the national leaderboard this weekend as well as the state all-time performance list with a third place All-American leap of 40'9.50" in the girls' triple jump. The Armory and New York City will become familiar grounds for Williams next year when she attends Columbia University.

Leah Lott of Landstown and Chantel Ray of Hampton probably are looking forward to a break from each other. The two battled for the Group AAA state title two weeks ago in the 55 meter hurdles with Lott winning in a VA #4 all-time clocking of 7.84. At the indoor nationals, Lott and Ray raced two more times in the preliminary first round on Saturday and together again Sunday afternoon for the national 60 meter hurdles finals. The Hampton junior Ray got the better of the Landstown senior Lott in Saturday's prelims, but Lott came out on top in the finals with both Virginians earning All-American honors with Lott at 8.56 for fourth place and Ray at 8.64 for fifth place.

Another pair of All-Americans from Virginia were found in the 60 meter dash with Forest Park's Mustaqeem Williams and James Robinson's Ayo Raymond. Not every year that Virginia's fastest are found outside of the Eastern Region and Tidewater area, but two-time Group AAA state 55 meter dash champ Williams (3rd, 6.75) and Northern Region 55 meter dash champ Raymond (6th, 6.87) proved in advancing to and earning All-American honors in the New Balance Nationals 60 meter dash finals that speed is also found elsewhere in the state of Virginia.

Phoebus sophomore Charles Graham has a bright future ahead of him and his future looks even brighter with promise after becoming an All-American in the 60 meter hurdles. Both Graham and Eastern Region champ Aaron Simpson of Western Branch were able to advance onto the semi-finals, which then Graham became the only Virginian to move onto the finals as the last and 8th qualifier in a 8.02 prelim performance. Graham only needed to pick off two more hurdlers in the finals to become an All-American, which he accomplished in his sixth place time of 8.00 as he went through 55 meters in a 7.43 personal best.

Phoebus sophomore Carolyn Brown just missed making the finals last year as a freshmen in the 60 meter dash at indoor nationals. She went the next step this year as her 7.63 clocking in the semi-finals on Sunday squeaked her into the finals as the 8th and last finals qualifier. In the finals, Brown was able to lower her time down to 7.60, but unable to catch two other finalists in order to get on the podium for All-American honors as she finished last in the finals. Brown's next stop and goal for her next national meet will certainly be to not only make the finals, but earn her first high school All-American honor.

Cave Spring junior Katie Fortner was attempting to be an All-American for a second straight year in the mile after running one of the fastest mile times ever in state indoor history at last year's New Balance Indoor Nationals in 4:49. Only a second ended up separating a pack of runners for places fourth through seventh, but Fortner unfortunately was on the tail end of that pack finishing in 7th place with a season best time of 4:53.52 and just miss the All-American podium.

In the girls 800 meter run, there were no All-Americans from the state, but several ran personal bests led by Group AAA 1000 meter state champ Katie Roche of Lake Braddock. Roche finished 11th overall with a time of 2:12.44. Roche has ran the 300 meter hurdles as her main event in past outdoor seasons, but may see her running the 800 more often as her primary race with her recent success this winter in the mid-distance races. Liberty Christian Academy's Micah Brickhill won the first section of the girls 800 in a time of 2:15.39, which earned a 20th overall place for the UVA recruit Brickhill.

Midlothian's Randy Hahn probably should have been placed in the fast section of the freshmen mile. Hahn had to do all of the pace work and race the clock from the slow section, which he won in a PR effort of 4:26.64. The time held up for third place overall after the fast section was completed with the winner at 4:22 and second place at 4:23. Hahn had also won the slow section of the Group AAA State Meet 3200 meter run two Saturdays ago in Hampton with a time of 9:38.94.

Emma Call of Maggie Walker finished 9th in the freshmen girls mile race at the indoor nationals with a personal best time of 5:12.42. Two weeks ago, Call earned All-State honors in the 1000 meter run with a PR run of 3:00 and appears to be the next star distance runner for long-time coach Jim Holdren.