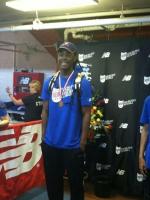 Central Region's Top Returnees for 2013 Outdoor Season...
A list of the top returning individuals in each event among Central Region schools from last year&#39;s outdoor season and links to full returnees rankings lists in each event. Patrick Hen...

Virginians @ New Balance Indoor Nationals (Day 3 Highli...
Oscar Smith&#39;s Michael Cherry in the 400 and Westfield&#39;s Nathan Kiley in the 800 winning national titles lead as the top performances by Virginians on the final day of the 2013 New Balance Nati...

2013 VHSL Group AAA State Indoor Meet Preview - Boys Tr...
Since his arrival from Texas at the start of his junior year, Woodside&#39;s Aaron Worrell has continued to rise up the charts as one of the state&#39;s best in the triple jump. In his first track sea...