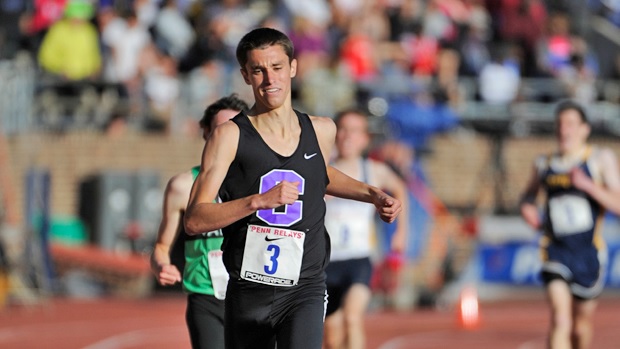 Penn Relays has a lot of history. For any athlete to break any meet record at the 119th annual event is quite a few considering how many great athletes converge on Franklin Field every April. Chantilly senior Sean McGorty etched himself in the meet record books with a race performance of epicness. Leading wire to wire and closing with a 59.5 last quarter, McGorty ran a new national leading time and broke the high school mile race record at Penn with a 4:04.57 victory against a top caliber field. McGorty's mile time is the third fastest mile in state history behind only high school mile record holder Alan Webb (3:53.43) and Sharif Karie (4:02.01). Some great company there for McGorty.

Also joining McGorty high up on the all-time list of past great milers from Virginia and breaking the old Penn Relays high school mile record in third place was Loudoun County senior Patrick Joseph. The Virginia Tech recruit Joseph was coming off an impressive 1:52 solo 800 in windy conditions last weekend to prep him for his big race at Penn Relays. Joseph battled with the other runners giving chase after McGorty. Joseph finished strong to place 3rd in a US #4 time of 4:07.58. The state of Virginia has not had two milers as a fast as both McGorty and Joseph since Alan Webb and Bobby Lockhart a dozen years ago.

The Woodbridge girls may have had a tough time keeping up with the Jamaicans in the Championships of America finals as they finished 6th overall, but they were pulled along to one of the fastest times ever in state history with a 3:44.41 to become VA #6 all-time in the event outdoors. Their relay squad included the same quartet which ran the VA #2 all-time 4x400 meter relay performance this past indoor season with Kady Badham, Olivia Coopwood, Jewel Christian, and Farrah Suber. Suber ran two 53 second split legs for the Woodbridge girls this weekend in the qualifying heat and finals including a 53.5 split to bring them from 8th place to 6th on anchor leg in the Championships of America finals.

The Lake Braddock girls ended up finishing 8th in the Championships of America finals in the 4x800 meter relay after leading through the first two legs with Katie Roche (2:13) and Sophie Chase (2:14), but started to fall back after a dropped baton on the backstretch on their third leg and yet still managed to run a faster time than their qualifying heat performance in a state best 9:13.54 clocking. The bad luck with the baton drop was unfortunate, but at least their squad knows that a sub 9:10 is a strong potential and chasing after the state record (9:03.35 by 2010 West Springfield squad). Two of their legs in Sophie Chase and Hannah Christen had raced a combined 7,600 meters between their 4x800 heat and 3K races prior to Friday's 4x800 finals.

The Forest Park boys rolled at a super sonic speed level in the 4x100 meter relay qualifying heats with a 41.15 to rank them second heading into the Championships of America finals and fastest among all American squads. While the state record of 40.56 by T.C. Williams in 1993 is still far off, Forest Park's time is the second fastest all-time in state history to move ahead of Deep Creek's 41.19 clocking in the 2003 Penn Relays. Western Branch made the large school finals of the boys 4x100 with a 42.78 clocking in the preliminary round.

The Westfield boys also find themselves in the Championships of America finals with two other Virginia schools in Western Branch and West Springfield with one of the fastest performances in the qualifying heats at 7:47. With the return of indoor national 800 meter champ Nathan Kiley from an early outdoor season hamstring injury, last year's Championships of America champions at Penn Relays are close to full strength to try and defend their title in Saturday's finals.

There were no Virginia relays in the Championships of America finals for the girls 4x100, but there were three teams in the large school and small school division finals which allows those relays who just missed the cut for the CofA another race to improve their times from prelims in the day before. In the small school race, the state leaders from King's Fork stayed the state leaders as they got the sticks around cleanly for a swift 47.46 clocking to take third in the finals. Meanwhile, their Southeasten District competition at Western Branch (8th, 48.35) as well as the South County girls (7th, 48.03) raced in the large school finals on Friday afternoon.

The Blacksburg boys ran one of the fastest DMRs ever in state history with their 7th place finish of 10:11.58 in a stacked distance medley field at Penn Relays. Matthew Borny (3:07.9), Kenneth Hagan (49.6), Michael Carter (1:57.2), and Nick Link (4:16.9) were their legs and splits for a quartet which is making the late night drive down to Richmond tomorrow for all to compete individually at the MileStat.com Elite Track Classic.

James Williams may have been Radford High School's first athlete represented and competing at the Penn Relays in quite some time as he represented his Group A school and small schools everywhere in Virginia with new personal best throw of 172 feet in the discus to place 10th at the Penn Relays. Williams has been undefeated in all meets this outdoor season prior to Penn Relays, but getting the chance to face greater competition helped elevate him to an even great performance. The Radford junior is seeking his first state title this spring after finishing second in the discus at last spring's Group A State Championships. He will still have the defending champion Nik Huffman of Virginia High School to deal with, but at least has joined him in the 170 plus foot territory in the event.

In the 3000 meter run, Louis Colson of Thomas Edison and Nick Tuck of Lake Braddock found themselves finishing close to one another like seen in many past races in Northern Virginia. The Group AAA state indoor 3200 champ Colson placed 10th in a deep race with a time of 8:31.62, while regional rival Tuck was just on his heels in 12th place at 8:32.24. Both of their times convert to just under 9:10 for 3200 meters.

More extensive coverage to come on McGorty's race as well as other Virginians performances on Friday and Saturday following the completion of hosting the MileStat.com Track Classic this weekend. Check out our national team's coverage on the Penn Relays as well on MileSplit US and the Penn Relays meet page on MileSplit.