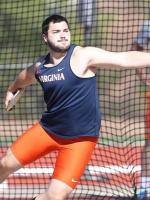 MileStat.com's Boys All-State Team...
Now that the MileStat individual athlete awards have been released it is now time to release the MileStat All-State Teams. These include first, second, and third team all-state selections with each at...

MileStat.com Elite Top 50 Boys Outdoor T&F Rankings (6/...
With States only hours away it is time to get one good look at the leaderboards and event by event rankings before they are completely rewritten. With six state meets, each and every leaderboard shoul...

Zajac State Record 203-9 Discus! Complete Performance a...
Missed any of the action this week? Well here is MileStat&#39;s condensed version of all the top performances and all the coverage attached to meets in our entire system this week. ...

Penn Relays Accepted Entries (VA)...
With only weeks to go the office of The Penn Relays Carnival officially announced the accepted entries for the individual events to be held the last weekend in April, 2014. ...

2014 Outdoor Track Preview (Throws & Pole Vault)...
Preview of the best throwers and vaulters in the state including all throws and the pole vault, all classifications, and both boys and girls.   ...