Girls at the Gala didn't come to play... They came to throw down! 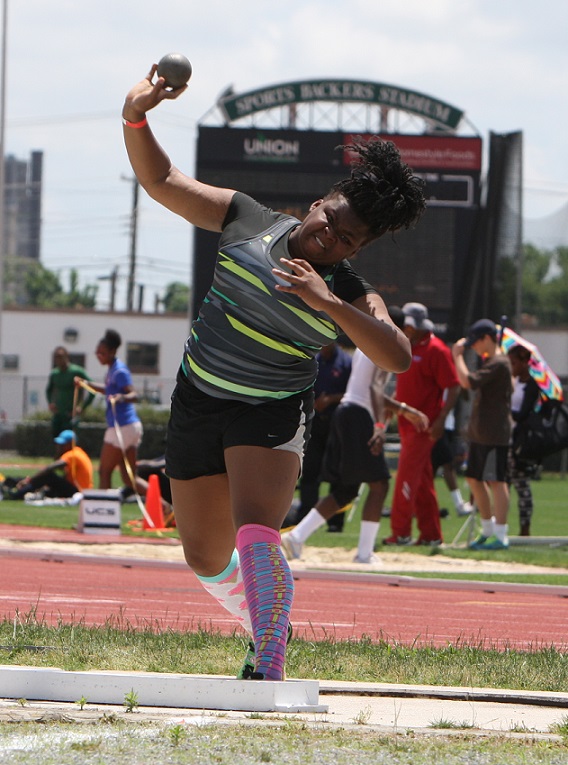 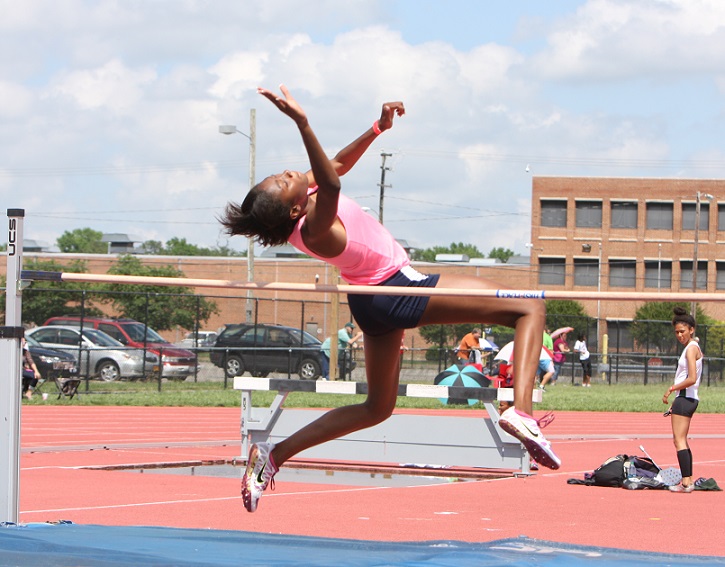 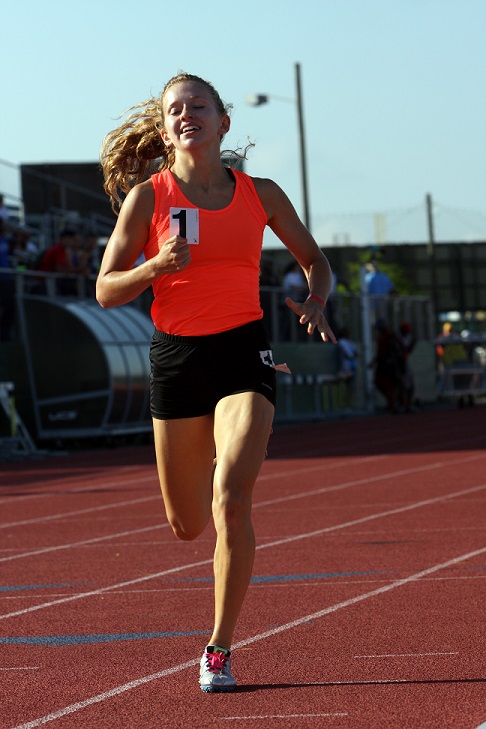 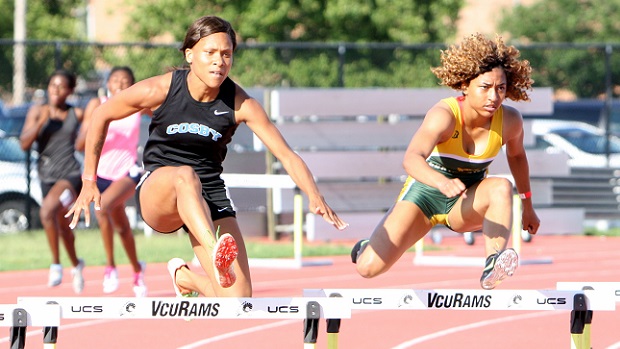 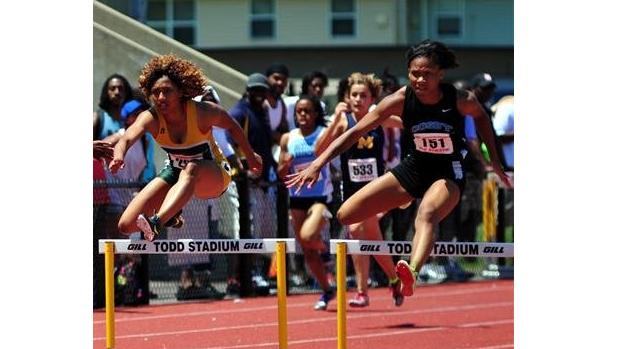 Could we see a sub 60 second race in the girls 400 meter hurdles at the MIleStat.com Elite Track Gala? It should be a great battle to make a push for a fast time between the Smith's in two-time Group AAA state champion Heather Smith of Great Bridge and De'Nisha Smith of Cosby. At last weekend's state finals in the 300 meter hurdles, the top seeded De'Nisha Smith (42.95 season best) held the lead going in the final set of hurdles before clipping her last hurdle and crashing to the track and finishing 3rd. Heather Smith won in a season best time of 42.79.

Several meet records could be in jeopardy in this year's Gala, which is the 7th annual edition of the event after taking a one year hiatus in 2012 following a storm shortened meet in 2011. We expect the meet to grow in future years and become as well as promote it as an unofficial "Meet of Champions" in Virginia as the new 6 classification state championship system to go into effect in the 2013-2014 school year should cause a greater desire for the state's best athletes and coaches to gather together to compete at season's end after the talent being spread out in the 6 state championshsip meets.

The girls 400 meter hurdles is clearly one of them with two 42 second 300 meter hurdles in Heather Smith and De'Nisha Smith. Two private school state champion runners in Micah Brickhill of Liberty Christian and Molly Breidenbaugh of Trinity both enter with personal bests faster than the meet records in their respective events with Brickhill as the top seed in the 800 meter run at a 2:12.38 best, while Breidenbaugh has run sub 18 minutes for 5K in cross country and should be fit to do the same on a track.

A sub 4 minute time for the metric mile could be possible in the boys 1500 with a field including private school state champion Nick Wiggins of Norfolk Academy and Group AA state 1600 meter runner-up Dawson Connell of York. The girls 1500 should see a winning time close to the equivalent of a 5 minute mile between home school distance Megan Lockett from Maryland, Allyson Bodmer of Forest Park, Morgan Lewis of Veritas, and Annie Taylor of Western Albemarle. Lewis is a remarkable young talent as an 8th grader having already run 10:59 for 3200 meters and 5:07 for the mile this spring.

Kiera Brown of Great Bridge will see if she can go even further under 12 seconds in the 100 meter dash after the senior won the Group AAA state title last week at Todd Stadium in a swift 11.82 personal best clocking. DeMatha Catholic (MD) sophomore Daryl Haraway is one of the quickest underclassmen nationally in the sprints as he brings in season best times of 10.49 in the 100 meter dash and 21.57 in the 200 meter dash to make him the odds-on favorite and top seed in both races at the Gala.

Last time that Stone Bridge junior D'Ante Yarborough competed at Sports Backers Stadium in early May at the Southern Track Classic, he got a favorable tailwind to run a personal best performance of 14.07 in the 110 meter hurdles. Yarborough is looking for the winds to be generous and in his favor again to lower his PB after finishing as a state runner-up in the Group AAA finals last Saturday. Yarborough will also double back in the 400 meter hurdles at the Gala which should see a tightly contested finish in the fast section with 5 hurdlers seeded around 54 seconds based on conversions from the 300 meter hurdles times (38-39 second range).

All of the throwing events appear to have solid depth and state champion or All-State caliber athletes leading their fields. Broadwater Academy's Preston Richardson will attempt to sweep the boys' throws as he is one of the state's best in the discus after winning the private school state title last month at the VISAA State Championships in the shot put and discus with personal best marks of 167'10" in the discus and 49'8.75" in the shot put.

Another junior thrower in Patrick Henry's Shania Williams, headlines the girls' throwing events as the recently crowned Group AAA state champion in the shot put. Williams will be joined in the shot put circle by another 40 plus foot thrower in Nansemond River sophomore Zakiya Rashid, who is the top entrant in the discus throw as the Eastern Region champ has a personal best mark of 134'10". Central Region champion Denise O'Rourke also has a season best over 130 feet in the discus, while Gar-Field's Naihla Rose-Delia is solid across the board in both the shot put and discus as the Northwest Region runner-up in both events.

The Southern Track Classic champions from a month ago in the girls' horizontal jumps are back again leaping at Sports Backers Stadium between Armstrong's Ashley Fleming (18'11.25" PR) in the long jump and Henrico's LaChyna Roe (40'1") in the triple jump. Fleming was a surprise winner at the Southern Track Classic and is looking to bounce back from a disappointing 20th place state meet finish last week. Roe is also look for a redemption meet after ranking #2 in the state of Virginia with one of the best marks ever by a sophomore at 40'1" from the Dogwood Track Classic and then eventually finishing 7th at the Group AAA State Meet with a mark of 37'9.50".

The boys' high jump will have two competitors who have cleared a height of at least 6'7" this season between Central Region champion Will Kendall of Midlothian and Cameron Holdren of Liberty Christian. Meanwhile, the girls' high jump record shared by several athletes at 5'6" should go down in all likelihood with two-time Group AAA state outdoor high jump champ Crystal Jones of Colonial Forge. Jones is the state leader in the event with a season best clearance of 5'8.50".

Stafford's Ashley Hinton of Stafford cleared a new personal best height of 11'3" for fourth place in the pole vault at the Group AAA State Meet and this week at the Gala will get a chance to beat that height competing against another vaulter with a personal best at 11'3" in the private state champ Jessie Glynn of Liberty Christian.

Look for the Strehler twins of Trinity Episcopal to work together for 12.5 laps in the boys 5K to conclude the Gala like they did in the VISAA State 3200 last month when they went 1-2 in the event with times of 9:42 with Mac Strehler as the winner and Reider Strehler as the runner-up. Two familiar faces with each other in races in Bay Rivers District middle distance runners Derek Holdsworth of Lafayette and Austin Savage of New Kent will see each other again the 800 meter dash. Both have personal bests of 1:54 in the open 800. Holdsworth was the state runner-up to Patrick Joseph at the Group AA State Meet, while Savage ran anchor leg on New Kent's state champion 4x800 meter relay. 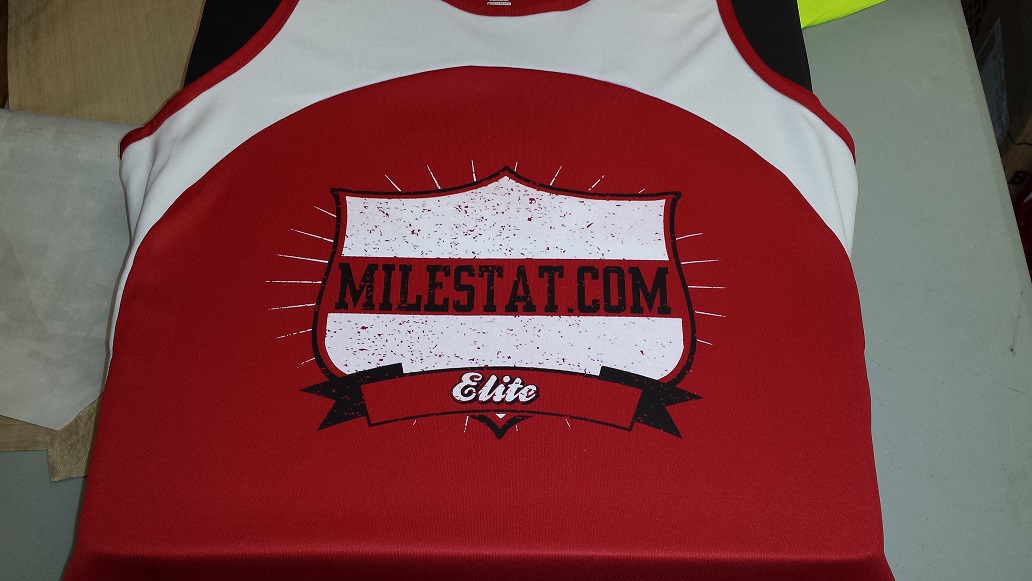 Pictured above is the MileStat.com Elite singlets which a good portion of athletes purchased for this weekend's Gala with the $30 entry fee. There may be some extras available for purchase on meet day ($20) for those who didn't purchase in advance and definitely will be selling these in the future seasons as well for athletes to wear.