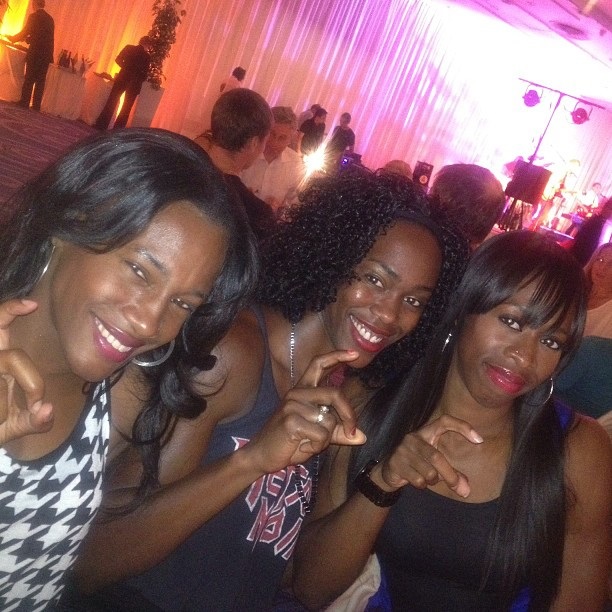 Hampton University alum and former Virginia high school track stars Kellie Wells, Yvette Lewis, & Francena McCorory at a post-event gathering following competition in IAAF Diamond League Monaco meet with plenty of reason to celebrate after great performances across the board for the Virginians on the international stage.

Virginia hurdlers dominated the women's 100 meter hurdles event at the IAAF Diamond League circuit track & field meet in Monaco with a 1-2-3 finish from Hermitage High School and Virginia Tech alum Queen Harrison winning the event in a 12.64 clocking followed by two other Virginia natives in Yvette Lewis (Denbigh & Menchville HS/Hampton University) in second place at 12.69 and 2012 Olympic 100 meter hurdles bronze medalist Kellie Wells (James River HS/Hampton University) in third place at 12.70. All three finished ahead of the 2012 Olympic gold medalist Sally Pearson of Australian, which is a remarkable feat that one state in the United States can have three women competing as some of the world's best in one event. Harrison was a 2008 Olympic Games qualifier in the 400 meter hurdles, but failed to make the Olympic team last summer in any event as she has begun to shift her focus to the 100 meter hurdles in recent outdoor seasons. Her win in Monaco should build confidence into her training and races this summer and beyond as she will try to make the 2016 Olympic team in Rio. Lewis has dabbled in the multi-events and hurdles only, while Wells was a bit off her form in Monaco as she has a personal best of 12.48 from the Olympics and season best of 12.54 from this year's US Championships as she continues to prep for Moscow and the World Championships later this summer.

Bethel High School and Hampton University product Francena McCorory broke 50 seconds in the open 400 meter dash at the Diamond League meet in Monaco on Friday with a third place performance of 49.96. McCorory, an Olympic Gold Medalist in the London Games on the US 4x400 meter relay team and finals qualifier in the 400 meter dash, had broken 50 seconds on many occassions on the relays as a split, but never in the open 400 until her race this weekend. After finishing 7th in the finals of the women's 400 in the London Olympic Games last summer and finishing 4th in the 2011 IAAF World Championships 400 meter dash finals in Korea, McCorory is anxious to make the finals at the World Championships in Moscow and improve her place as well as time from previous world stage finals appearances.

Most don't realize that she has Virginia ties since she comes internationally for the African nation of Ivory Coast, but Murielle Ahoure definitely has strong roots to Virginia as she attended high school at Hayfield High School and competed collegiately at George Mason University. The last two summers in particular, Ahoure has really closed the gap on the fastest in the world and developed into one of the best sprinters internationally at the 100 meter dash and now showing herself as strong as well at the 200 meter dash in a Diamond League victory in Monaco against a big name in the sport in Jamaica's Shelly-Ann Fraser-Pryce with a 22.24 clocking to win from the inside. It was a personal best by 2 tenths of a secound for Ahoure, who also ran a 100 meter dash lifetime best of 10.91 earlier this summer on July 8th. A runner-up in the 60 meter dash at the 2012 World Indoor Championships, Ahoure was a finalist in both the 100 meter dash (7th, 11.00) and 200 meter dash (6th, 22.57) in the London Olympic Games. Earlier this season, Ahoure scored another upset in Rome when she defeated one of America's best in Allyson Felix.