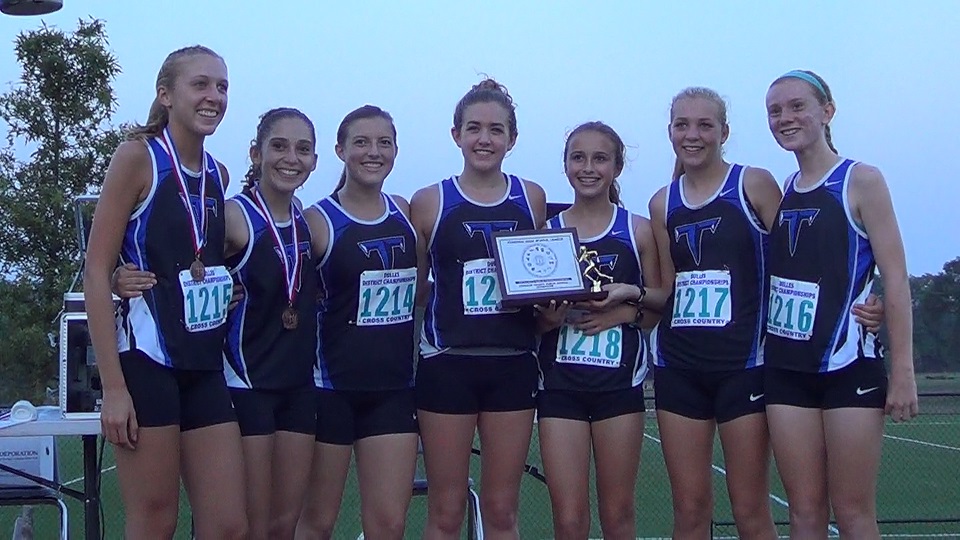 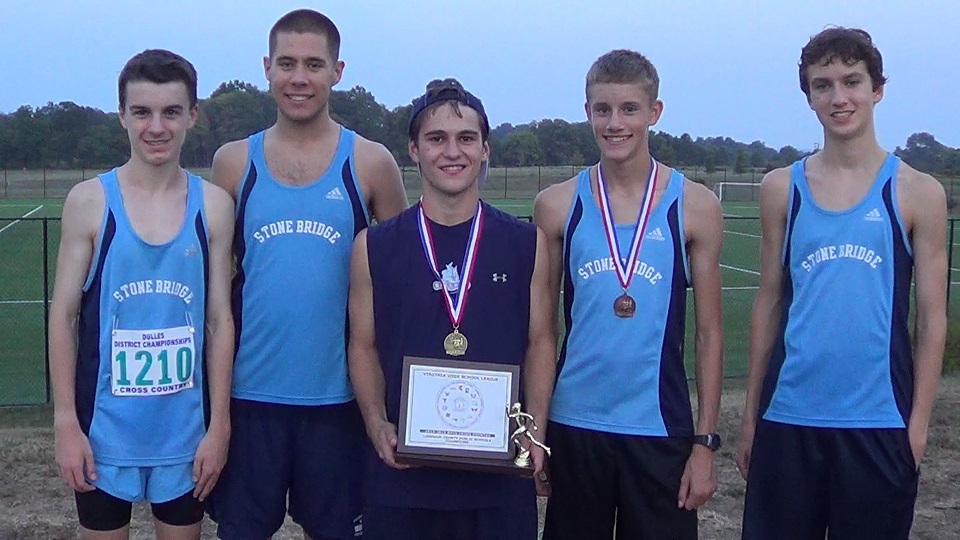 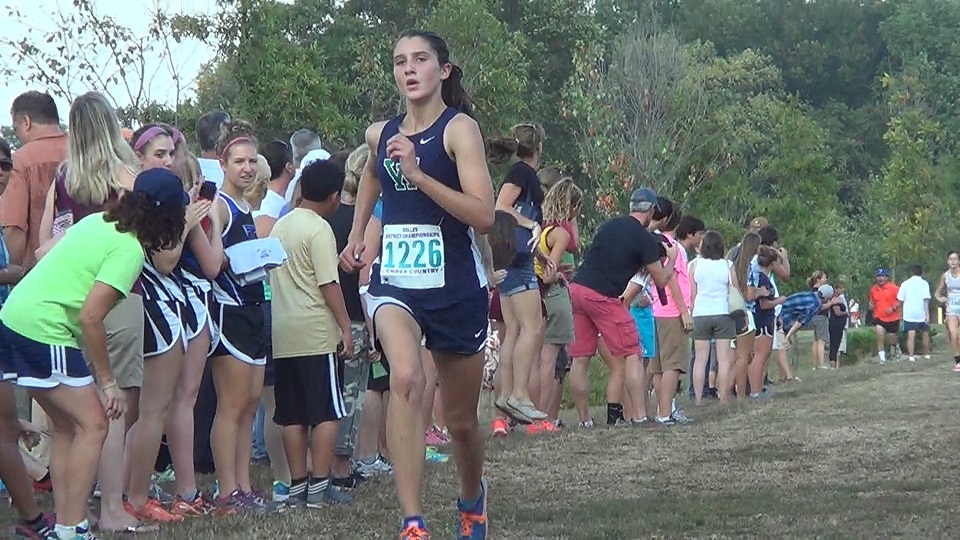 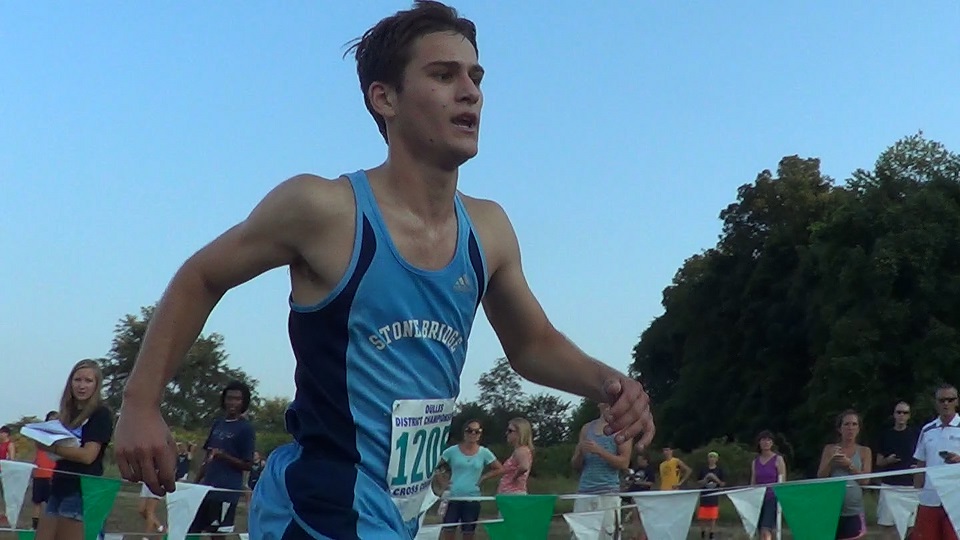 Coaches: Please email us at milestat@gmail.com your kids times in the JV race as we would like to try and compile unofficial results in that race and get those athletes times in our database as well.

Meet Summary: The start of the Loudoun County Public Schools XC Championships were held on Wednesday, September 11th on the school grounds of Woodgrove High School for an incredibly spectator friendly and flat 5K course on predominant short grass surface. Despite a 30 minute lightning delay to start the meet and athletes having to compete in extreme heat with the index certainly over 90 degrees for much of the meet, the meet went on to showcase a hotbed of great distance runners and teams to be found within Loudoun County.

In the girls' race, Woodgrove sophomore Emma Gillies came in as the favorite after coming off a strong opener at the Great Meadow Invite last weekend when she was well over 30 seconds faster than the next best runner from her county. Racing on her home course, Gillies waited longer to make her move to go for the win as Tuscarora senior Natalie Rosas challenged her up until the final half mile when the British accent speaking Gillies (both parents from the UK) then surged to a 19:46 victory.

The British Invasion did not stop there as another sophomore with roots going back across the pond in Heritage's Georgie Mackenzie (from Cambridge, England) moved up well in the last mile to grab second place and her second straight PR performance to start the season in 19:54. Mackenzie was running over 22 minutes in many races last fall, but used a much better track season to propel her to be one of the area's most improved runners this fall.

Rosas was able to hold onto 3rd place at 20 minutes flat after Mackenzie passed her late in the race and lead the Tuscarora girls (59 pts) to the team title over a Woodgrove squad (78 pts) that knocked them off this past Saturday at Great Meadow. The Tuscarora girls figure to be one of the better squads in the 5A classification and averaged 20:48 for their top 5 on Wednesday with nearly five runners among the top 5 in Rosas, junior Anna Wasko (9th, 20:48), senior Colleen Heberle (14th, 21:02), sophomore Me Lazorchak (16th, 21:07), and sophomore Kelly Reilly (17th, 21:07).

Tuscarora's team spread of 1:07 was the difference to defeat Woodgrove, who were strongest thru 3 runners in race winner Gillies, senior Mariah Quintero (5th, 20:17), and sophomore Mary Anna Williams (13th, 20:58) all under 21 minutes, but had to wait 30 more seconds for their fourth runner and over a minute for their fifth to finish. Woodgrove is one classifications below Tuscarora in the 4A classification, which has 2 proven programs in the likes of Jefferson Forest and Midlothian among the state podium contenders, but led by a star runner in Gillies, the fairly new school at Woodgrove could surprise some of the traditional powerhouse programs at season's end.

The varsity boys' race saw a who's who of star runners in the chase pack through the first two miles of the race including Matt Celsa of Potomac Falls, Ryan Hughes of Briar Woods, John Dooney of Tuscarora, and Trent Lancaster of Dominion. All four runners could be All-State cross country runners at season's end, but there were two more runners who coming in expected to be a notch above them and compete for the individual county title in Loudoun Valley sophomore Andrew Hunter and Stone Bridge senior Brady Guertin.

Hunter was coming off a breakthrough season opener to finish 3rd at the Great Meadow Invite and nearly broke 16 minutes for 5K to move him well up in the state's top 25 individual rankings for the first time ever, while the pre-season ranked top 25 runner Guertin was coming off a slightly disappointing 16th place and 15:45 2.98 mile performance at the loaded Monroe Parker Invite. Wednesday's race was an opportunity for Guertin to show his full potential against one of the state's best underclassmen distance runners in Hunter. After the 2 mile mark, Guertin and Hunter decided to make it a two man race and by the time that the got around to the 2.5 mile mark, the Stone Bridge senior Guertin was pressing the pace even more to start his break from Hunter. Guertin timed his move just right as he was starting to run out off a gas right at the finish line with the humid conditions beating him up like most runners in the field, but still able to get across the line in one of his fastest 5K times ever in a 16:03 win.

Hunter certainly ran well to follow up his 3rd place showing at Great Meadow with a runner-up showing at the county meet and continue to consistently running in the low 16s at 16:11. Dominion senior Trent Lancaster (All-State outdoors in the spring at 1600 meters-4:24 best) had the strongest last mile of the chase pack to grab 3rd place in 16:37, which was 11 seconds ahead of Tuscarora's John Dooney (4th, 16:48).

Within Loudoun County are some of the top teams in the 5A classification between Broad Run, Stone Bridge, and Potomac Falls. The matchup between Broad Run and Stone Bridge was highly anticipated after Broad Run started their season with top 3 finishes in two competitive big invitationals at Chancellor and Great Meadow, while Stone Bridge held their own against many of the schools in the state's toughest region in the 6A North at Monroe Parker and finished ahead of other former Northern Region squads now in 5A North between Thomas Jefferson and Thomas Edison. Broad Run is a squad that thrives on the pack, while Stone Bridge's pack is not as tight, but have a certain low score card in Guertin. Stone Bridge (1st, 70 pts) ended up showing that their team matches up well with Broad Run (2nd, 84 pts) on Wednesday as they finished ahead of them in every runner position except their #7 runner to add up to a 14 point margin of victory over another team who has not only strong state meet berth, but podium aspirations in the new classification system. Potomac Falls in third place with 101 pts has some distance to make up on the top two 5A teams in their area before the regional meet, but plenty of time to do it.

Joining teammate Guertin among the top 15 finishers were teammates Jack Morton (10th, 17:14) and Tyler Brodie (13th, 17:18). Broad Run had a trio among the first 15 runners as well in Nathan Vigil (7th, 17:01), Dane Boegner (12th, 17:16), and Ethan Newland (15th, 17:28). Broad Run again had a top 5 spread under a minute at 46 seconds, but will need their pack to move up as championship season approaches or a stronger #1 runner to emerge. Boegner is a good candidate as he was running up with the top pack at the 2 mile mark, but fell back in the last mile. Meanwhile, Stone Bridge's top project will be significantly closing down the 1 minute and 51 second spread on Wednesday from Guertin (16:03) to their fifth runner Joe Valle (24th, 17:54) as the season progresses.

Photo Galleries (full photo gallery to be posted on Thursday):