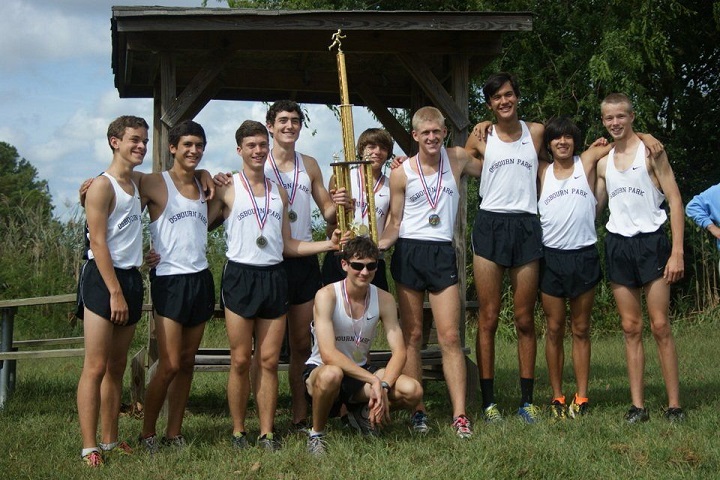 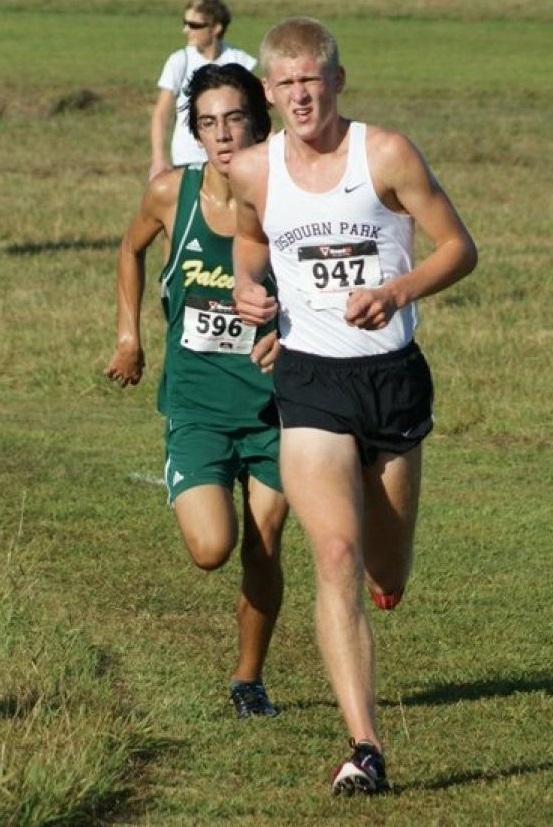 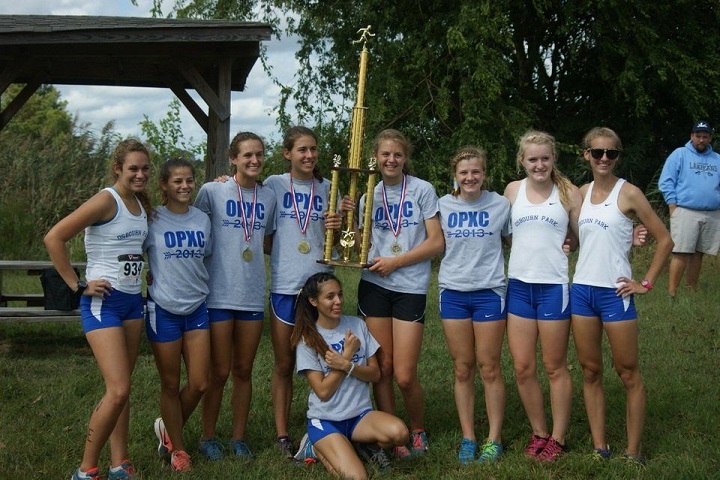 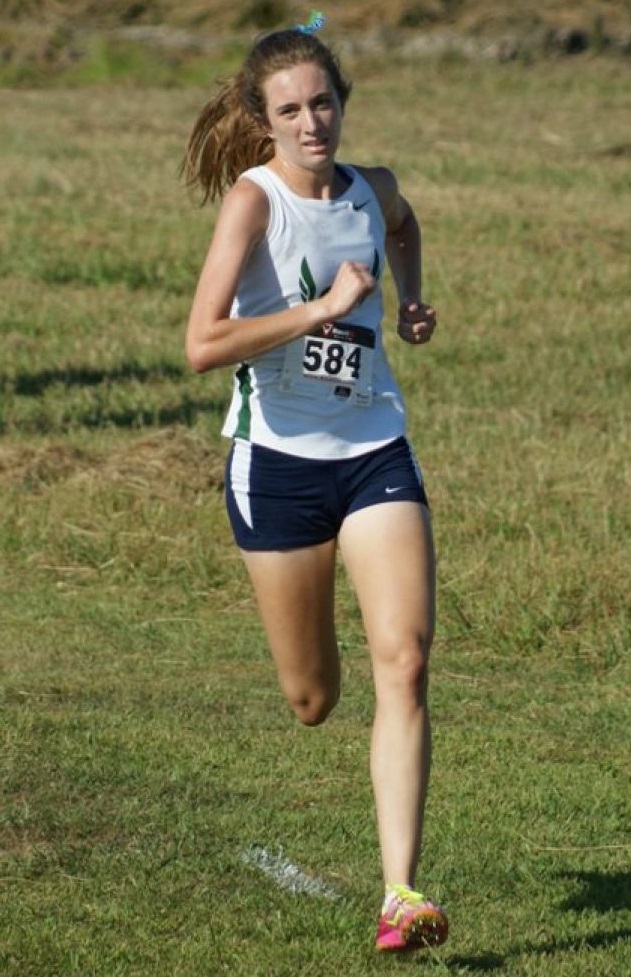 The Osbourn Park cross country team competed at the Bells Mill Park for the first time as they made the trip down to Cheseapeake this weekend to get an opportunity to race on the 6A South Regional course and against many of the teams in that region despite finding themselves in the tougher 6A North Region later this season at Burke Lake Park. Their team raced like they had been there before in sweeping the team titles.

Boys Summary: The boys' squad got a boost in the return of sub 9:40 3200 meter runner Ryan Thompson in his season debut to help Osbourn Park tally a low score of 41 points. Nick Causey led the Osbourn Park boys as he was able to pull away from Cox sophomore Jonathan Lomogda (2nd, 16:01) with a winning time of 15:54. It was a good bounce back race for Causey, who struggled in his first appearance at Burke Lake Park in the Monroe Parker Invitational two weeks ago and builds confidence back for last spring's Group AAA state 1600 meter champion on competing for a state cross country individual title this fall as well. The Osbourn Park boys were the fastest averaging team on the weekend of any Virginia teams in all meets as they took advantage of the flatter terrain in Tidewater with a top 5 posting swift season opening 5K times after racing a 2 mile and 2.98 mile in their first two invitational meets. Following Causey at 15:54 were teammates Jacob Black (5th, 16:14), Kyle Weinberg (8th, 16:24), Ryan Thompson (12th, 16:38), and Nicholas Geleta (15th, 16:42). A 48 second time spread behind a strong ace in Causey is a good sign for the Osbourn Park boys moving forward as they get back to full strength with Thompson back in the mix.

Like Osbourn Park, the Brentsville boys were down in Chesapeake not checking out their regional course like the other 6A South and 5A South teams present as they are in 4A East Regional at Culpeper County High School. However, Brentsville also enjoyed a great first experience at Bells Mill Park with a strong runner-up finish and only 14 points behind Osbourn Park for a 1-2 finish among Prince William County schools. Brentsville had their entire top 7 under 17 minutes on Saturday with Corey Tooke (3rd, 16:12), Richard Knab (10th, 16:31), Jacob Willis (11th, 16:31), Robert Theimer (14th, 16:41), Jack McNally (17th, 16:44), Nicholas Broemmel (25th, 16:53), and Daniel Broemmel (29th, 16:57). Currently ranked #4 in the Group 3A classification, the teams ranked ahead of them in Blacksburg, Western Albemarle, and Lafayette have to become very concerned with Brentsville in seeing their results from this past weekend.

Picking up the last team trophy in the boys' race with their third place finish were the Manchester boys, who were previewing their regional meet course as they move into the 5A South Region from the Central Region. It has been many years since a Manchester team qualified for a state meet, but this year's squad can do more than just make it to the state meet, but could keep for a regional title and top 3 state finish. Cody Wellons led the Lancers with a top 10 finish and 16:24 5K performance. David Lucas (16th, 16:44) and Joseph Hewitt (19th, 16:46) joined their teammate Wellons dipping under 17 minutes in their first invitational races of the season. Michael Hammel (46th, 17:16) and Ben Taminger (47th, 17:17) rounded out the top five for Manchester in 3rd place with 135 points. Taminger ran 5th for the team at the Chesapeake Invite, but certainly is not their 5th most talented runner after winning the Central Region indoor 1000 meter title last year and running 1:55 for 800 meters as a sophomore in outdoor. The Manchester boys will need more from him this fall for them to realize their full team potential.

While Manchester was the best team from the 5A South Region at the meet, Colonial Forge and Stafford in 4th and 5th place battled for mid-season bragging rights for the highest finishing team in 6A South Region. Missing from the meet and racing down in the adidas XC Challenge were the Ocean Lakes boys, who were faster on time average than both Colonial Forge and Stafford on the weekend. Stafford has to feel good about their team position despite finishing four points behind regional competition Colonial Forge as they had their top runner and All-State performer Joey Abbattiello ease himself back into racing as he comes back from injury compete in the "B" race, which he won by 47 seconds in a time of 16:46. Insert Abbatiello into the varsity "A" races and the Stafford boys get a 45 point swing to put them well ahead of Colonial Forge, but still have to take into account that Ocean Lakes was not at this meet and ran very well in Cary.

Girls Summary: The Osbourn Park girls (58 pts) were able to defeat two higher ranked squads who were both coming off invitational wins in Mills Godwin (2nd, 64 pts) and Colonial Forge (4th, 157 pts) with 5 finishers among the top 17 places. The Osbourn Park girls had good representation near the front of the field with Jillian Everly (5th, 19:04), Jessica Gray (8th, 19:45), and Helena Mulder (10th, 19:56), but it was the races from Alyssa Johnson (17th, 20:21) and Maria Tabarez (18th, 20:22) which allowed them to defeat the current top ranked 5A squad in the state Mills Godwin. The Osbourn Park girls probably wish they were in the 6A South region, which they could certainly compete for the title in, yet are stuck in the 6A North region, which will see some very good teams unable to make it to the state meet and advance as a top 6 team from the regional championship.

Godwin had a slightly strong top three than Osbourn Park including two finishers ahead of Osbourn Park's #1 Everly in race runner-up Katharine Benfer (2nd, 18:36) and Hannah Bullen (4th, 18:59), but an over two minute spread between Benfer and the team's fifth runner kept them from winning their second invitational of the 2013 season. Bullen is late bloomer for the Godwin girls as the senior has already knocked a minute off her previous 5K PR from a year ago and having modest track bests of 12:29 in the 3200 and 5:35 in the 1600 to now be running sub 19 minutes this fall.

It was not a surprise to see Osbourn Park and Godwin ahead of the Colonial Forge girls ahead in the team standings, despite Colonial Forge having won two invitationals this season (Chancellor & Pole Green Classic) as well as a runner-up finish to VA #2 ranked Oakton at the Great Meadow Invite. However, the Stafford girls grabbing third place ahead of Colonial Forge was eye opening as now Colonial Forge will not only have to contend with Ocean Lakes for that 6A South Region title, but Stafford as well who have ran better than expected in the early stages of this season.

The Stafford girls did not have a single individual among the top 15 finishers, but had a top 4 four come in a quick burst not too long after with McKenzie Symm (20th, 20:28), Ana Nosal (22nd, 20:34), Bridget Abbatiello (23rd, 20:38), and Alexa Putka (24th, 20:40). Despite over 2 minutes lapsing from Colonial Forge's first finisher in race champion Rebholz crossing the line and Stafford's first finisher in Symm, the Stafford girls (136 pts) still managed to score 21 points less than Colonial Forge (156 pts) for third place.

Colonial Forge's front runner Megan Rebholz was a little better on this day than Mills Godwin's front runner Katharine Benfer (2nd, 18:36) by 9 seconds with Rebholz's third invitational win of the 2013 season. Both are strong favorites to be regional champions at Bells Mill Park when they return in November on different dates and different regional championship meets. Rebholz has been a very consistent and strong performer through the first month of the season and will look to keep that streak of great races going into October and November.