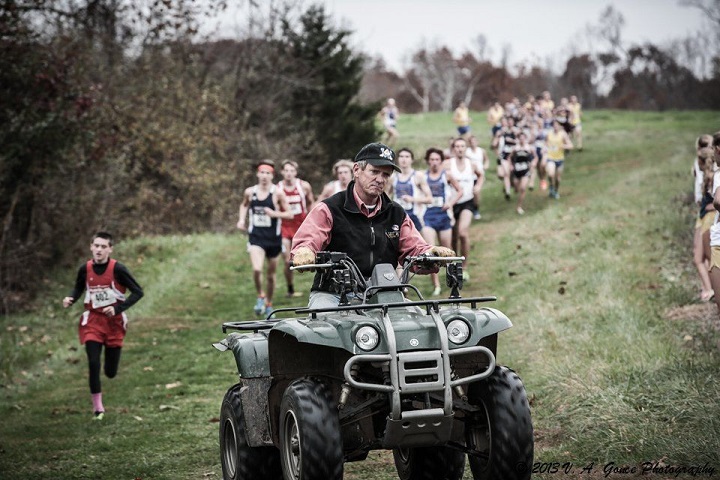 Steve Murray, owner of Panorama Farms, driving the lead gator in the championship boys' race at the 3A West Regional Meet on Tuesday. (Photo by Arnel Gonce)

The Blacksburg boys and girls both claimed the 3A West Region titles on Tuesday at Panorama Farms outside of Charlottesville led by race champions Kenneth Hagen (15:56) and Bonnie Angermeier (18:25), while the regional host Western Albemarle boys and girls gave honest chalenges to them and had to settle in the runner-up seats. Read more below in girls meet summary and boys meet summary.. 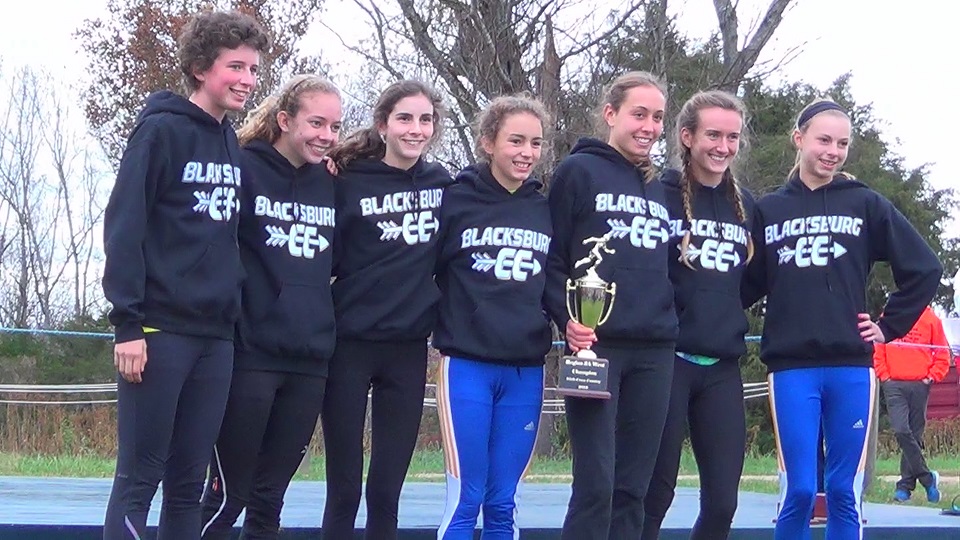 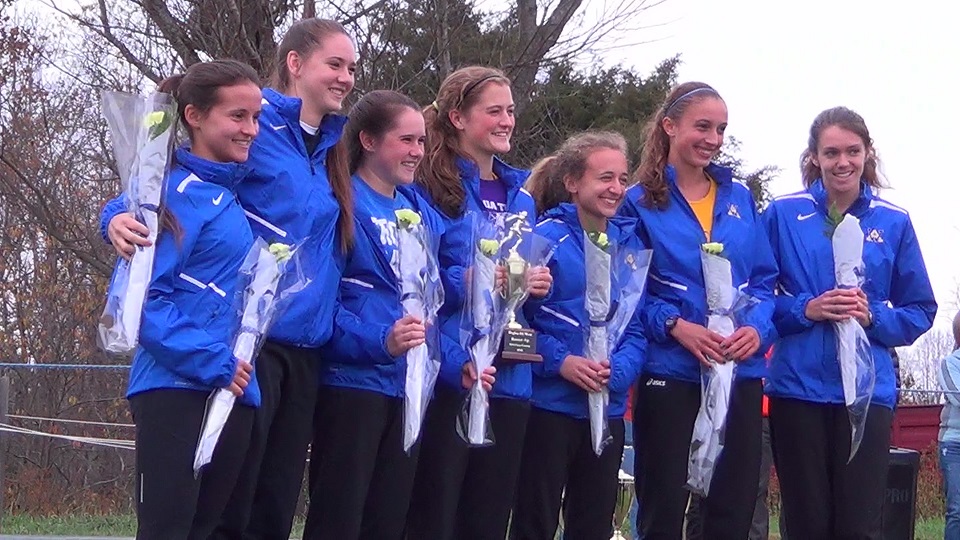 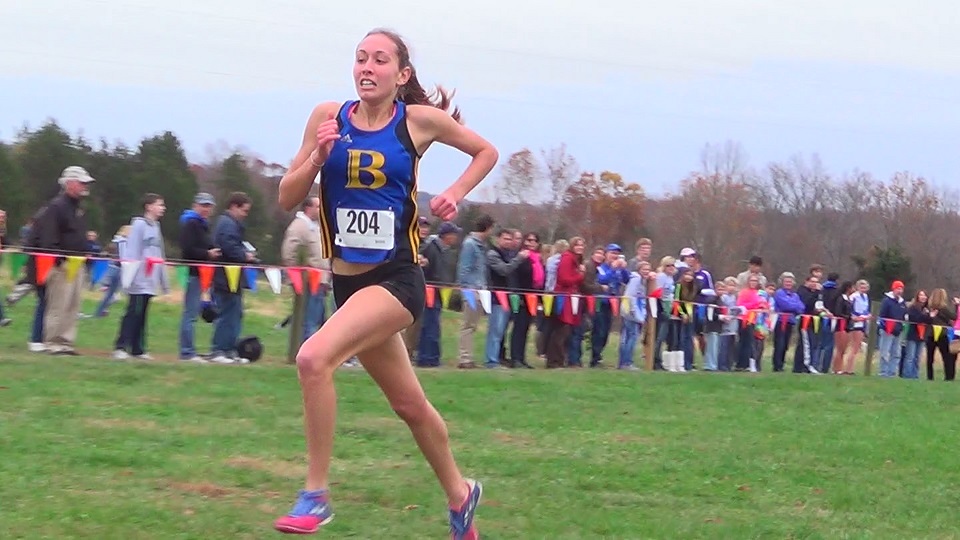 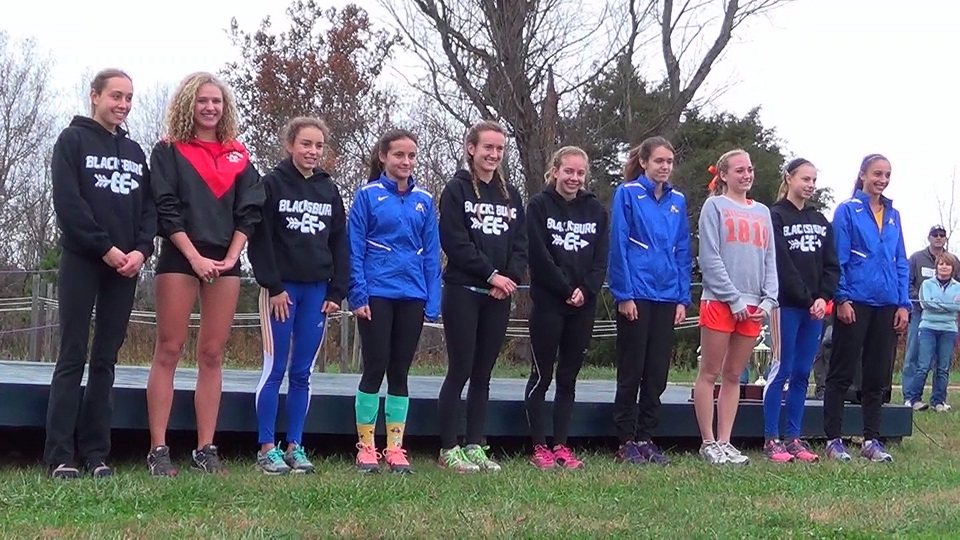 Girls Meet Summary: The nationally ranked Blacksburg girls rolled through their regional meet as expected as they matched the same low final score of 24 points, which they posted in the last trip to Panorama Farms at the Albemarle Invitational. A slightly less, but still dominant performance than that race in larger field and against deeper competition. However, the Western Albemarle girls had a hand in that as well as they ran much better head-to-head as the second ranked Group 3A squad and regional runners-up on this day with 61 points and a team average of 19:47.

The Blacksburg girls are one of few high school teams to have ever averaged under 19 minutes at Panorama Farms at 18:58 on Tuesday with race champion Bonnie Angermeier (18:25), Claire Ewing-Nelson (3rd, 18:49), Emily Beatty (5th, 18:59), Jennifer Fleming (6th, 19:15), and Samantha Marin (9th, 19:22) all finishing among the top 10 places to easily secure their first of potentially many future regional titles in the 3A West Region. Ewing-Nelson is the lone senior of the group and has been a steady performer all fall and would be the #1 runner on most teams in the state.

​Annie Taylor of Western Albemarle tried to set the tone for her squad and make a break from the field early on, but Blacksburg's Angermeier and Cave Spring's Katie Fortner responded and countered the move to take over the lead for good after the hill at the two mile. The Blacksburg junior Angermeier had defeated the Cave Spring senior Fortner in a handful of races this season including a 10 second victory last week at the Conference 32 meet, but found it a lot tougher to shake Fortner in the regional race and wasn't able to create separation until the final 100 meters to claim the 18:25 victory. Fortner walked away from the race as a runner-up by four seconds and near season best time of 18:29 with greater confidence of her chances to compete for the Group 3A state title next weekend at Great Meadow following one of her better races of the season after being a sub 18 minute 5K performer in her sophomore and junior years. Fortner will have plenty of good company at the startling line at Great Meadow as the Cave Spring girls qualified as a team in fourth place with 114 points.

Western Albemarle junior Annie Taylor (4th, 18:56) also will be in contention at the state meet as well coming from a loaded region meet of Group 3A's best after possibly running too aggressively in the first half of her regional race. Taylor was one of 3 Western Albemarle girls earning All-Region honors with top 10 finishes as freshmen Averi Witt (7th, 19:17) and junior Chance Masloff (10th, 19:30) both dropped their personal bests significantly and shortened a previously large time gap existing between #1 runner Taylor and their next fastest runner in previous races.

William Byrd's Darby McPhail has made a strong comeback to finish her season after suffering from mono midway through the fall. McPhail was an All-Region performer in the race in 8th place with a season best time of 19:20. After breaking 19 minutes last fall for 5K, the mono slowed her down this season as she ran a time of 20:35 at Panorama Farms less than a month ago at the Albemarle Invite, yet bounced back to run 75 seconds faster to advance onto the regional meet. The William Byrd girls also advanced as a team as their strength was found in their top three runners with top 25 efforts by McPhail, Kate O'Connor (18th, 20:16), and Ana Martha Lopez (21st, 20:26).

The Hidden Valley girls mave have given Western Albemarle a bigger scare for second place, but the lack of a front runner on this year's squad hurt them with Western Albemarle putting 3 runners ahead of the first finisher for Lady Titans in Carly Weidner (16th, 20:00). The next three for Hidden Valley came in shortly after Weidner in Heather Mwitanti (19th, 20:18), Helena Harding (20th, 20:19), and Leslie Weidner (24th, 20:35), but a near top 5 tightly bunched pack fell apart on the back end in the always critical fifth spot to create a total spread of 1:45 and push them back to third place with 98 points. If Hidden Valley can fix the back end of their pack in a week's time, which they have proven in earlier races that they can, the race for second place at the state meet could get interesting.

Monticello (164 pts) narrowly edged out Turner Ashby (166 pts) by two points for the sixth and final state meet qualifying spot. The two teams have had close matchups in the last two weeks as the Turner Ashby girls were the Conference 29 runners-up by one point over Monticello last week, but the Monticello girls received a consolation prize of missing out on a runner-up team trophy last week in earning a starting box for next weekend's VHSL State Championships. 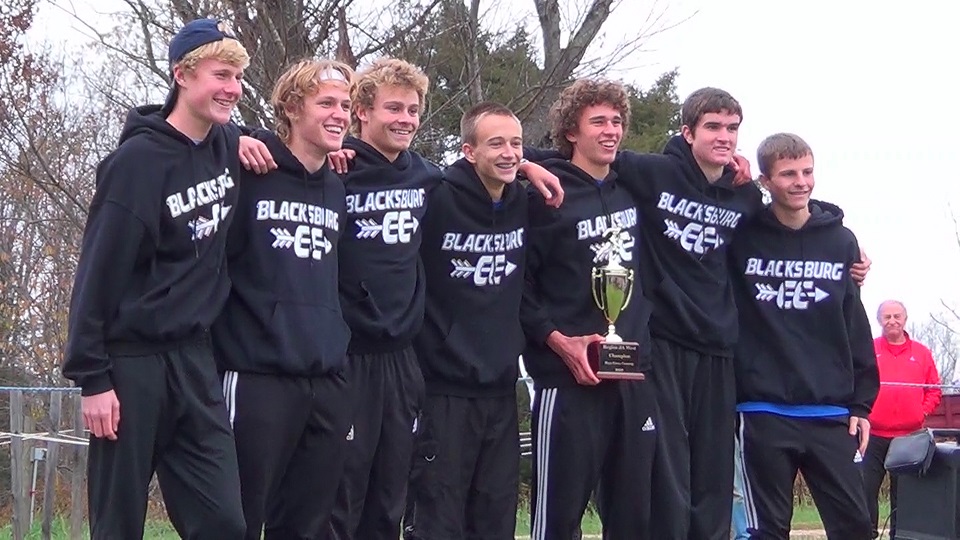 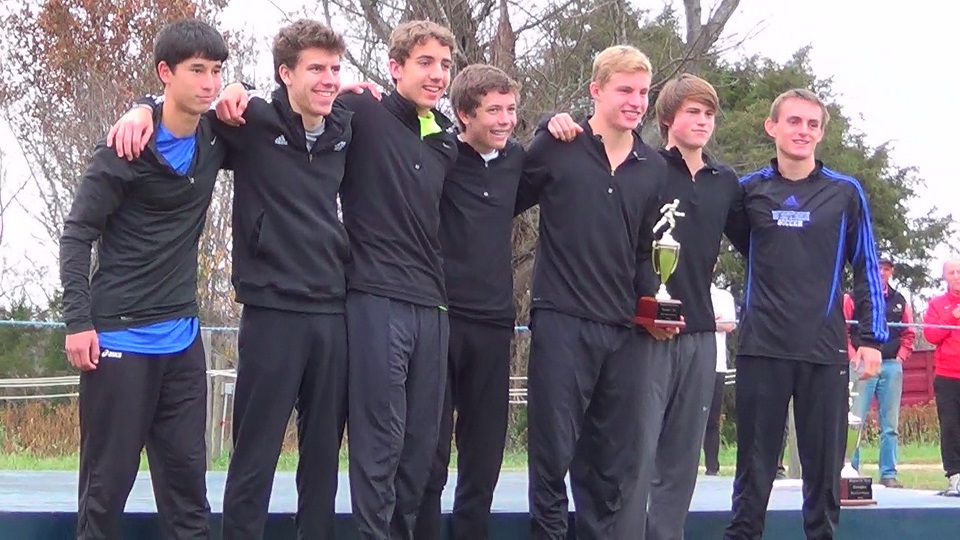 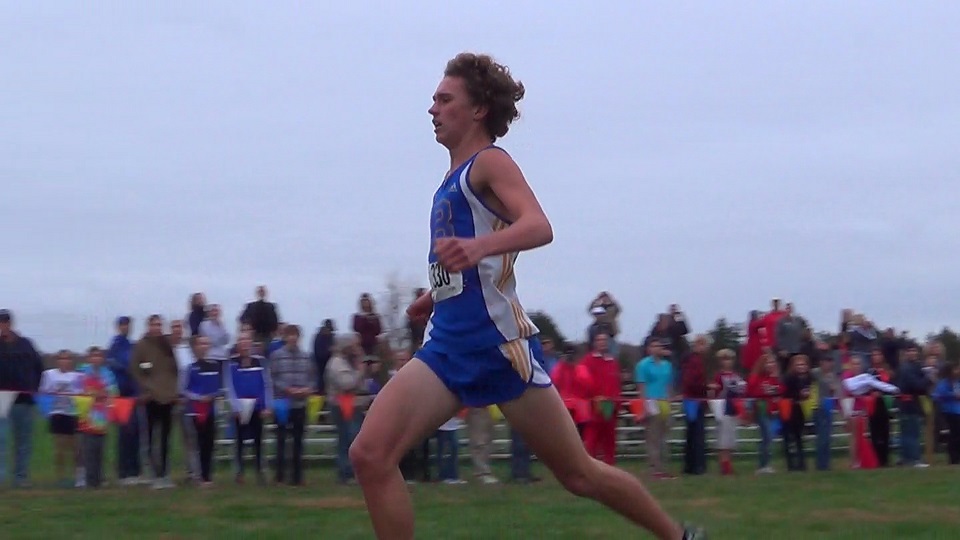 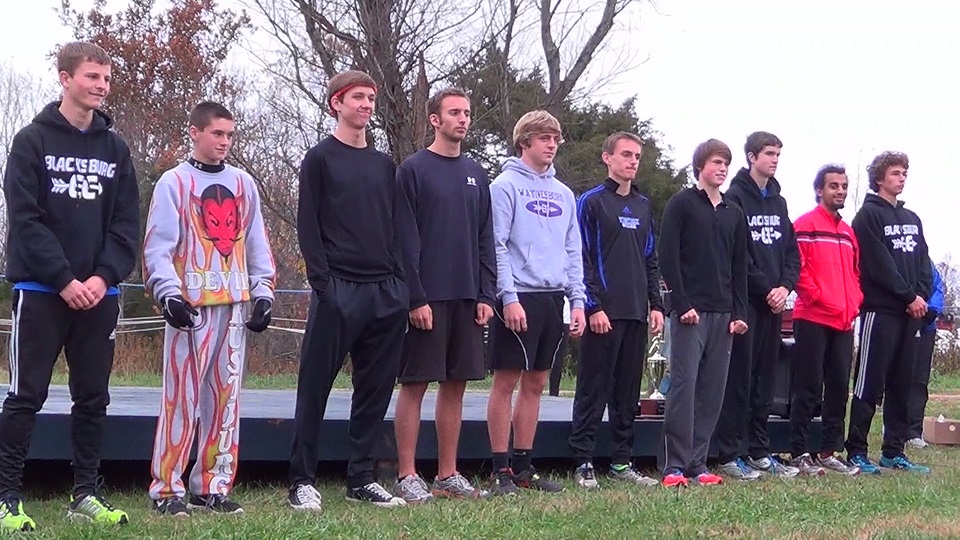 Boys Meet Summary: The four-time defending Group AA state champion Blacksburg boys, who will attempt to go to 5 straight titles next weekend but in 3A now in the new 6 class system, were seriously challenged by the Western Albemarle boys than their last encounter also at Panorama Farms in the Albemarle Invitational. The Western Albemarle boys ran a much more conservative first half of the race including #1 runner Gannon Willcutts holding back and likely sacrificing a potential regional individual title for himself, but gained a lot of ground in the last mile and a half to end up only 10 points behind Blacksburg. With a winning team score of 33 points, Blacksburg beat Western Albemarle (43 pts) in every position #1 through #7, but Western Albemarle was only 2 points behind at each position.

The race went out for the first mile and beyond led by a freshmen in Rustburg's Colby Hudson, the winner of last week's Conference 30 meet. Hudson was able to hold onto a 9th place finish in 16:37 and advance to the state meet as one of the top 10 individual qualifiers from the non-advancing teams. The race ended up breaking after two miles with Blacksburg's Hagen and Alleghany's Gaige Kern surging to the front with Willcutts moving up into top 5 position, but still distance to make up from earlier. In the final straightaway, Hagen and Kern shifted into another gear, but the 1:52 half miler Hagen found a little more turnover in his legs to win the regional title with a 15:56 PR. Kern, a winner earlier in the season at the Metro Championships and varsity B race at Knights Crossing was only a few steps behind also timed at a 15:56 personal best.

Blacksburg took 2 of the top 3 places with Hagen and teammate Noah Combs in third place at 16:04 as he was able to just hold off a hard charging Gannon Willcutts, while Flip Bishop also broke into the top 10 for Blacksburg with a 16:42 clocking. Western Albemarle matched up much better up front with Blacksburg than at the Albemarle Invitational with the emergence of senior Chris Ferguson in championship season as he made his second straight PR drop in consecutive weeks following a 15 second PR at the conference meet (16:40) with a fifth place regional performance of 16:18.

Joining Blacksburg and Western Albemarle in the state meet from the 3A West Region will be full boys' teams from Turner Ashby (3rd, 145 pts), Hidden Valley (4th, 148 pts), Christiansburg (5th, 157 pts), and Lord Botetourt (6th, 162 pts). Turner Ashby and Christiansburg both made it to the state meet with great packs under 40 second spreads despite neither having one individual runner dip under 17 minutes at Panorama Farms, while Hidden Valley and Lord Botetourt both had at least one runner picking up lower score cards for them. Hidden Valley had two runners in Eli Harding (12th, 16:43) and Noah Long (16:58) under 17 minutes, while Sammy LeHardy also finished among the top 25 for the Titans. Grabbing the final state meet spot, the Lord Botetourt boys earned their first state meet berth that one recall in many years if possibly making their first trip ever as Conference 31 runner-up Scott Black paced them in 14th place (16:44) individually.