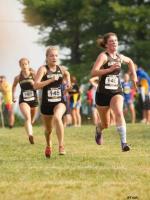 The Last Big One Before The Post-Season; Mid-Area Track...
Check out our recap of the 2015 Mid Area Track Classic, one of the last invitationals of the year....

Willcutts Wins, Angermeier Signs, Blacksburg Beats Ever...
The winds of southwest Virginia settled down in the afternoon yesterday to welcome 12 teams and 30 individual qualifiers to the 3A West Regional Championship meet. Spectators and athletes who’ve e...

North Carolina, Say Hello To Blacksburg and Libby David...
With big meets come big competition and for this week&#39;s Adidas Challenge down in Cary, North Carolina that is going to mean a lot of the top kids in Virginia are going to be meeting some new compe...

VHSL Group 3A/4A State Outdoor Championships Complete R...
Despite the lack of official results for hours after the meet, anyone there and basically anyone in the state knew this classification had some fast times. After both days of competition that was only...