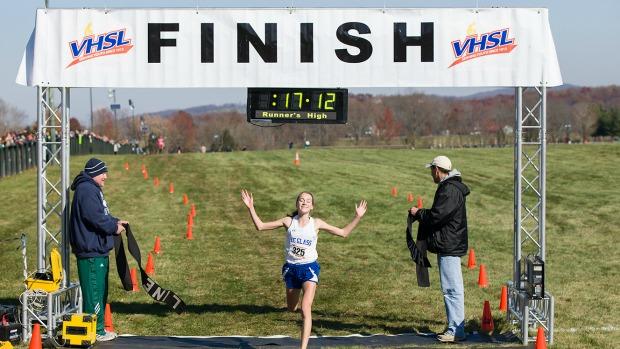 
The day of the race it was frigid.The wind was racing across the hills and despite all of this Libby decided that the time was right to open up her stride and go for it. Through the first half of the race she was side-by-side with Weini Kelati and it looked like we were going to have a race to the line. Libby was just too strong though and slowly pulled away from Weini after the 2 Mile mark. Libby was near record pace throughout the entire race but it did not cross many people's minds that on a day like that that she could get it.

As she came down the long stretch the crowd cheered her on and she sprinted as best she could as the clock counted up. She crossed the line in 17:12 & some change which rounds up because of the chip timing to 17:13 officially. That meant she beat the previous state meet record, set by Caroline Alcorta (West Springfield) just a year prior by just a second.

One of the best parts of the whole moment was the fact that Libby was so excited about winning a state cross country title that she didn't even realize until she was interviewed that she had broke the state meet record!

Check out her race and interview here: