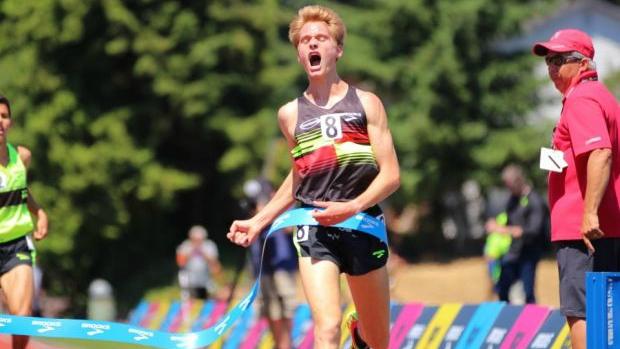 Whoever created the whole "Stop Drew" trend, we hope you trademarked that because it is going to become huge this year. Each year your classification or region or even conference has a dominant guy that no one can beat. This past year we had junior sensation Drew Hunter play that role. He was completely undefeated in cross country (in Virginia/NC) and Outdoor track (in VA/PA not including the 800). He ran some phenomenal races, especially winning the mile at the Penn Relays just a year after winning the 3K. But after all his amazing races and performances we knew he had more left.

This June, at the Brooks PR Invitational, we finally got to see Drew really race. He would have broken 4 minutes in the mile had it not been for getting boxed and hitting the rail at the Dream Mile but this week he made sure he was not in that position. The race was a full 2 Mile and featured some of the best distance talent ever assembled for a single high school only race.

The race started out perfectly for Drew, he was near the front but not breaking the resistance for everyone else. He slowly helped push the pace until the final laps where he began to take the lead. At 500m to go he started his sprint to the finish and right to his side was the infamous Grant Fisher. Fisher was a two-time Foot Locker National Champion and not to mention undefeated for two years. Drew through it into gear and stormed down the straightaway that final 100. He made one look back and then his face said it all! 8:42.51! That was one of the 10 fastest ever run by a high schooler and in the process he broke the state record and Fisher's winning streak.