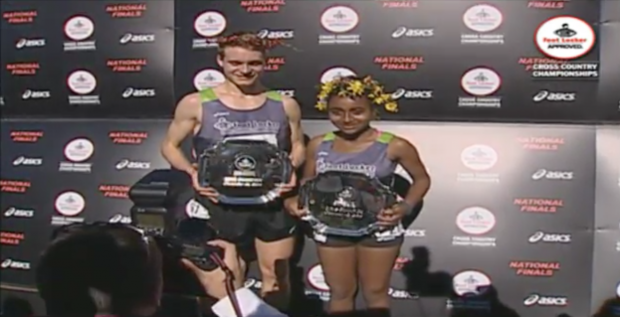 History inevitably repeats itself but only 30 minutes later? That is surreal. As the sun rose this morning all seven Virginia competitors in the two races were a part of a 29 year gap from Virginia winning a Foot Locker title. That ended quickly with Kelati's win but even a 30 minute title drought for Virginia was too long as Andrew Hunter blew away the competition to win wire-to-wire just like his Loudoun County counterpart in 14:55!

The race opened fast but 800m in Drew made a quick move around the turn and opened a lead. This isn't a completely new idea to create some distance between the field, especially for Drew, but the way he did it was surreal.

Drew was not going to be stopped today. Despite there being 40 of the very best in the entire nation, his lead kept growing and grew to a monster 17 second lead at two miles when he went through in 9:25. Gannon Willcutts was Virginia's second runner through the two mile in 9th at 9:52 and Jonathan Lomogda was just behind him in 11th at roughly 9:54.

"Quite Confidence is what we refer to it as, I just went with it and didn't turn around. Head down and keep plugging away." - Drew Hunter after the race.
Drew just kept going and crossed the road just 10 seconds off of the meet record pace. He powered up the course and the crowd went wild. He was not only the best runner but also the biggest star our sport has had since last spring. 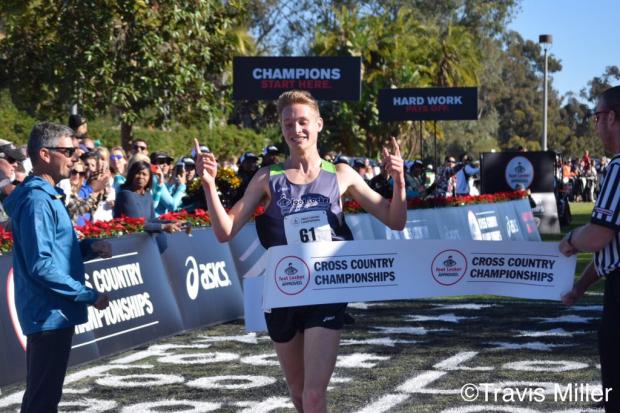 Photo by: Travis Miller
Down the final stretch he went and through the line in 14:55 to run one of the fastest and most impressive races ever at Foot Locker Nationals. He is Virginia's first boy winner since Charles Alexander won the race in 1981! The race was run in Florida that year meaning this was Virginia's first male winner in San Diego history.

"It is just surreal to finally win Foot Locker." - Hunter after the race