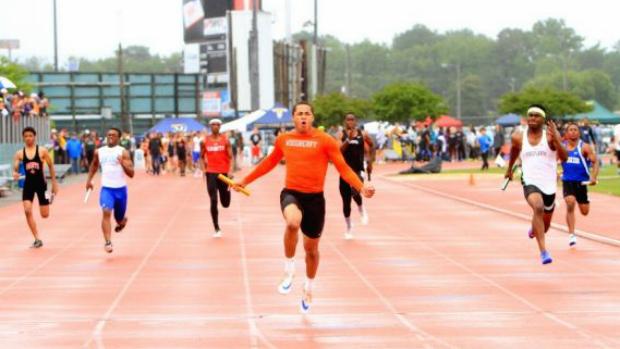 In the first state championship of the 2016 Outdoor season we got treated with a whole bunch of lasts and a first as well. Like all state championships, the VISAA State Meet is really the last meet of the year for a lot of seniors. It is their swam song. It is definitely bittersweet to see them leave but also it is great to see athletes having competed for so many years and to be so highly decorated.

Some of these athletes making their final state meet appearance were Alex Lomong, Brandon Thomas, Michael Davenport, and Ellie Vest.

Though we saw a whole bunch of lasts, there was one awesome first we also got to see and that had to do with the team title race. Taking home the crowns for D1 were Norfolk Academy and Woodberry Forest. Both of these teams held off a late push from St. Catherine's and Fork Union respectively.

The real story of the meet though had to be the D2 team titles that came down to the last finishers in the 4x400...to say the least. In the girls' D2 competition because of Walsingham winning the 4x400 saw both Walsingham and Broadwater Academy take home the team title with 112.33 points each! If that wasn't enough, the boys' decided to do the same and Peninsula Catholic pushed a late surge in the 4x400 to finish with 102 points to tie Broadwater Academy. This was quite bizarre to happen once but twice was just unbelievable.

So to sum this up... both defending team champions did everything they needed to do in the 4x400 to tie Broadwater and finish tied for both of the team titles.