After popular demand from XC and the indoor season, MileStat' Jim McGrath continues the feature of 10 stories from the state meet. He was at the 5A6A State Meet and had no instructions on what to cover, but needless to say these are all some interesting stories!

If Coach Toukene was mildly surprised, it was only because the first half of the Friday's 6A boys' triple jump was short of fireworks, particularly from the junior jumper and hurdler. Entering the finals, Williams was in second place, behind Hasani Knight of Landstown and just ahead of South County's Perry Donkor, who was the top seed entering the competition.

While Williams was the #2 seed, he was winless in competitions against both Knight and Donkor.

On his final jump, Donker landed a 48-3, good enough to take the lead and beat the existing 6A meet record.

Williams was next. He had a 48-6 personal best in the triple jump, set last year at the Penn Relays. He would need a similar effort in order to finally win over his two rivals. Armed with that knowledge, the Bruin went through his routine.

But first, he said a prayer, just as he always does.

"I said a prayer to my grandmother," said Williams. "She passed away last October." If there is such a thing as divine intervention, perhaps Hazel Gatlin was paying attention and ready to intercede. Through his first five jumps, Williams had been making the same mistake, repeatedly.

"I didn't hit the board all day," said Williams who started his first five jumps from at least four inches behind the landing board. "Before the last jump, Coach (Jeffrey Artis) said that if I hit the board, I could go 49."

Williams made his approach, and on the last step, landed squarely on the board.

Asked how he felt at that point, Williams noted, "I knew it was going to be a good jump."

In fact, it would be his best. With a hop, skip, and jump, Williams leapt into the lead, and state record book with a 49-1.5. When Knight made 48 feet on his last attempt, redemption was his.

"I felt good, and felt like I came out of nowhere. I was thinking that I can't let both of them beat me and my teammate (Akinshe Hill) again." 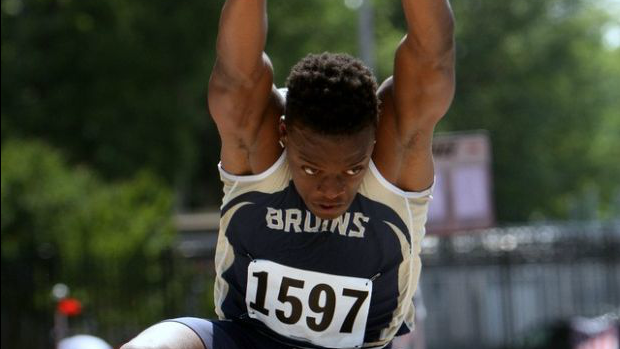 Williams plans to compete in next weekend's New Balance Nationals and has set the goal of "trying to hit 50."

Williams' day was enhanced by another personal best, as earlier in the day, he claimed a 14.85 in the 110-meter hurdle trials, good enough to make Saturday's finals.

All of this has made for an auspicious start to his Western Branch career. Williams transferred to the school from Churchland in December. Asked about the reason for his transfer, he recalled the first time he saw the Bruin team at a meet.

"I was at an indoor meet (with Churchland) and remember seeing Western Branch and all of the great hurdlers they had," said Williams. At the time, I thought that they had what I was looking for as far as training for the hurdles. So I transferred."