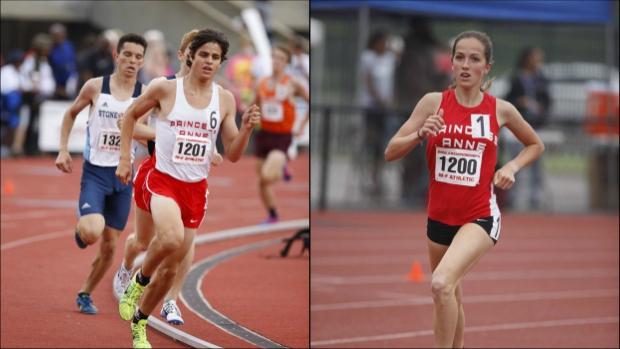 Sports have had its share of brother-sister pairs. In the early 1970's, there were Billie Jean King (tennis) and Randy Moffatt (San Francisco Giants pitcher). Speed skaters Eric and Beth Heiden in the 1980 Winter Olympics. Tracksters Carl and Carol Lewis of the mid-80's.

In Virginia Beach, the brother-sister combination of Harrison and Doria Martingayle have dominated the South Hampton Roads long distance track events on behalf of Princess Anne High for the past three years.

On the opening track event for Saturday, it was Doria who struck gold, winning the 5A girls' 3200 in 10:59.38. Later in the day, Harrison placed fifth in the 1600, with a time of 4:19.61, almost eight seconds behind winner Waleed Suliman of Douglas Freeman. Doria's 10 points helped the Lady Cavaliers to a fourth place team finish.

Regardless of their placings at States, success for the Martingayle's requires a team effort.

"There's a benefit to working together," said Doria, who as a junior is one year behind the soon-to-be graduate Harrison, but 23 months younger. "He knows what goes through my mind. He knows my form and mentality."

"(Training with Doria) helps a lot. High school students already have a lot of distractions, so it's good to have a home base. We have an older brother, who is running as a college freshman, so we have some competition. But it's healthy, and I might be like...oh, so you won a state title, now... But, when she does well, it motivates me to do well."

The running branches on the Martingayle tree stretch farther than the three siblings. Their father Kevin ran for Collegiate High (Richmond), and later for Hampden-Sydney College.

Harrison will begin his own college running career next year, as a Tiger at national powerhouse LSU. He will report to Baton Rouge in mid-August, but expects to feel lonely at the outset. However, there is a valid reason for this isolation.

"Khadevis Robinson is the distance coach at LSU," said Harrison. Robinson is a former two-time Olympian and world-class 800 runner (best time of 1:43.68), one of many top-shelf track athletes, including American record holder Johnny Gray, former world champion hurdler Greg Foster, and sprinter Jeannette Bolden, who have made the transition from professional competition to college coaching.

But, since LSU is a perennial top-five nationally ranked team, their roster is littered with Olympic Trials qualifiers, and the list of past Tiger athletes includes Lolo Jones, Kimberlyn Duncan, and Richard Thompson. In all likelihood, Robinson will be preparing several of his runners for the 2016 Rio Summer Olympics in mid-August, and will be M.I.A. from the LSU campus.

This is not a problem for Harrison.

"When I looked at schools, I was looking to see the number of people transferring. LSU has this, but it's more about people who are transferring IN."

He also has no idea what events he will be running next year.

"I might get bounced around. Coach Robinson said he doesn't know what I'll do yet."

Harrison has one hope for a future event.

"I'm hoping to get to do the steeplechase. The first time I competed, I won the race, and that was with only one lap of practice. We went over to Norfolk State and I did one lap. Jumped over the water barrier, but there was no water in it."

Harrison may be missing the water, as his summer activities include competing in organized lifeguard competitions, including a regional event, taking place in Virginia Beach just before he leaves for Louisiana.

And what will Doria miss most about her brother's absence?

"His advice. When I run the two-mile, he will tell me who to go with. He also helps me with the shorter races."

And while Doria will also miss the long "casual" runs with her brother on Sundays, she won't miss the tempo runs or track workouts.

"He's always trying to shake me as he tries to run a faster mile. And he kills me during track workouts!"