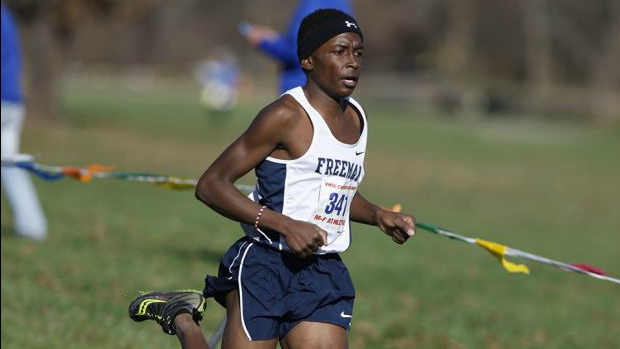 93 seconds decided last year's hotly contested boys 5A team title and this year it could be an even smaller margin that decides the closest team battle of them all. Winning the title of course was Stone Bridge (78 points) who edged out close neighbors Thomas Jefferson S&T (84 points) and Tuscarora (92 points).

Glen Allen, Douglas Freeman, and Menchville all also gave strong chase but it seems that this year it will be their time to shine.

Leading the way into the preseason are the Rebels of Douglas Freeman who have Waleed Suliman at the helm. His 15:10 performance is the fastest returning time in the state of Virginia and likely just the tip of the iceberg for his talent. Though most will not be brave and say it now... he is a serious contender for every title this year, including the Foot Locker South title.

He is going to be chased in this race by mile specialist Bashir Mosavel-Lo (Deep Run) and two mile specialist Saurav Velleleth (TJ). Both of these athletes will push Suliman but it looks like their battle will be more for points at this stage in the season.

The 5A classification returns seven sub 16-minute guys which is the second most of any classification being only behind 4A. Three guys though have run 16:01.5 or faster too making this one of the deepest all-state preseason classifications.

When it comes to team battles though this classification always finds a way to make things very exciting. In track it is always the 4x8s and in XC it is always this team battle. This season is going to be no different.

The early favorites like we said before are the Rebels of Freeman but they have some close company with Menchville very close behind. Glen Allen, TJ, Deep Run, Atlee, Stafford, and Tuscarora are also in the mix of things.

The real sleeper of the group though is Glen Allen whose fifth runner (Dave Kaul) is slated to score a big 125 points. If he drops his best time from 18:08 (run at MileStat.com XC Invitational) down to 17:30 that brings the gap from 90 points to a manageable 40. After that though the points come a lot quicker with every 10 seconds of improvement equaling about 10 points.

Unlike last year though, this year it seems that the 5A South meet will be the best predictor with the three teams squaring off prior to the state meet in what could be the VHSL's version of the NCAA's pre nationals.