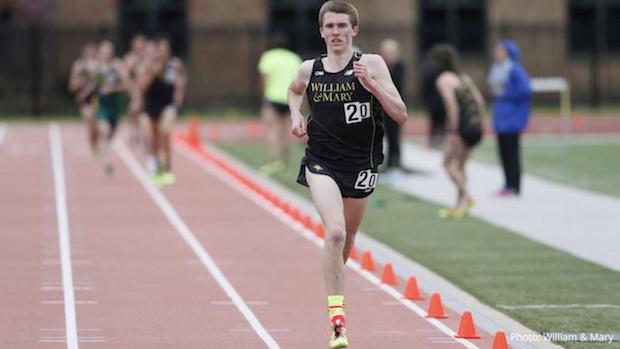 This piece originally appeared on FloTrack.

Sean McGorty may be the best American distance runner in his graduating class in the NCAA, and Brandon McGorty was the only high schooler to beat Drew Hunter last year. But right in between them is their middle brother, Ryan McGorty.

Ryan is no slouch -- he ran 3:51 in the 1500m last year for William & Mary. But he's not nearly as well-known or fast as his brothers, a curious dynamic that forced him to grow up quickly. Ryan is two years younger than Sean and two years older than Brandon. FloTrack interviewed him for McGorty Day.

FloTrack: Between your brothers and being coached by Chris Solinsky, you've been surrounded by American distance running royalty. How much do you enjoy that, and how much do you have to tune it out?

Ryan McGorty: In high school, it was very interesting. When Sean came in, he did amazing things his freshman and sophomore year. So when I got there, it was like "What can Ryan do? Is he going to be as good as Sean?" And I dealt with that a lot my freshman and sophomore year. But I realized from talking with Sean that I gotta be my own person.
And when Brandon came along, people said that about him. But he turned around and did extraordinary things.

I've used it to help me. I have knowledge from Brandon and Sean, who are two amazing runners. If I ever had a question my freshman or sophomore year of high school, I would just ask Sean. Even in college, if I have a question about running, I can turn to Sean or turn to Chris.

When you have people like me asking you about your brothers, how often do you have the thought "Excuse me, I'm pretty good -- I'm a top five runner at a strong Division I program and a 3:50 1500m guy?"

I'm used to it now. I've gotten it the past six years. My team will sometimes joke about it. There are Sean and Brandon comments at practice, but I can take the jokes and still know that I'm a good runner -- that I'm my own runner.

I laughed with the guys when I saw that FloTrack wanted to interview me. I knew it was going to be about the brothers. I thought it was funny.

When I first started high school, I wasn't used to it. It was kind of rough. I felt like I was running to be a replica of Sean, almost. But then after my sophomore year, he graduated. That year, we won cross country states with his help. We won mainly because of him. He led us.

Then my junior year, he was gone, and I led the team. No one thought we were going to win the state meet, and we did win. I thought then, "I am my own runner, I can do great things." We won without him. So that was a major moment that helped boost my confidence, and it's carried over the last four years.

By the time Brandon got there, I had been used to the comments for two years and could laugh it off. I just tried to help him the best I could with my experience of people saying those things.

The joke my senior year, when Brandon was getting really good, was that I never wanted to race him head-on in the 800. We raced one race, it was a mile. We were together at one point in the race and I just thought, "I can't lose to him."

And it's been a joke with Sean that I never beat him in a race, except for one time when we were little kids. We were racing to a tree at our house, and I beat him to that. I never let that go. I always say to him, you can run a 3:53 mile, but I've beaten you.

Do you think you could beat Brandon in a mile right now?

The 800 with Brandon and Sean would be exactly like Dogwood with Drew [Hunter]. Brandon would go out hard the first 400, and that would be a shock to Sean's system, but I think Sean would hawk him down and be able to get him. Brandon would be leading at 600, though.
Are you a better student than your brothers?

My dad always jokes that I'm the more creative and funny one, so I like that. Sean's the smartest and the fastest, so that's kind of a bummer. But I would say that I'm more creative.

My dad was a big help with making me realize that it doesn't matter what they've done, that I'm my own person, and I'll do great things as well.

What do you want to do after school?

We have a joke between the brothers that we're the Pineapple Bros. We're big fans of pineapples and have pineapple shirts. We joke around with that a lot. When we would drive to meets together, we would listen to Kevin Hart. And he has this one skit where he uses that as a code word. ​

​If Sean is the fastest and smartest, what do you trash talk him about?

Humor, maybe girls sometimes. He's equally as successful as Brandon and me in those departments, but I like to joke that I'm more successful. The go-to joke is that if Sean says a joke, I'll be very sarcastic, like "Wow dude, that was really funny."

Which two brothers tend to gang up on the third brother the most?

We never really gang up on each other -- well, Brandon and I against Sean, actually.

This summer, I went out to Stanford where Sean and Grant [Fisher] were training for the Olympic Trials. I was with Sean, Grant, and Jack Keelan for four weeks. I got good training with them and worked really hard with them this summer. So I'm excited to see where this season goes, based off my summer training.

Our team has been looking really strong. Our workout today was insane, and the entire top five was together.

I'll probably stay focused on the 1500. I'm not a massive fan of the longer distances.

There's always been a joke with our dad that we'd make a DMR. Sean would run the 1600, I'd run the 1200, Brandon would run the 800, and my dad would run the 400. He'd maybe be able to do like a 70. He did the pole vault and decathlon at North Carolina and made the Olympic Trials twice. All of us went the running route like my mom; none of us did the decathlon like my dad. He tried to get us to, but no one really wanted to do it.
Tweets by milestatdotcom