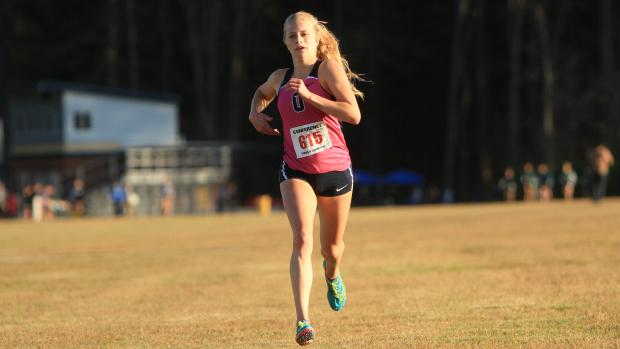 When you think of girls on #TeamVA, you think Murphy, McArthur, Davidson, Holt and now maybe Northcutt and Tolarchyk. There's one name that probably doesn't come to mind, but maybe should…Ocean Lakes senior Madeleine King.
Madeleine King's Athlete Profile
This past week Maddie won a fourth consecutive 6A Conference 1 title (2013-2016), a feat that is not accomplished by many runners, regardless of gender or conference. She followed those wins with consecutive 4th, 1st, 2nd, and 5th place finishes in the 6A South Regionals. Her top State finish came in 2014, at 8th place.
This season, her senior year, she took the conference win with her fastest conference course time, 18:24, just 00:01 off her career 5k PR, which she ran at the MileStat.com XC Invitational just two weeks ago.
With the abolition of the conferences as they exist now, it appears that King and McArthur are the only two cross country athletes who will ever be able to claim four consecutive conference titles. It's also interesting to note that the two of them have gone/will go head to head in three out of the four years that they competed against each other. McArthur did not compete in the 2015 regional or state competition due to injury.
Maddie has one race left in Virginia to prove her ranking in the upper portion of TeamVA. That last race will be on November 12 in the 6A State Championship at Great Meadow. King is working hard to leave her mark on Virginia Cross Country, in the Ocean Lakes record books, and as a legacy to her little sister, Meredith, who is a freshman on the OL team.
Maddie has made visits to Cornell University, University of Florida, Boise State University, Clemson University and Ole Miss. We'll know soon where she'll continue her education and running career. In the meantime, we have two seasons, indoor and outdoor track, to watch this hidden gem run the ovals.
Here what Maddie had to say during the Blue Ridge Running Camp this past summer.