Saint Catherine's senior, Eryn Carlisle woke up ready for history to happen at the VISAA State Championships this Saturday in Richmond, Virginia. The weather was perfect and her form was looking strong as she entered already a two-time state indoor champion in the triple jump.

This was her meet though. All season she had been jumping very well including improving her outdoor pr to a solid 37-3.25. Over a foot improvement on last year's best mark. It was looking good and the wind was ideal for her attempt to not only win her first outdoor state championship but to also help lead her teammates to their first team outdoor title in three years.

Unfortunately on her first attempt of the finals the worst outcome happened to the Saint Catherine's Team Captain. Eryn Carlisle overstepped slightly, slid on the board, and went airborne. She twisted in the air but apparently it was evident from the second that it happened that something was very wrong.

According to eye witness coaches, her leg was almost twice its normal size already in the air after the slide. 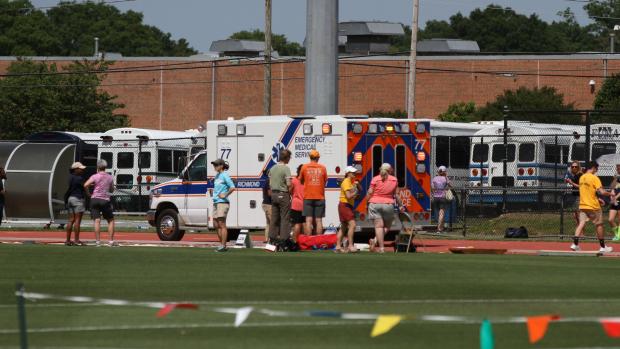 Thankfully coaches and the trainer were close by as well as her sister and parents. They were able to keep her still and get EMT's to the track side in short fashion. After administering drugs to ease the severe pain they were able to move her to a stretcher and bring her to the hospital.

She was taken to St. Mary's Hospital in Henrico (VA) just down the road. Her injury seemed to be a dislocated hip and broken femur.

She finished 11th in the long jump earlier the day and finished 2nd in the triple jump final due to scratches but was the top seed entering and likely would have won the competition as she lost by just .25 inches.

Send your well wishes and thoughts on twitter to @MileStatdotcom and @StCatherinesRVA.