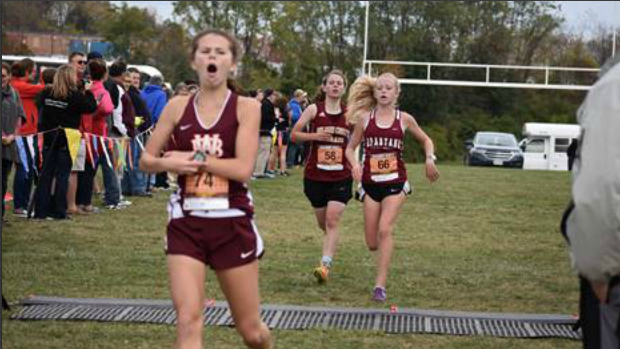 As of 11/3/17, appeals have been filed and the question remains: Will photo evidence overturn the places and send William Byrd to the state meet?

In the 4A Region D championship things were close for the final team spot to the state meet in one week. Blacksburg dominated the meet with 21 points and perennial 4A powerhouse Jefferson Forest was a solid second with 43 points. Third and fourth place though is where things got dicey.

Currently, the scores stand at 113 to 114 with Pulaski leading William Byrd and currently headed to the state meet. Today, though, we were made aware by meet management that there was an appeal in progress to decide who will make it to states. 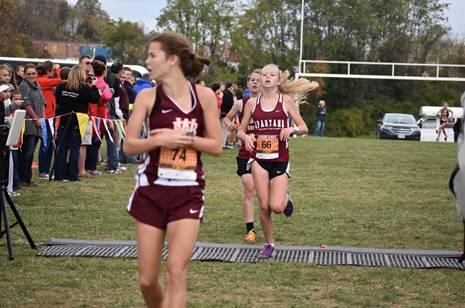 In the second photo, it appears from this angle that bib No. 66, Salem's Anna Pitts, was ahead of Nall at the finish. The results, though, read differently and the reason could be due to timing.

At this meet you can see bib tags were used as chips instead of foot chips. This gets you a reliable time, there's no arguing that, but the issue here is it may have picked up one athlete .10 second or less faster than another causing a switch in places.

This change would drastically affect the team scores and individuals making it to the state meet. If the scoring was changed, William Byrd would make it to the state meet and Pulaski would not. This is because Pulaski would gain one point here and that would tie them with WB. It would then go to a tiebreaker which William Byrd high school would win with their sixth runner finishing 37th to Pulaski's 53rd place for sixth.

The rules in XC timing are pretty simple...

ART. 2 . . . A competitor finishes a cross country race when the torso of the runner breaks the plane of the finish line when using hand- or picture-based timing systems. (Figure 7, Diagram of Chute)

In this case bib transponders were worn and recorded. They have Pulaski beating out Salem and thus by the book are the official results.

Should the results be overturned? What Should be done?