Her times of 6.94 and 38.74 are also good enough to beat nearly any other former state champion aside form Alyssa Aiken, Francena McCorory, LaTosha Colander or Lauryn Ghee. That is some rarified air.

That brings us to the next point and arguably the more impressive point for her to prove. 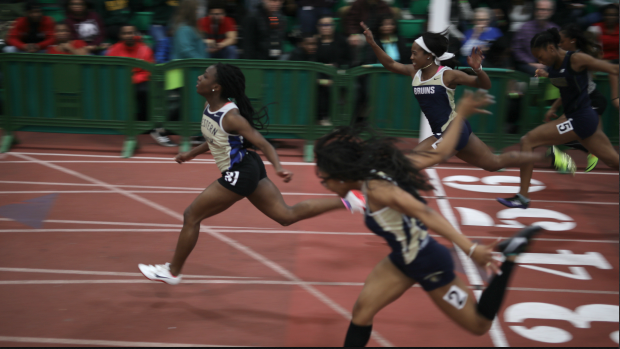 That year the meet was held at George Mason and can widely be considered an off year for 757 athletes. Those times were fast enough to win by a photo finish in the 55 and by .05 in the 300 and rank as the slowest time and second slowest time to ever win at states.

Now we aren't saying athletes from NOVA aren't fast, quite the contrary when you look at the all-time list, but we are saying that thus far speed has not translated to winning at Boo Williams for Northern Region athletes. We aren't sure either what causes this phenomena. Maybe it's the familiarity with the facility or maybe its the travel factor; whatever it is though, it is a strong force that will need a superstar to overcome.

Hannah thus far has shown every sign that she is the superstar to take down the entire state and 757 in the 757. Her biggest competitors though will be doing everything they can to not let the streak end. The biggest of those being Western Branch's Shadajah Ballard. Ballard owns a 6.99 PR and is the defending champ who for two years in a row has PR'd at the state meet. By that logic she should run 6.98 or faster.

The only other two athletes in the hunt this year to our eye are Nyla Ward of T.C. Williams and Na'Taja Ballard of Western Branch.

One of the biggest things to know heading into this meet though is that Hannah Waller has yet to face tough competition all year. Whether this was on purpose or not, she has yet to face a single athlete who could push her in either the 300 or 55m dash. Only in hindsight will we know if this hurt or helped her prepare for this epic showdown at Boo.

Who do you think will win the Girls 6A 55m Dash Title?