Starting the MileStates week off on a big note will be the 2A (1A/2A Combined) State Indoor Championships. This year's meet will once again be held at Roanoke College's Indoor Track. Favored to win the team titles this year are The Maggie Walker Girls and the trio of Auburn, Maggie Walker, and Patrick Henry on the guys' side.

These team competitions will be very different but will feature something very similar, talented athletes.

On the girls' side of competition there are three ladies that will likely be the stars of the show and will all fight for athlete of the meet honors. These three superstars are Mary Caroline Heinen (Maggie Walker), Emilie Miller (Wilson Memorial), and Talasjah Weathersby (Galileo). Combined these athletes are slated to score 78 points. 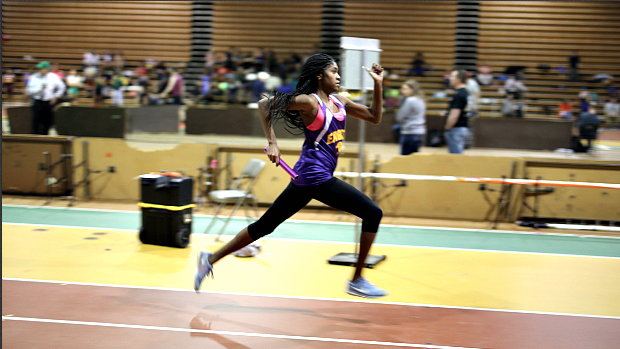 In the relays on the girls side Prince Edward should be the biggest winner with the fastest 4x2 and second fastest 4x4 entered. Maggie Walker has the top seeded 4x8.

One of the highest quality performances of the meet could be from Caeley Glisan in the high jump. The Marion senior is seeded at 5-5. If she were to clear that height she would equal the meet record set back in 2015 by her former teammate Mara Briggs.

And finally the closest event will certainly be the girls' shot put competition. Though all 18 girls have a chance at taking home the title, the two top seeds have the best chance and are separated by just 2 inches. That is a difference of just .44% different between Michayla Boyd's 36-7.5 and Tehya Friend's 36-5.5.

Aside from these guys there are countless guys slated to score a whole lot of points. Some of these include athletes on relays as well. Relays that should be very excited and highly unpredictable. It is also worth noting that unlike almost any other classification, the 2A relays are all favored by different teams. The 4x2 being favored by Patrick Henry, 4x4 by Radford, and 4x8 by Maggie Walker.

The highest competition event might be a tie between Clint Gault in the 1600 or Josh Fischer (Parry McCluer) in the shot put. Both events could see the state meet record fall.

Finally the closest event will be the 3200 between Olive Wilson-Cook, Nolan Harris, Adam Sachs, and Colin Henry Stevens. Those guys were first, second, second, and fourth at XC States meaning it should be an exciting sub 10 race this weekend.