For a team best known for its star runners, there was a twist of irony for Hampton's Bethel High on Friday's first day of the 5A girls state championships. Standing in the middle of the track oval at the Boo Williams Sportsplex on Friday afternoon, the uniqueness of her team's Day 1 team lead was not lost on thrower Indya Hansley.

"It's funny that the field events are getting us (so many) points so far," said the junior, whose personal-best shot put of 37 feet, 8.5 inches was good enough to bump her up from the sixth seed to second place. With fellow 11th grader Jalani Davis winning the event with her throw of 39-3.5, the Bruins tacked on 18 key points to their team total and vaulted to the top spot in the team standings, which held up for all of the first day.

In the Friday morning session, senior Jailyn Raines cleared 5-4 to place second in the high jump, giving Bethel a total of 26 points, nine ahead of second-place Stone Bridge after the fourth of five events to conclude on Friday. Bethel did not have a relay in Friday's fifth event, the 3200-meter relay.

Amazingly, both Davis and Hansley are just getting reacquainted with throwing on a full-time basis, having just concluded their girls' basketball season last week.

"We only threw in two or three meets before this," said Davis, noting that her best throw of this season, 40-5.25, came at last month's Virginia Showcase in Lynchburg. "I got past 36 (feet) at the first Peninsula District meet," added Hansley.

While Hansley was happy with her throw, Davis was less than pleased. "I was hoping to throw 43 (feet) today."

Lost in the mix of conversation was the part about two thrower teammates finishing 1-2 at States with less than a month of serious practice in their event.

Davis and Hansley are frontcourt partners and starters for the Bruins team which finished 10-12 this season. Hansley, at six feet, was the Bruin center, while Davis, perhaps an inch shorter, alternated between the 3 (small forward) and 4 (power forward) positions.

So how do two athletes place first and second at States without regularly practicing? It's all in the give and take. 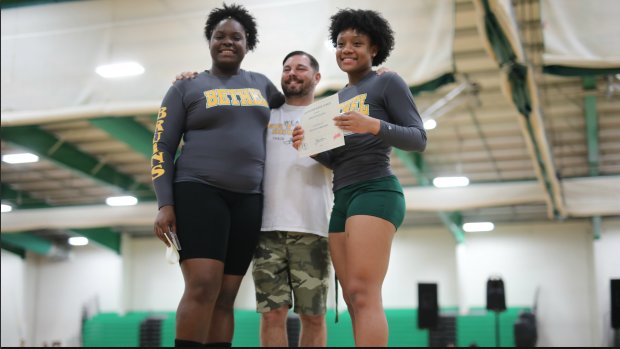 "We did have the last two or three weeks to practice (throwing) every day," said Hansley, whose runner-up throw of 37-8.5 was more than a foot better than her previous best of 36-6. But the two say there are other factors, and that each sport helps the other one.

"Conditioning and being in the weight room for basketball helps with track," said Hansley. "But throwing the shot put helped me with building aggressiveness. A lot of the football guys come out for track, especially the seniors."

Both athletes agreed that shooting free throws helped with determining the proper projectory for lofting an object. But mostly, it's all about the cross-training.

The work is paying off. Davis, who will throw at the New Balance Nationals in two weeks, has been "getting a lot of interest" from colleges, while Hansley noted Towson and UNC in particular as schools that have reached out. Expect many more to send correspondence to Big Bethel Road in the next year.