Winning a state title is a big deal, no matter what level or event. It is something that just a few people do each year and something that will stay with them for their entire life. To win that title you must be tough, resilient, and brave enough to put it all on the line with a strong chance of failure. That is what Henrik Anderson did his entire high school career. For four years he worked day after day for just one goal.

Today though marked a change, today he woke up as a state champion. His hard work and resilience had paid off.

Henrik Anderson, a senior at Mountain View, entered high school as an already strong athlete. During his sophomore year that was very evident with him running 2:30 in the 1K and 1:58 in the 800. Unfortunately that year did not end as he wanted. He finished third indoors in the 1K and then collapsed just meters before the line in the 4x800 outdoors. He would be the first one to say that coming that close and failing was brutal and its' effect on him was evident.

That all changed this year. From the start of Blue Ridge Running camp it was clear that he was a new runner and had a new mindset. He was going to pursue being great and not chase titles. Race after race he improved and he ended his XC season on a high note finishing 2nd at States.

Indoor track season he continued that trend and progressively improved without the added weight of personal pressure to win.

This Saturday was his day. He finished second in the 1600 in 4:25 and used that to add just enough fuel for him in the 1K. In that 1K, against some tough competition, he used what he had learned from the other races and made a decisive move at the perfect time. That move catapulted him into the lead as the bell rang.

As any state champion would tell you, in that final lap you don't have time to think but all you do is think about winning, about all the hard work, and about not thinking. You drive and push with everything you have. 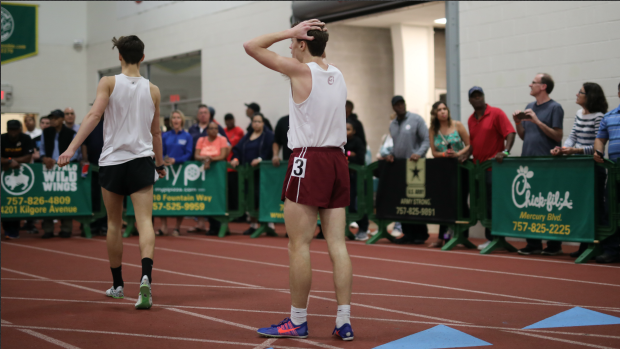 Henrik then crossed the line in sheer disbelief. First he put his hands in the air out of shock. It was the time, 2:30.67, that shocked him most. Then the realization set in and he hit the ground in tears, he had finally achieved his goal. It was refreshing to see someone care that much about a state title and you couldn't help but be happy for him.

Though this is a big step for Henrik and many others, it is fortunately just the start. High School is only the preamble of his and others' athletic careers. The thing they share in common though is learning from mistakes and missteps and capitalizing on them to make them better. Saturday though, he was the best in 5A.