Cason Gardner of Atlee eyed the bar as it stood on its two standards, six feet and nine inches above the synthetic surface of the high jump pit at Todd Stadium.  While others sweltered in the heat around him, Gardner maintained his cool for 15 seconds before hurtling his tall frame toward the bar, leaping off his right foot, spinning and bending backward into a Fosbury flop as his torso sailed over the bar, only to clip it with both of his hamstrings on the way down toward to the blue mat behind the south goalpost of the stadium.
Miss.
Rather than funnel more energy into repeating the same process, Gardner decided to call it a day after one jump, and with that decision, completed his 5A state-winning performance with a best jump of 6-8. With the win, Gardner added a high jump outdoor crown to the one he won during indoor season.
While others might have tried again to aim for a personal best, Gardner's mind was focused more on his Atlee squad. Speaking after the event, the George Mason-bound senior explained his reasoning.
"I have a lot of pain in my shins. But I'm going to do everything I can for my team," said Gardner, who earlier in the day had been eliminated from the 110-meter hurdles, but would be facing the long jump, 400 and 4x400 meter events the next day. "I think we're in the running, and I can't wait for tomorrow." As he looked hyped up, the next question dealt with how he would be able to maintain an even keel through Friday night into Saturday morning.
"My coaches. Robert Lewis, Scott Crow and Tyler Bush are able to calm me down, and get me back into (focus). They were there today when I missed 6-6 on the first two jumps. I wouldn't be here without them. I have to thank my coaches, and they'll help me get a good night's sleep."
Gardner held his own on Saturday, placing fourth in the long jump (23 feet) and 400 (49.28). Finally, to end the day, Gardner anchored the seventh place Atlee 4x400 relay to a time of 3:26.04, cementing a second-place team performance for the Mechanicsville school. 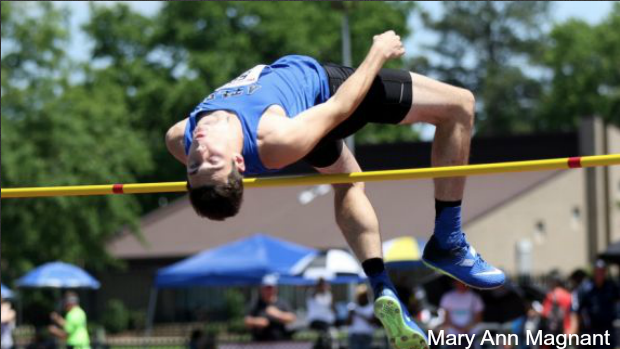 Gardner's versatility, while accounting for 21 of the Raiders 52 points, will continue to benefit him as he prepares for college at GMU. His next challenge at competing over two days will take his talents to the extreme.
Asked what event the coaches at the Fairfax school would have him focus on, he gave a surprising answer. "The decathlon." Mason has a history of successful decathletes, dating back to Olympian Rob Muzzio in the 1980's and including current athletes Josh Grant and John Seales.
It wasn't necessarily the opportunity to compete in ten events over two days that drew Gardner to GMU.
"It felt right," said Gardner who is presently aiming to major in pre-med or biology, but definitely "something that helps people recuperate and requires a doctorate." He had drawn interest from West Point and UNC, but was quickly attracted to George Mason.
"I went on my official visit, and it was amazing the friends I made just in the 48 hours I was there. It's a family that I can't wait to be a part of."
He also credited assistant coach Kevin McGorty as being instrumental in the process. "(McGorty) made it the right decision (for me)."
From all accounts, Gardner's choice in schools should a right decision for all parties involved.