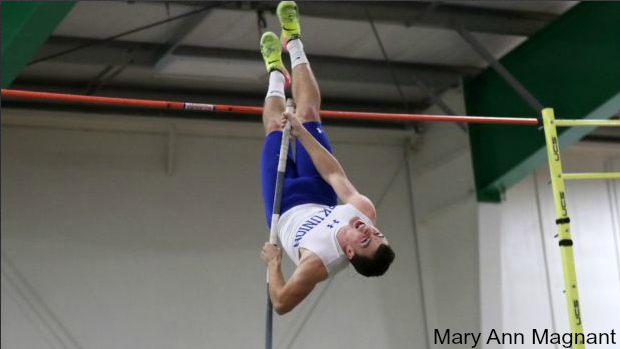 The indoor track invitational season officially kicked off on Friday with the ninth annual Real Deal High School Classic at the Boo Williams Sportsplex in Hampton. This year's version was the largest to date, with 1,535 athletes representing 52 teams from Virginia, Maryland, North Carolina and the District of Columbia registered to compete.

The highlight event on Friday was the boys' pole vault. Fork Union's Will Stupalsky entered the day as the top seed at 15 feet, but the FUMA senior quickly found his competition to be tough as five vaulters cleared 13-6.

Hanover's Joey Badalamenti was the first vaulter to clear 14 feet, but he was followed by Stupalsky, Isaac Grubbs of Lee-Davis, and John Duegaw of Atlee.

As the final four continued preparation, the bar was pushed up to 14-6. Grubbs and Duegaw missed their first attempt. Badalamenti popped up well over the bar, but almost stopped in midair, forcing him to roll off his pole and kick his legs to clear the bar. Although the recording of the effort will not be submitted for an instructional video, it was successful and matched his personal-best.

Stupalsky missed his first attempt, but did clear the second, making him the only other vaulter to clear 14-6, and turning the 15-foot round into a genuine duel of poles.

Both jumpers missed their first two attempts; however, on the third, Badalamenti, who was razor close on his opening attempts, did push his frame over the barrier in what turned out to be the winning jump, and one which tied the meet record of 15 feet set by Griffin Kowal of New Kent in 2016.

After a pair of unsuccessful attempts at 15-3, Badalamenti called it a day.

"I've been working on my upper body strength and approach," said the Hawk senior, who like many of the vaulters in the competition, split training days between their home school and the Aim High Pole Vault Club in Mechanicsville. "I go to Aim High and work with (Coach) Sandridge and (Coach) Bishop three days a week, and then with my Hanover team on the other days," he added.

Although the group has been practicing with Sandridge and club founder Bishop all summer, this was their first meet of the season. Badalamenti will compete with the Hanover team next week, but look for him, Stupalsky, Duegaw, Grubbs, and Northampton's Forest Flynn (who raised his best from 11-6 to 13-0 on Friday) to be together at many invitationals this season.

And keep an eye on the bar. It will be moving up through the winter and spring.