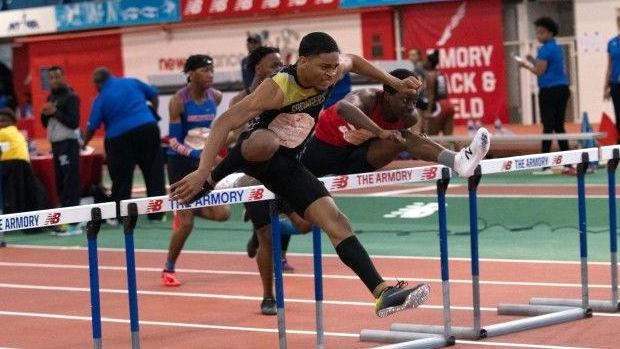 This weekend will be the first high school meet ever to be hosted at Virginia Military Institute's state of the art hydraulic banked track and the long wait with the VTCA Winter Classic on Saturday.

Not once, but three times has a high school track & field invitational been cancelled at the venue over the last 12 months despite great excitement and anticipation. Last year's VTCA event in mid January had to be cancelled due to a winter storm that hit the state that weekend, while two planned high school events last month in December were canned due to logistical issues.

But it was all worth the wait and we are looking forward to covering Saturday's kick off event for high school athletes with the Virginia Track Coaches Association putting on the event at another fast banked opportunity for teams within the state.

Over 1,000 athletes will be competing in the meet representing a select but quality group of 39 teams from Virginia, Maryland, and D.C. There are numerous state championship caliber programs among the list of squads attending.

Would have to the argue that the best part of this meet will be the boys sprints or at least most exciting to watch.  And all these events have deep fields and legit contenders behind them as well.

Keyandre Midgett of Highland Springs is the state leader in the 55 meter hurdles and US #2 ranked in the event with a 7.33 personal best in a victory at the Marine Corps Holiday Classic over the winter break. Midgett might be the best opportunity to witness a new national leading performance at the VTCA Winter Classic as he just needs to shave off a few hundredths of a second to take down the current nation's best 7.31. Patriot's Marcus Wilson with a 7.51 lifetime best will be Midgett's closest competitor after taking runner-up in back to back meets at Liberty University this season.

A win this weekend would have special meaning for Midgett as VMI and Lexington will be his new home for the next 4 to 5 years as he recently signed with the program.

Another state leader in the boys sprints in attendance at the VTCA Winter Classic will be L.C. Bird's Jayson Ward and his 34.43 season best in the 300. Ward is the defending Class 5 state indoor champ in the 500, but he might be starting to turn his attention more to the 300 this winter. He will have plenty of company hot on his tail including 3 challengers on the other side of the Potomac River between two from DeMatha Catholic (MD) in Brian West (34.85) and Kamari Trotz (34.99) as well as one more to consider from St. John's College (DC) in Mordecai McDaniel (35.33).

Along with Bird's Ward, more speed out of Chester, Virginia can be found from Thomas Dale's Chris Tyree led the state last year in the 55 meter dash en route to a Virginia Class 6 title at 6.30 and is the top seed at the VTCA Winter Classic. Recent runner-up at the Marine Corps Holiday Classic in Potomac's Bryan Ahouman with his 6.41 season best should be his closest challenger.

The Highland Springs girls have arguably one of the better sprint crews in the state and that will be on display at the VTCA Winter Classic. They have the top seeded 4x400 and second seeded 4x400 in the meet, while senior Alicia Thorpe is one of the fastest entrants and contenders in both the 55 meter dash (7.21 PR) and 500 (1:17.26).

Hanover's Makenzie Joiner stands in her way as the fastest entrant in the 500 (1:16.62), while the defending Virginia Class 4 state 500 meter champ Joiner is looking to be a double winner in the sprints as well this weekend as the second fastest (41.63 PR) in the 300.

The fast section of the girls 4x400 should be fun with 5 teams entered at 4:05 or faster and all pressing to break 4 minutes for the first time this season. Battlefield has the fastest time of the season at 4:03, but some of these teams have not run a fully loaded squad yet. Highland Springs girls have the fastest season best in the 4x200 at 1:43.

The DeMatha Catholic boys come as the top seed for the 4x200 with a season best of 1:31.96. Only 3 teams in Virginia have run faster than that time this season, but none of them are this meet this weekend, so will be interesting to see if anyone can step up and challenge a DeMatha squad that has two guys on their squad who have run under 35 seconds in the 300.

Also likely why DeMatha has the top projected seed time in the 4x400 despite not loading up the event this season. However, they will have their work cut out for them to get the win with the likes of L.C. Bird currently ranked VA #2 at 3:26.85 as well as Patriot ranked VA #3 at 3:28.29 in the VTCA Winter Classic field with them.

The boys 1600 could see a 1-2 finish between two teammates in L.C. Bird's Jacob Plummer (4:14 PR) and Brendan Taylor (4:24), while the girls 1600 could see two sisters do the same in Hanover's Rachel Crytser (5:00 PR) and Alli Crytser. Crytser is the defending Class 4 state indoor champ in the event. However, Midlothian's Caroline Bowe is capable of breaking up the Hanover sibling duo with her middle distance wheels coming off a recent 2:57 1000 meter PR performance to indicate she might the most fittest currently.

The resurgent of the Midlothian girls distance program under long-time head coach Stan Morgan can be seen not only with Bowe, but Gabriella Garcia as the top seed in the girls 3200 with a 11:13 personal best as well as having the top seeded 4x800 meter relay squad with a 9:53 season best. Garcia is only a sophomore and talk about consistent as she ran a 11:13.46 3200 to open her season at Woodberry Forest and 8 days later won the Commonwealth Games 3200 at Liberty with a nearly identical time of 11:13.53.

There are 13 boys entered with sub 10 minute credentials in the 3200 led by Patriot's Jacob Hamacher with his 9:24 PR, but also have two-time Virginia Class 5 state cross country champ Colby Burcham (9:31 PR) of Deep Run to consider as a legit contender in the race. Emily Morris of Patrick Henry (Ashland) is one to watch in the girls race after winning the CNU Winter Frolic last month in 11:16 personal best.

The boys 1K should be an intriguing race. Harrisonburg's David Beck at 2:31.48 personal best and Louisa County's Bowen Varney at 2:31.82 are two of the state's more proven and consistent runners in the event ranked #3 and #8 respectively. Jumping into the race with them are two runners more known for their excellence at distances of mile and longer in the Western Albemarle duo of Jack Eliason and Joe Hawkes coming off leading their cross country team to an excellent end of season showing at the Nike Cross Nationals. We will find out how much range and led speed those two have after an extended fall season of cross country races.

The Air Force Academy commit Rachel Crytser will attempt to be a distance double winner in both the 1600 and 1000 meter run as the Hanover senior's 3:03.56 personal best seeds her just behind Deep Run's Janie Sanborn at 3:03.02 in the 1K. However, James Madison University commit Mary Milby from Spotswood might be running the best lately out of the bunch including a recent 3:04 PR run at the Commonwealth Games.

David Beck also will be looking to lead Harrisonburg to victory in the 4x800 meter relay as he did last week at the Bulldog Invitational in Lynchburg when they posted the state's second fastest time at 8:12. Battlefield, Deep Run, and Western Albemarle were all entered with times under 8:20. Western Albemarle will be fascinating to see how quick they run if they choose to put Eliason and Hawkes on there as well as others from their NXN squad.

The girls 55 meter hurdles seems to have a traffic jam of girls stuck between the 8.5 to 9.0 second range. Can someone break through about this group and start venturing into the low 8's? Manchester sophomore Jaslyne Robinson seems to be on the right path. She was 3rd at the CNU Winter Frolic to start the season with a 8.75 PR then dropped that time by two more tenths of a second a week later in a 8.54 runner-up showing at the Commonwealth Games.