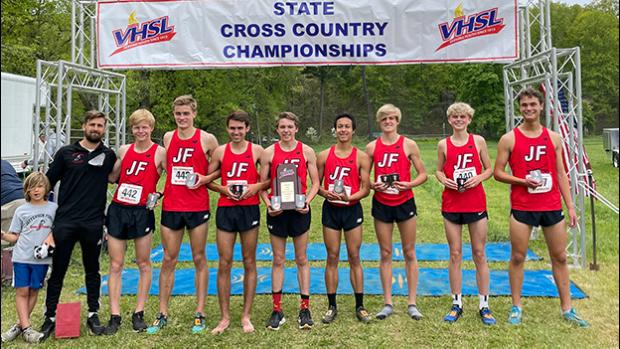 The VHSL Class 4 boys team title battle lived up to its hype and then some on Saturday. It took 5,000 meters, two timing mats, two finish line officials and a finish lynx backup to decide the team title: Leaving the Oatlands course on top was Jefferson Forest.

But Jefferson Forest didn't only win the team title, in arguably the hardest division in the state, but the program did so in the closest state meet ever. Due to its size being eight teams instead of 12, it meant every single position counted nearly double and that it needed to be a complete team effort.

Head Coach Colby Delbene put it perfectly in saying that he knew his team could do this all season; they just needed to put it together all at once.

The entire Jefferson Forest team took that message and their underdog position, most notably not even being mentioned by us in our pre-meet preview, to heart.

On state meet Saturday it was junior Brannon Adams leading his teammates with his 16:39 finish for sixth. His senior teammate Timothy Krone ran 16:59 to finish in an All-State 14th spot. Then came Will Schepens, a senior, in 17th place in 17:08. Just a few seconds back was Alex Jordan who ran 17:18 for 19th. Closing out their top five was Jed Dudley in 24th with his 17:27 clocking.

Finishing in their sixth and seventh spot were seniors Lance Jonzen (17:46) and Buck Arthur (18:18). Had it come down to a tie-break, those points would have still handed them the title too.

Though it did not come down to a tie-break, it was surely close. In fact, as close as it could get. Jefferson Forest won the meet with 61 points but Grafton almost did too with 62 points. Loudoun Valley was third with 65 points and Patrick Henry (Ashland) finished fourth with 86 points.

We dug thru the VHSL record book and only found two instances that were even close to this. In 2010, the AA team title came down to just a point but it was 51 points back to third. In 1997, there was the VHSL's only tie in the A division but third place was nearly 100 points back. That meant this year was hands down the closest in state history.

This is what makes XC States the most exciting one. It took an entire team effort and in multiple spots took just mere seconds to decide this team battle.