The Varsity A Boys Race From Great Meadow

Just like that we are back to "normal" in XC. The annual first meet of the year started with its normal shotgun start and produced some exciting races and times. Below you can find the quick recaps for the races and all the coverage and results from this Saturday's races. The girls a race was an exciting one that featured two of the top three finishers from this past year's (really this spring's) cross country state meet in Sailor Eastman of Battlefield and Gillian Bushee of Herndon. Early on it was those two plus Anna Macon Corcoran of Yorktown, Elizabeth Gregory of Forest Park, and a few others.

We are awaiting the final splits but we can tell you from watching the race that no one wanted to push the pace that hard early on. That pack of about five girls stuck together for the majority of the race with a few dropping back and moving up.

Roughly with a mile to go though Sailor made her move and began putting some distance between her and her competitors. Ultimately she pulled away big by the time she had hit the top of the final hill with an all downhill finish ahead of her for the last quarter mile.

Eastman powered down the homestretch all by herself to run a very impressive 18:02 which ranks 7th all-time on the non-state course and 3rd all-time at the meet. In fact, just Foot Locker Finalist Heather Holt has run faster as a Virginia native at this meet.

Unfortunately, we did have one competitor fall down in the homestretch and not finish and that was Bushee who was near the top of the pack. She was helped across the finish on a cart and was seen by medical officials.

Battlefield won the team competition with 99 points. Tuscarora was second with 105 and Yorktown finished third with 146 points. 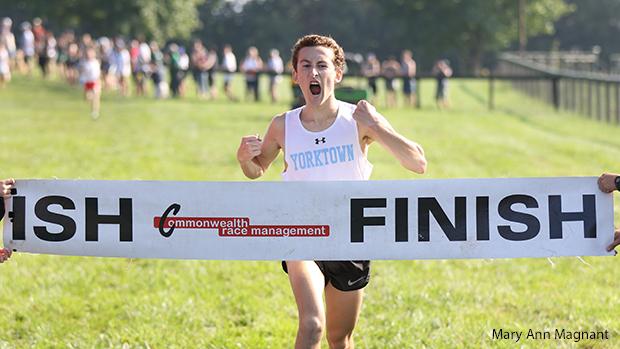 The boys race this weekend was just 30 minutes after the girls race but it felt 30 degrees hotter. That was the exact reason meet management moved up the entire time schedule to beat the heat the best they could. The boys in this "A" race didn't mind the heat though and still produced some fast times.

Similarly to the girls' race, there was a big group of guys fighting together for the lead and quite a few lead changes. Leading for most of the race was Ryan Watson of Justice. He helped push the pace with a few guys in the lead group. Some also made their way up to the lead group right around the halfway point.

It wasn't until they were at the highest point in the race, with about a quarter mile to a third of a mile to go that our winner, Owen McArdle unleashed his kick. He was moving so fast he could and would not be caught. That finish propelled him down to a 16:16 victory. That was a 13 second PR, beating his previous PR set this spring at the state meet, in that race he finished an all-state 6th place.

Ryan Watson of Justice finished second and Hayden Hauser of Colgan completed out the top three.

The Loudoun Valley boys won the team title with 147 points, Colgan was second with 154, and South Lakes was third with 162.