Battlefield's Sailor Eastman put on a show this past weekend at the Great Meadow Invitational with her stellar 18:02 winning performance. Though there were quite a few other great performances, here we just focus on her time and what it means for the season.

When looking at Sailor's performance you have to start with just that, the start. In this race she definitely wanted to make others lead and just relax for the first half of the race. In fact, halfway she was fourth (you can see that on the above video at 2:25) and was absolutely cruising. It seems like even with a heat index close to 90 degrees she wasn't even sweating.

It wasn't until after halfway and closer to the final 1K that she made her move and did so with ease. It was that move that gapped the field and ultimately gave her the victory.

Her final time of 18:02 is significant because of how historically great it is. It is the third fastest in meet history and 7th fastest in course history.

XC isn't just about times quite like track is though. It is about comparisons and projections and what this performance does is show Sailor has the potential to have a breakout season. Though she enters our state-wide subjective rankings at fifth, she truly could be the best and that is saying a lot because the four ladies in front of her are serious D1 prospects. 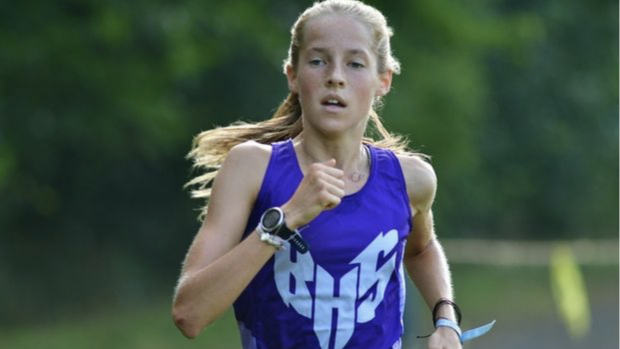 The quickest comparison that comes to mind is Bethany Graham who ran 18:13 in 2019. Bethany ran that race easily and went on to run 17:04 that season. For her that was strategic because she had nothing to prove but for Sailor the effort was likely just as easy for other reasons.

Last Spring, at XC States, Eastman took second as a freshman and did so after leading for the majority of the race. Though it is just speculation, we wouldn't be surprised to hear that her strategy this past weekend was the opposite of that and was to just sit back and then make a move.

Some meets you can get away with that and others you need to have your foot on the gas the entire way. Coming up next for her and Battlefield seems to be Oatlands on 9/11 and then RVA Relays. Both of those races should provide unique challenges and challengers. It will be exciting to see what she does and what strategy she employs.

In those races she will face off with Foot Locker and Nike National finalists but as long as she is relaxed and having fun, the times will come. Don't be surprised though when she moves up the rankings and is once again vying for the state title in November.