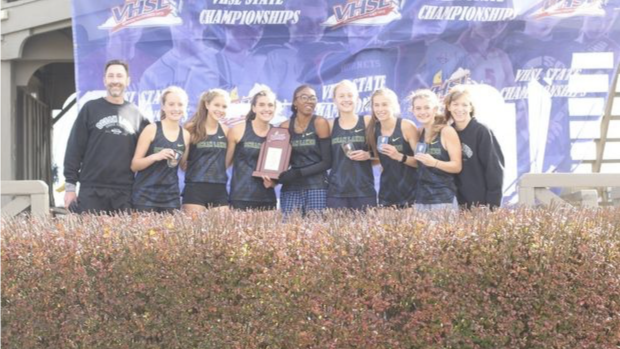 One of the more satisfying aspects of the Class 6 Virginia cross-country team championships was that the same teams that won the spring titles came back to win in the fall.

In fact, anyone who took the victorious performances of the Ocean Lakes girls and Oakton boys at last spring's Oatlands championships as anything other than the benefit of a field weakened by runners who chose not to compete because of COVID fears, found that they ran out of arguments after Saturday.

First, the course was different. After missing the 2021 race because of scheduling conflicts, the championship meet returned from the Oatlands Plantation to Great Meadow Park, its home site since 1994.

Second, most of the normalcy had returned. With three teams qualifying in each region, each race had 104 runners, as opposed to the truncated field of 68 (two teams plus three individuals) from the spring. Competitors lined side-by-side on the starting line instead of dozens of yards apart.

After receiving their team trophy, Dolphin senior Aniya Mosley spoke with a tinge of relief on repeating their title performance.

"Coach (Mike) Nestor told us something that stuck with me," said Mosley. "He said that we weren't defending our championship, but rather attacking it."

Circumstances caused by COVID didn't help the Fins. A travel ban limited the Ocean Lakes teams to meets within 50 miles of the school, thus negating opportunities to run at invitationals such as MileStat in Mechanicsville, or even the Octoberfest Invitational at The Plains, which would have given the team a chance to preview the state course.

Fortunately, for Nestor's team, many seniors had some familiarity with the state course. In the spring, the Dolphins had to utilize an entire day during spring break to drive to Leesburg and run on the Oatlands course since no member of the team had ever competed there.

Mosley had not been to The Plains in two years and experienced a moment of shellshock. I looked around and saw the hill (after the two-mile mark). I had forgotten about that, and we didn't get to run any real hills all season." Most of the Dolphin meets were run at Bells Mill Park in Chesapeake, on a course that features some rolling hills, but no notable upgrade.

As if the travel obstacle wasn't enough, Mosley herself caught COVID late in the season, adding one more obstacle to the championship defense, and making her fifth-place finish (18:36) all the more remarkable. On the boys side, Oakton coach Matt Kroetch was not willing to downplay his team's spring championship to any other factor.

"There were some good teams here," said Kroetch, who has won state championships as a runner and coach for the Cougars. Speaking of potential missing runners helping their last title, he added, "there was better depth in the back this time, but the people who were invested in running were here last spring. My hats off to the kids who trained through this (pandemic)."

The Patriots' Owen McArdle won the individual boys race with a time of 15:45. South County junior Isaac Garcia was second in 15:57, with McLean senior Xavier Jemison third in 15:59.