For most of the participants at last weekend's VHSL Class 5 State Cross Country Championships at Great Meadow, the day after the race -- in this case, November 14 -- was probably a day to ease aching muscles, relax, unwind and reflect on a successful fall season.

For these athletes, the day was light and breezy.

Midlothian's Gabriella Garcia would seem like a prime candidate for the rest and relaxation group. On Nov. 13, she pulled off her second straight win, and the third of her season, defeating 101 other runners to win the Class 5 girls race in 18:55.

Her performance led the Trojans to a second-place team finish.

But as Garcia and her Midlo Trojan-mates made their way to the podium at The Plains to collect their team runner-up trophy, the maroon lapel pins on the seven runners, and matching hair ribbons, suggested that something was special, especially as teammates hugged their best runner in a way that suggested they were not just merely congratulating her for a strong 5,000-meter run.

Instead, they were hugging their senior leader for her inner strength and fortitude.

While many runners utilized the Nov. 14 as a day of rest, Garcia was recognizing an anniversary, a transformational one. Exactly a year earlier, her mother Kathleen passed away after a determined, year-long battle against multiple myolema, a cancer of plasma cells.

"She had been in and out of the hospital since my sophomore year," said Garcia, minutes after exiting the ceremonial podium. "COVID was hard because her immune system was weak, and we couldn't always see her."

Still, her passing came as a shock to the family.

"It happened really quickly, and on the day (November 14) that states was supposed to be. It impacted me greatly," Garcia said.

Making the decision to skip indoor track season may not have come as a surprise to Garcia's teammates, but that choice only covered the depth of her true emotions.

"I lost my sense of self and second guessed what I was doing," said Garcia, who also admitted to developing an eating disorder as she slipped deeper into depression. 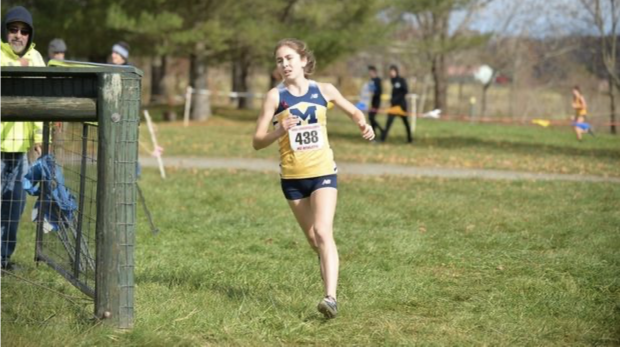 Perhaps it was a blessing that in the last school year, for the first time ever, indoor track started the abbreviated running seasons. As indoor segued into cross country, Garcia began to turn toward the pillars of her life for guidance.

Her mother, as always, gave her daughter the first reminder of inspiration.

"She used to text me," Garcia said, "143," nodding affirmatively when asked it that number represented the letters in "I Love You," and adding "especially during her battle."

Another maternal reminder came in the form of Kathleen's words to her daughter. "She used to tell me to "Enjoy the moments. She was always so positive."

Thinking of her mother, Garcia, with the help of her father and brother, began to focus on the areas of life that brought her happiness.

"After transferring from Monacan (after her freshman year) I had enjoyed the relationships that I formed with my teammates. Running with Midlo is like having 10 best friends and along with Coach (Stan) Morgan and all of our coaches, it is really special here."

Remarkably, Garcia stepped on the cross-country course once again on March 10 and won a Dominion District inter-squad meet in 19:05. She would run two more times, placing second at the Region 5B meet, and third in the Class 5 state final.

Those may have been her most important races, but Saturday's win was her biggest victory. The Trojans' second-place finish didn't hurt either.

"We didn't expect to do that well and gave it our best effort. I am so proud of everyone, even the girls that didn't race."

She also remembered her mother.

"I know she is always smiling down on me. I wouldn't be who I am without her."