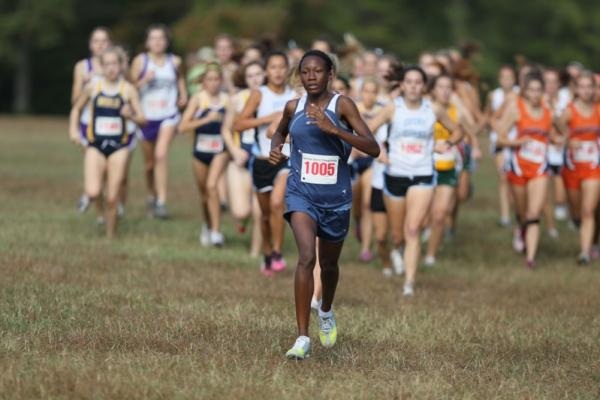 Who is Nichelle Scott? A bunch of people may be asking that question seeing the results from the intermediate girls' 800 meter run finals at the AAU Junior Olympic Games, which has a 2:14 national age group runner-up from Chesterfield, Virginia. We actually caught a small glimpse of Scott's talents in the fall running cross country as a freshmen for L.C. Bird High School when she placed 9th in an always competitive girls' race at the Dominion District Championships (pictured above by John Herzog leading the entire field early).

More highlights to be posted as later event results are posted online from Wednesday.

Intermediate Girls 800m Finals - Nichelle Scott of L.C. Bird is a shooting star on the high school track scene after her national runner-up finish dropping another four seconds off her personal best in the 800 meter run with an outstanding time of 2:14.08. Scott ran cross country last fall as a freshmen for L.C. Bird, but did not run indoor or outdoor track for the Skyhawks.

Young Men 800m Finals - Norview's Marquis Worsley finished 7th in the finals of the 800 meter run with a time of 1:57.51, which is two seconds off his PR from two months ago. However, Worsley might be better geared to succeed in preparation for cross country as well in the 1500 meter run which he will be competing in later this week as a national qualifier. Worsley broke 4:20 in the 1600 meter run at the AAA State Championships in early June, so is capable of running close to 4 minutes for 1500 meters.

Young Women 800m Finals - Indian River's Shannon Morton competed in her second consecutive AAU age group national finals in the 800 meter run, which she wrapped up her 2011 season with an eighth place finish of 2:19.48.

Intermediate Girls 400m Hurdles - Great Bridge rising junior Heather Smith gained valuable experience competing in the finals of the 400 meter hurdles at the AAU Nationals, which she placed 8th with a 1:03.92 clocking.