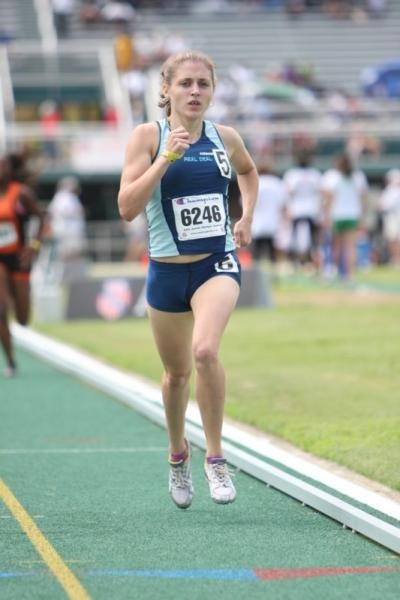 Young Women 1500m Run - Indian River rising senior Shannon Morton (pictured right by Ryan Kelly) chopped 5 seconds off her 1500 meter best to win the AAU age group national title in the young women's division with a performance of 4:39.47. Morton had a late start to her track season due to a stress fracture in cross country, but has finished her junior year off strong as an AAU national champion. Morton also posted a 800 meter PR in June at the AAA State Championships with a 6th place time of 2:13.21. Morton may be featured in the mile more in her senior year after her AAU performance, which converts to a 1600 meter time of 4:59.

Young Women 4x400m Relay Prelims - The All-Star lineup for the Five Star Track Club on their young women's 4x400 meter relay was head and shoulders above the rest in the prelims as their 3:42.96 performance was nearly four seconds faster than the next fastest qualifier. Five Star might go after the AAU age group national record of 3:40.80 set in 1990 by a track club from Philadelphia. Their relay features three members from last year's AAU national champion squad in Riverbend's Erin Edmond, Tabb's Kiara Porter, and former Great Bridge athlete Shakeela Saunders. The rest of their relay pool includes Bethel's Rashaun Combs, Landstown's Tanisha Greene, and Lafayette's Krista Ferrell.

Intermediate Girls 100m Hurdles Finals - Not the best of showings in the finals for the two Virginians in Landstown's Leah Lott (6th, 14.83) and Hampton's Chantel Ray (8th, 14.98) as the race was dominated by Kendell Williams from Kennesaw, Georgia in a 13.66 victory despite a -1.3 headwind.

Intermediate Girls Shot Put - Battlefield rising sophomore Galissa Cause just missed All-American honors in the shot put with a ninth place mark of 35'10". Cause was a Northwest Region champion this past spring in the shot put and earned All-State honors at the AAA State Championships.

Young Women 200m Dash Prelims - Western Branch's Taranisha Taylor, who made it to the second round but was unable to make the finals of the 100 meter dash earlier in the meet, was able to crack into the final 8 in the 200 meter dash. Taylor clocked a time of 24.60 (7th fastest overall) in her heat on Thursday, which is not far off her personal best of 24.39. Also dipping under 25 seconds in the semi-finals was Group AA state champion Kiara Porter of Tabb, who posted the 13th fastest time at 24.85.