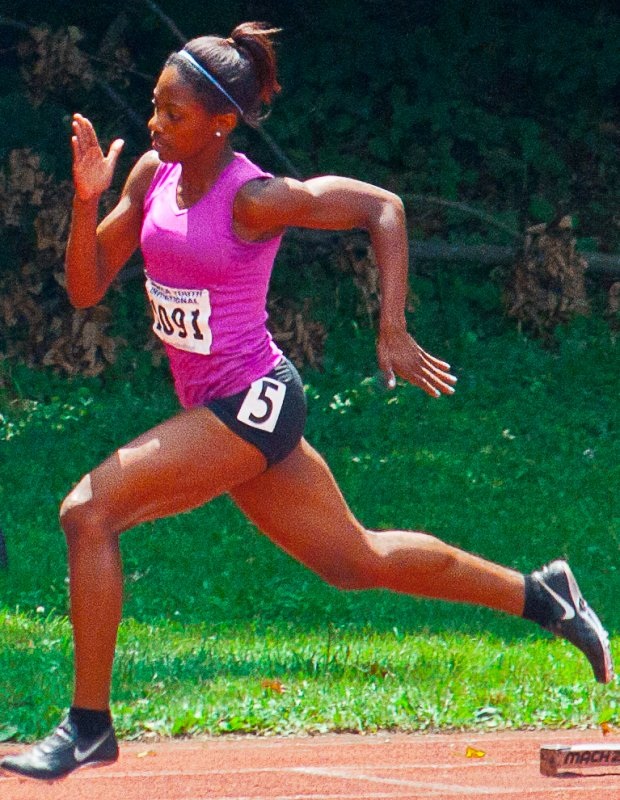 Young Women 400m Prelims - Briar Woods rising senior Shaquera Leach continues to drop her 400 meter time over the summer. Leach had never broken 58 seconds until the AA State Championships in June and in only two months, she is now knocking on the door of breaking 55 seconds. Leach, who broke 56 seconds in late July at the Russell Blunt Invite for the first time late last month, put together an exceptional preliminary race in New Orleans to roll out another impressive PR at 55.05. Leach will the second fastest qualifier in the finals.

Young Women High Jump - Cheslea Utley of Green Run capped off her stellar high school career which included state titles and All-American honors with the last thing eluding her in a national championships. Utley won the young women's high jump title at the AAU Junior Olympic Games with a clearance of 5'8". Utley will be headed next to Texas A&M University in the fall. Another former Beach District athlete in First Colonial grad (2010) Teiara Denmark added her second All-American honor from the meet after winning the triple jump with a third place clearance of 5'6".

Young Women 4x800m Relay - Five Star Track Club showed it athletes have range beyond the sprints with a 4x800 meter relay consisting of many athletes who rarely race above 400 meters winning the AAU national title by 9 seconds with their final time of 9:42.38.

Young Men 4x800m Relay - Norfolk Real Deal boys got a relay team on the podium in the high school age group with their 4x800 meter relay team dipping under 8 minutes with a solid time of 7:57.03. Their relay team lists as many 8 potential legs, but certainly Marquis Worsley of Norview ran a leg after making the finals of the open 800 earlier in the meet. Another relay leg in Western Branch hurdler Antonio Foster, happens to be the grandson of Kermit Foster, who arguably has been the greatest ambassador for youth track in the Hampton Roads area for years.

Intermediate Girls 400m Prelims - Thomas Dale rising junior April Wilson will be moving onto the finals after a solid opening performance of 56.34 in her preliminary heat, which seeds her as fourth fastest in the finals. Earlier this summer at the AAU district qualifier, the 2011 Central Region runner-up Wilson ran a personal best time of 55.85. Another rising star from Chesterfield County, L.C. Bird's Nichelle Scott, who earlier finished second in the 800 meter run, ran a time of 57.23 in the 400 prelims which was good enough for 13th fastest.

Young Men 400m Prelims - Woodrow Wilson senior Kenneth Williams had to a sweat out to find out if he had made the finals of the 400 meter dash as his prelim time of 48.66 ended up being only one hundredth of a second faster than the ninth fastest performer in the first round to secure his spot in the finals. The fastest qualifying time of 47.79 is actually slower than the personal best and state leading time of 47.39 which Williams ran at the New Balance Outdoor Nationals, so Williams certainly is capable of contending for a national title with a better race in the finals.

Young Men Javelin Throw - An impressive feat from Deep Run's Aaron Wells. Without being able to compete at all in the event during the high school season since Virginia does not allow the javelin to be contested, Wells was still able to place fourth at the AAU Nationals with a deep throw of 155'7". Wells is a modest level thrower in the shot put (37'8") and discus (116'5"), but apparently becomes a national caliber thrower when it comes to the javelin.

Intermediate Boys 400m Prelims - Oscar Smith's Michael Cherry was only six hundredths of a second off from advancing onto the finals in the 400 meter dash after winning his heat with a 49.37 clocking. Cherry will be one of the state's top returning quarter milers next year as well as for 2013 as a rising junior. A Group AAA All-State performer, Cherry earlier this summer ran a personal best time of 48.30 at the AAU Club Championships.

Young Women 4x100m Relay Prelims - Two relays from Virginia will be part of the 8 teams in the finals as the bragging rights will be on the line between the Norfolk Real Deal (46.14) and Five Star (46.82) track clubs for the fastest All-Star relay of the best in the Hampton Roads.

Intermediate Girls 4x100m Prelims - After just squeaking into the finals of the 4x400 meter relay only the day before, the Five Star Track Clug girls were on the outside looking in for the 4x100 finals as the ninth fastest relay in the prelims at 48.16. Their 4x100 relay was comprised of several members from their 4x400 meter relay including three athletes from the Southeastern District in Grassfield's Britnee Perry, Great Bridge's Heather Smith, and King's Fork's Gabrielle Snipes. The Norfolk Real Deal 4x100 posted a nearly identical time at 48.19.