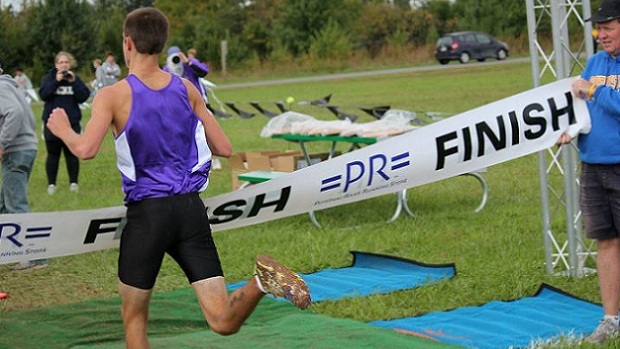 Sean McGorty and the Chantilly boys did not slow down at all this weekend at the Glory Days Grill Invitational. Chantilly tallied a low team score of 58 points and finished well ahead of one of the pre-season favorites in the Northern Region, VA #12 James Robinson (2nd, 105 pts) and other top 15 ranked squads in Virginia, #9 Loudoun County (3rd, 140 pts) and #15 Osbourn Park (4th, 155 pts). Ranked recently #3 in the state of Virginia, Chantilly looked the part with Sean McGorty and Logan Miller dominating up front for the Chargers with their second straight 1-2 finish in a major invitational. McGorty cruised in with a season best time of 15:28, while Miller held off Maymont Festival champion Patrick Joseph (3rd, 15:39) of Loudoun County for second place in 15:38. Chantilly had two others place among the top 20 and break 16 minutes in Faris Sakallah (9th, 16:25) and Peter Malander (20th, 16:45), while Andris Sturans (34th, 17:06) rounded out the team scoring for the victorious squad.

James Robinson had a solid front three in Patrick Spahn (5th, 16:12), Nathan Schulte (14th, 16:35), and Luke Sharkey (17th, 16:42) to take runner-up honors. Despite being a distant second to a team on the rise in Chantilly, Robinson did finish well ahead of other Northern Region squads expected to contend for state meet berths in Thomas Jefferson (6th) and West Potomac (9th). The Loudoun County boys often have had to run behind and in the shadows of their Dulles District rival Potomac Falls over the years, but this year's group looks not only capable of knocking Potomac Falls after defeating them at Glory Days, but will be in the contention for a top three state meet finish in Group AA.  Other familar rivals seizing each other up at Bull Run Regional Park on Saturday were Cardinal District squads Osbourn Park and Forest Park, who both will be competing for state meet berths in the Northwest Region this fall. Osbourn Park was able to squeak just by Forest Park with only two points separating the two teams from fourth and fifth place.

Monacan senior Kaila Blackburn had yet to race at her top form this season in earlier races at Pole Green, William & Mary, and Maymont, but definitely showed she is rounding into that shape on Saturday in pulling out the victory against a competitive race and finish from James Robinson sophomore Macey Schweikert (2nd, 18:31). Blackburn, who finished her outdoor track season with a 3200 meter personal best and All-State performance of 11:03, is working towards her 5K PR of 18:08 this fall and on the right track after her 18:29 clocking at Glory Days. She defeated higher ranked runners in Washington-Lee's Isabel Amend (3rd, 18:41) and West Potomac's Sarah Jane Underwood (4th, 18:57), who also dipped under 19 minutes in the race.

Underwood led the West Potomac girls to another invitational team title to keep their team undefeated this season after earlier victories at Monroe Parker and William & Mary. With 54 points, West Potomac had an impressive five runners fit inside the top 20 places including Underwood, Dale Lescher (7th, 19:20), Katie Genuario (15th, 19:57), Sophia Passacantando (19th, 20:04), and Colleen Boye (20th, 20:06). West Potomac is quietly going about their business so far this season, but is a team to take seriously to make noise in championship season to contend for a state meet podium spot.

Following their runner-up showing at the Oatlands Invitational, Osbourn Park pulled in another runner-up finish at Glory Days with 84 points. Brandy Wybersky (9th, 19:34) and Kelly Russell (11th, 19:35) came in together to lead the Lady Jackets while only a minute spread separated their remaining top five. Thomas Jefferson girls bounced back from a poor showing at Oatlands to garner a third place finish on Saturday, while the Chantilly girls have been almost as big of a surprise as their boys' team with their success this fall and took fourth at Glory Days.