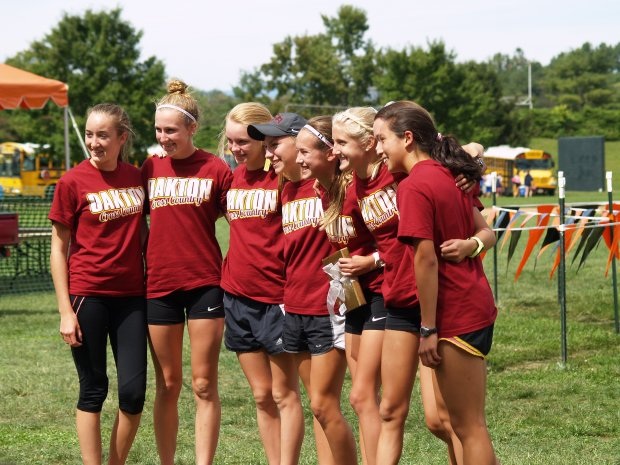 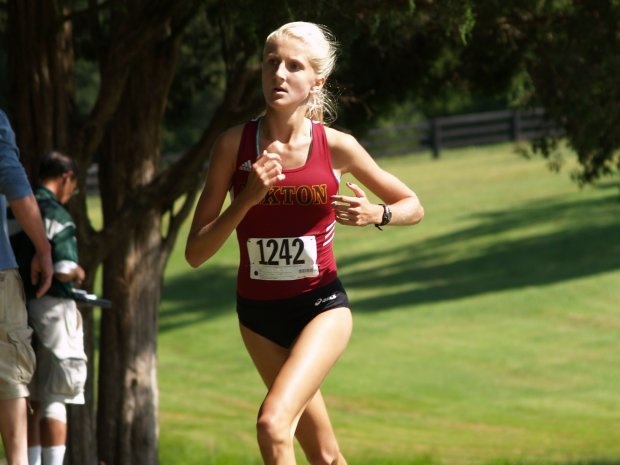 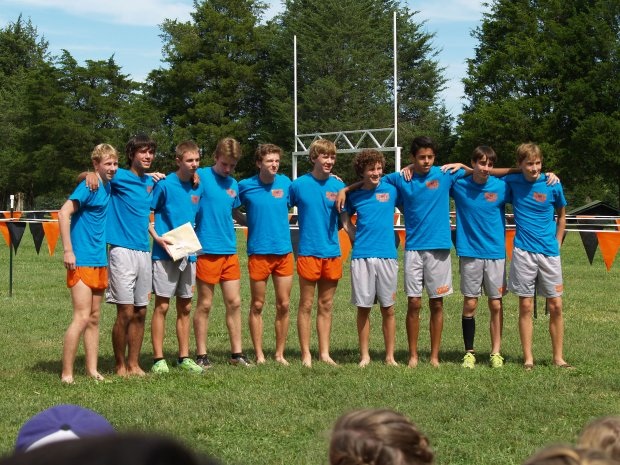 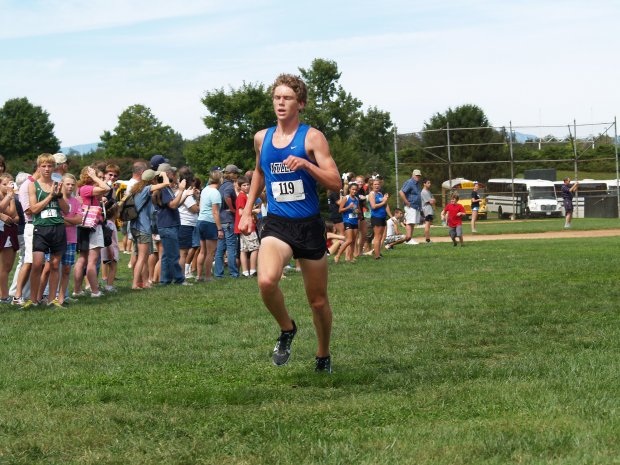 This year's Woodberry Forest Invitational found an even more competitive meet than recent years with a field consisting of just under 50 schools. The featured team in the meet was the VA #1 ranked Oakton girls, who put on a dominant show with five of the top 11 finishers in the varsity race to put themselves well ahead of Group AAA #13 ranked Atlee (119 pts), Group AA #9 ranked Brentsville (3rd, 173 pts), Group AA #7 ranked Fluvanna County (4th, 192 pts), and private school #1 ranked St. Catherine's (5th, 194 pts). The Lady Cougars were led by sophomore Allie Kimkiewicz, who after being held back from pushing the pace early in her first race of the season at Chancellor, was let loose at Woodberry Forest to run away from the field by nearly a full minute with her final time of 19:14. Trailing in 59 seconds later after the VA #8 ranked Klimkiewicz was the private schools #3 ranked runner in St. Anne's Belfield School freshmen Madison Hunter as the runner-up at 20:13. Four of the next nine places belonged to Oakton runners with Hailey Dougherty (4th, 20:26), Kara Kendall (5th, 20:27), Kristi Carrigan (7th, 20:42), and Maryn McCarty (11th, 21:04) for their team to compile a low team score of 24 points.

Oakton finished well ahead of several teams who will likely be competing in the state meet this fall between Atlee in Group AAA and Brentsville District and Fluvanna County in Group AA as well as the current favorite to win the Virginia Independent Schools state title later this season at Woodberry Forest in St. Catherine's. Brentsville and Fluvanna County could also be in contention for the Region II title, which Saturday was their first head to head match-up of the season with Brentsville getting the edge by 19 points despite Fluvanna having three finishers in before Brentsville's first runner in Nick Douma (6th, 20:37), Devon Burger (10th, 21:01), and Stephanie Bossong (12th, 21:06). Brentsville had a better pack and tigher spread with only a 1 minute and 5 seconds separating their top five. The Atlee girls were led by a top 10 finisher from Chloe Bavin (8th, 20:45) and will need more of a front running presence to challenge some of the traditional powers in the Central Region this fall, but certainly look to be a top 4 contending state berth team in that region.

Defending Central Region cross country champion Nathaniel Hall of Atlee won for the second consecutive weekend in the Central Virginia area after taking first last weekend at the Fork Union Invitational. The Atlee junior and VA #6 ranked Hall had a strong challenge from Stafford senior Ian Macleod (VA #7 ranked), but was able to pull away late for a solid time of 16:36 on the challenging and hilly Woodberry Forest School 5K layout. Macleod has been consistently strong in the first month of the cross country season, but had to settle for his third runner-up finish in a major invitational this fall (Great Meadow, Chancellor, and Woodberry Forest) with a time of 16:41. The returning Northwest Region 3200 meter outdoor champion Macleod is due for a breakthrough win at some point this season. His teammate Joey Abbatiello was the next finisher in third at 16:52 as the Stafford boys may not have a team this year ready to make a serious run at the state meet podium, but they definitely have two individuals who can get on there themselves between Macleod and Abbatiello.

The Brentsville boys are really asserting themselves as not only one of the best teams in Group AA, but one of the best teams in Virginia regardless of classification. Following a team win at the Chancellor Invitational against many ranked Group AAA schools, the Brentsville boys did it again at Woodberry Forest as their top four pack was impossible to break up. A quick 9 second wave of Brentsville runners came across the finish line from places 6 to 9 with Corey Tooke (6th, 17:17), Kyle King (7th, 17:21), Ben Lemons (8th, 17:24), and Mike Blair (9th, 17:25). Their fifth and final scorer was not too far behind in 18th place with a time of 17:47 for Richard Knab of Brentsville. Currently ranked #3 in Group AA behind Blacksburg and Lafayette, Brentsville is expected to leap over Lafayette for the #2 spot after Lafayette finished 5th at the William & Mary Invitational this weekend. With 48 points and a 17:27 team average, Brentsville took the team title at Woodberry Forest. Meanwhile, Oakton had a team score of 74 points and team average of 74 points to stick them right in the middle between Brentsville and 2011 Group AAA state champions Stafford (3rd, 11 pts). Oakton is looking to get out of a very competitive Northern Region this fall and saw a strong individual run from Jack Stoney garnering a fourth place finish at 17:05, while teammates David Atkinson (13th, 17:43) and Ricardo Manoatl (14th, 17:43) finished together just inside the top 15.